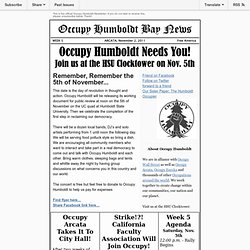 Threatening our Constitutional right to assemble in protest, police force has been used to bully protestors and insight violence. * In Occupy Oakland police launched tear gas, flash grenades, M80 explosives, and other 'non-lethal' weaponry at at protestors. During this action Scott Olsen was hospitalized with a fractured skull and remains in critical condition. Scott Olsen is a Marine who has served two tours of duty in Iraq. Youtube link to Scott Olsen incident. OccupyHumboldt. Occupy Humboldt Newsletter. Note: Updates and proposals from the December 5th meeting will be provided in next week's Humboldt Occupier. 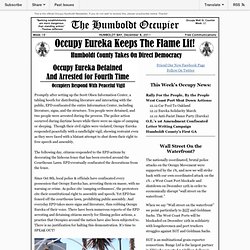 It is clear that, reports in the mainstream media notwithstanding, the Occupy movement continues to grow. A Field Poll released last week showed that 58% of Californians agree with the underlying reasons for Occupy. Some of our encampments may be dormant for now, but Occupy certainly is not. We are continuing with vigils, other direct action, outreach efforts, capacity building, and planning for the future. Our spirits are strong, and our will is unbroken. We understand that there were a variety of expectations for our first meeting, and that many hoped we would have moved through the unity issues more quickly. Resolution_2011-12-3_signed_copy. Occupy Colleges with #OccupyHumboldt. #OccupyHumboldt Global Occupation October 15th Bank Sit in. Occupy Humboldt October 14, 2011 06:11 PM. @blogdiva Are you kidding me? This is critical mass. #generalstrike #OO #ows @occupyoakland @mchammer. “Occupy Wall Street” Comes To Humboldt. Posted on 30 September 2011. 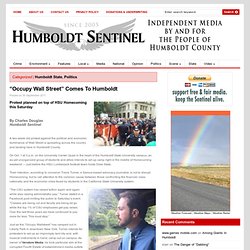 Protest planned on top of HSU Homecoming this Saturday By Charles DouglasHumboldt Sentinel A two-week old protest against the political and economic dominance of Wall Street is spreading across the country and landing here in Humboldt County. On Oct. 1 at 3 p.m. on the University Center Quad in the heart of the Humboldt State University campus, an as-yet unorganized group of students and allies intends to set up camp right in the middle of Homecoming weekend — just before the HSU Lumberjack football team hosts Dixie State. Their intention, according to convenor Travis Turner, a Samoa-based advocacy journalist, is not to disrupt Homecoming, but to call attention to the common cause between those confronting the financier class nationally and the economic crisis faced by students in the California State University system. Travis Turner “I see inequality and greed in almost every facet of American life,” Turner stated. Occupy Wall Street movement coming to HSU « The Humboldt Herald. 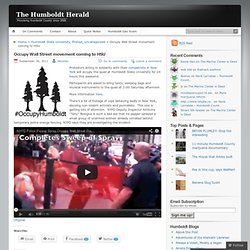 Participants are asked to bring tents, sleeping bags and musical instruments to the quad at 3:00 Saturday afternoon. More information here. There’s a lot of footage of cops behaving badly in New York, abusing non-violent activists and journalists. This one is getting lots of attention. Times-Standard: Occupy groups remain active throughout Humboldt County; law enforcement officials still monitoring the.

Megan Hansen/Times-Standard Posted: 10/26/2011 02:18:01 AM PDT# Comments|Updated: 2 years ago Law enforcement officials throughout Humboldt County said Tuesday that there are no plans to begin forcibly dispersing protesters despite actions being taken across the country and the arrest of two people associated with the Occupy Arcata group at the Arcata Plaza on Monday. 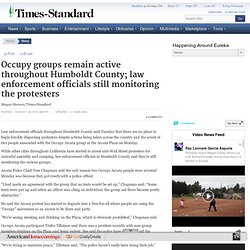 While other cities throughout California have started to arrest anti-Wall Street protesters for unlawful assembly and camping, law enforcement officials in Humboldt County said they're still monitoring the various groups. Arcata Police Chief Tom Chapman said the only reason two Occupy Arcata people were arrested Monday was because they got rowdy with a police officer. ”I had made an agreement with the group that no tents would be set up,” Chapman said.

He said the Arcata protest has started to degrade into a free-for-all where people are using the “Occupy” movement as an excuse to be there and party. The Arcata Eye: Occupy Humboldt Matures, Projects Protest To Community. The Occupy Humboldt camp on the Humboldt State Quad. 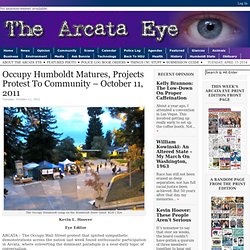 KLH | Eye Kevin L. Hoover Eye Editor. Occupy Humboldt, Unfiltered – October 28, 2011. Note: In response to queries from readers, we asked Occupy Humboldt activists why they take part in the Occupy movement and what they want? 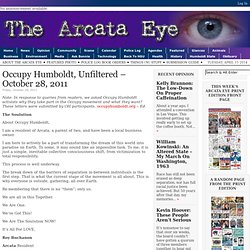 These letters were submitted by OH participants. occupyhumboldt.org – Ed. The Soulution About Occupy Humboldt, I am a resident of Arcata, a parent of two, and have been a local business owner. I am here to actively be a part of transforming the dream of this world into paradise on Earth. North Coast Journal: Guest Post: View from the Occupation. Humboldt BOS Shuts Down 1st Amendment. Following an article in our last edition (January 22, 2012), "Become Part of the Process, Not Just the Protest" HSU's PR man, Mr. 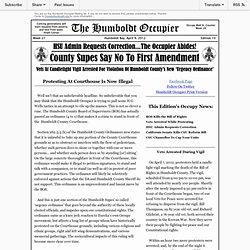 Paul Mann, requested that the Occupier issue a correction. Mr. Mann felt we wrongly inferred that the Board of Trustees (BOT) makes all decisions with respect to the CSU system, while in reality the BOT is only one of multiple decision makers that guide CSU fiscal and educational policy. After consideration the Occupier must admit that Mr. Mann has a point, and that we should have been more exact in our explanation of the CSU decision making process. The BOT makes many decisions for all the CSUs; some of those decisions include tuition hikes and salaries hikes for CSU presidents.