Campus uncut ( @campusuncut ) Occupy On Campus — Building a National Database. As the spring semester gets underway, I’ll be launching a major new project — a national database of campus Occupy projects. 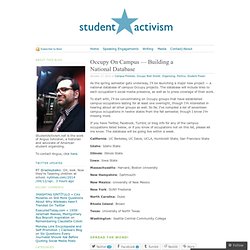 The database will include links to each occupation’s social media presence, as well as to press coverage of their work. To start with, I’ll be concentrating on Occupy groups that have established campus occupations lasting for at least one overnight, though I’m interested in hearing about all other groups as well. So far, I’ve compiled a list of seventeen campus occupations in twelve states from the fall semester, though I know I’m missing more. If you have Twitter, Facebook, Tumblr, or blog info for any of the campus occupations listed below, or if you know of occupations not on this list, please let me know. The database will be going live within a week. California: UC Berkeley, UC Davis, UCLA, Humboldt State, San Francisco State Idaho: Idaho State Illinois: Illinois State Iowa: Iowa State Massachusetts: Harvard, Boston University. New Map of 2011-12 Campus Occupations. What you see below is the first step toward a comprehensive interactive map of all American campus occupations during the 2011-12 academic year. 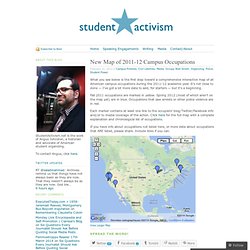 Essay on why Occupy movement disrupts speakers on campus. Colleges and universities increasingly face tough decisions regarding how to deal with manifestations of the growing Occupy movement on their campuses. We are all now well aware of the intense negative press the University of California at Davis and its chancellor, Linda Katehi, received after a group of peacefully seated protesters were pepper-sprayed by a campus police officer. Since then, new incidents have made headlines: Students associated with the Occupy movement have been disrupting public presentations by academics, activists, and politicians (most of whom identify as conservative).

The protesters delivered messages or rebuttals to the person on stage using a practice called "the human microphone. " The human microphone amplifies a speaker’s voice by having many people repeat the speaker's words in unison. Why Is Congress Redlining Our Schools? Redlining was the once-common practice in which banks would draw a red line on a map—often along a natural barrier like a highway or river—to designate neighborhoods where they would not invest. 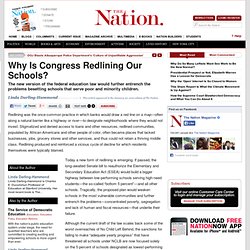 Stigmatized and denied access to loans and other resources, redlined communities, populated by African-Americans and other people of color, often became places that lacked businesses, jobs, grocery stores and other services, and thus could not retain a thriving middle class. Redlining produced and reinforced a vicious cycle of decline for which residents themselves were typically blamed. About the Author. UMass Amherst Occupy protest resembles Irvine case. When a group of University of California at Irvine students carried out a planned disruption of a campus speech by the Israeli ambassador to the United States in February 2010, not only did the university suspend the Muslim Student Union, which organized the protest, but 10 of the 11 students arrested that day were ultimately found guilty of misdemeanors in an Orange County court – for conspiring to disrupt a public speech, and disrupting it, in effect censoring the speaker. 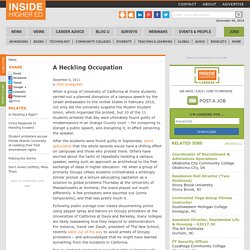 After the students were found guilty in September, some speculated that the whole episode would have a chilling effect on campuses and those who protest there. Others have worried about the tactic of repeatedly heckling a campus speaker, seeing such an approach as antithetical to the free exchange of ideas in higher education. Teachers Protest, NYPD Officers Don Riot Helmets. This morning I attended an event at Washington Irving High School, in Manhattan’s Gramercy neighborhood, to protest the proposed closing of the school. 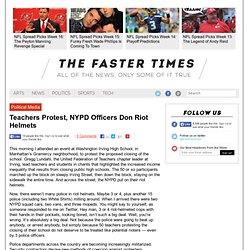 Gregg Lundahl, the United Federation of Teachers chapter leader at Irving, lead teachers and students in chants that highlighted the increased income inequality that results from closing public high schools. Occupy california. Lawrence Lessig Extended Interview Pt. 1 - The Daily Show with Jon Stewart - 12/13. This Week In Occupy: Nov. 28th - Dec. 4th. How the UC Regents Spin Public Funds into Private Profit. “As universities become glorified vocational schools for corporations they adopt values and operating techniques of the corporations they serve.” – Chris Hedges (Empire of Illusion, 2009) This piece has been republished by The Berkeley Daily Planet. 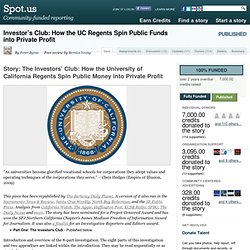 A version of it also ran in the Sacramento News & Review, Santa Cruz Weekly, North Bay Bohemian, and the SF Public Press. Analysis from California Watch, The Aggie, Huffington Post, KCSB Radio, SFBG, The Daily Nexus and more. The story has been nominated for a Project Censored Award and has won the SPJ Northern California Chapter's James Madison Freedom of Information Award for Journalism.

It was also a finalist for an Investigative Reporters and Editors award. Part One: The Investor's Club - Published below. Silent Majority: California's War on its Students. John Thompson: Diane Ravitch and the History That "Reformers" Do Not Know. Diane Ravitch has again done the seemingly impossible. 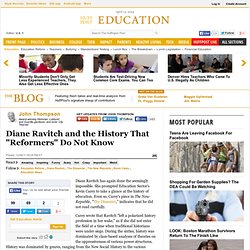 She prompted Education Sector's Kevin Carey to take a glance at the history of education. Even so, Carey's piece in The New Republic, "The Dissenter," indicates that he did not read carefully. The roots of the UC-Davis pepper-spraying. Matthew Noah Smith: Open Letter to Chancellors and Presidents of American Universities and Colleges. This letter has been co-signed by 1,200 university faculty and counting. 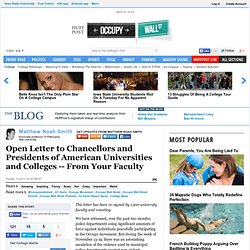 We have witnessed, over the past two months, police departments using significant amounts of force against individuals peacefully participating in the Occupy movement. But during the week of November 13-19, there was an astonishing escalation of the violence used by municipal police departments against non-violent protesters. We hoped that even as politicians and municipal police violently responded to the Occupy movement, college and university campuses would remain safe locations for non-violent political dissent. But that has not been the case. In fact, universities and colleges appear to be using the same tactics in their interactions with unarmed, non-violent members of the university community as we have seen municipal police use against the broader Occupy movement.

In particular, we are concerned with the actions by police associated with two University of California campuses. Cshirky: UC Davis head Katehi also... Occupy Colleges. OccupyColleges (@OccupyColleges) sur Twitter. Occupy Colleges. Consensus on the National Student Day of Action. Views: Why Occupy Colleges? At noon Wednesday, thousands of college students from at least 75 colleges walked out of class as part of Occupy Colleges, which is the collegiate version of Occupy Wall Street. Students are angry and they want to show their support for the 99 percent of American citizens whom they feel are being ignored by our political leaders and fleeced by Wall Street.

Given the Arab Spring and the unrest caused by the youth in these countries, is it surprising that America could be on the brink of a College Fall? They are angry about the debt that many of them must obtain to go to college and that their employment opportunities look vastly different from the way they did in the fall of 2007. They are stunned by the lack of economic progress over the last three years.

Certainly a freshman in the fall of 2008, when Lehman Brothers failed, thought that things would be fixed by the time he graduated from college. In 2009, the average college debt for a graduating senior with debt was $24,000. Nought 101 » Where are the college occupiers? Occupy Wall Street’s academic affiliate, Occupy Colleges, is slow to catch on in Vermont. 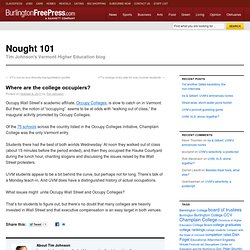 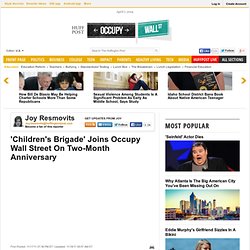 "We have power, we have friends, nothing will stop us, we fight till the end! " Kids Speak At Occupy Wall Street. Video - Breaking News Videos from CNN.com. D.C. schools: charter or public? - The Root DC Live. Last week, I was talking to a couple planning to leave a D.C. charter school. It's Not Just About Lighter Backpacks. When Education Secretary Arne Duncan and Federal Communications Commission Chairman Julius Genachowski spoke at the first ever "Digital Learning Day" this Wednesday and pushed schools to get digital textbooks in students' hands within five years, it marked a vital recognition that technology can help us re-imagine teaching and learning. But during Super Bowl week it's equally important to admit that, as nifty (and lightweight) as digital textbooks may sound, when it comes to realizing the potential of education technology to lift student achievement, we're still on our own 5 yard line. High-schoolers on strike.

In a short video released last week, a group of students from New York’s Paul Robeson High School stand in an unremarkable classroom: school bags slung over wooden chairs and busy pinboards in the background. Their message, however, is a radical one: at front and center of the shot, a young man holding a white sheet of paper announces a mass high school student walkout on May 1, the day of the Occupy-planned general strike. “Dear New York City. OCCUPY EDUCATION. 27th March 2014 Link with 1 note EmpowerED: Los Angeles Student Power 2014 → Education Advocacy Organizations: An Overview. Our guest author today is Ken Libby, a graduate student studying educational foundations, policy and practice at the University of Colorado at Boulder.