Therefore, a conflict of interest can be discovered and voluntarily defused before any corruption occurs. A widely used definition is: "A conflict of interest is a set of circumstances that creates a risk that professional judgement or actions regarding a primary interest will be unduly influenced by a secondary interest. "[1] Primary interest refers to the principal goals of the profession or activity, such as the protection of clients, the health of patients, the integrity of research, and the duties of public office.

Secondary interest includes not only financial gain but also such motives as the desire for professional advancement and the wish to do favours for family and friends, but conflict of interest rules usually focus on financial relationships because they are relatively more objective, fungible, and quantifiable. Related to the practice of law[edit] 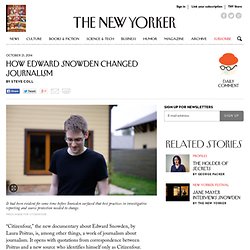 It opens with quotations from correspondence between Poitras and a new source who identifies himself only as Citizenfour. This source turns out to be Snowden. Soon, Poitras and Glenn Greenwald, at the time a columnist for the Guardian, travel to Hong Kong to meet Snowden in a hotel room. They don’t know, at this point, if Snowden is who he says he is. They don’t know if his materials are authentic. Snowden comes across in the film as shrewd, tough, and hard to read. In fact, one of the least remarked upon aspects of the Snowden matter is that he has influenced journalistic practice for the better by his example as a source.

Reporters communicate copiously; encryption makes that habit more cumbersome. It took an inside expert with his life and liberty at stake to prove how much encryption and related security measures matter. Citizenfour Official Trailer 1 (2014) - Edward Snowden Documentary HD. 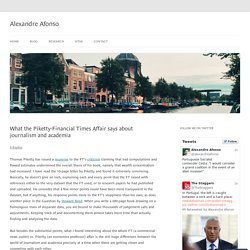 I have read the 10-page letter by Piketty and found it extremely convincing. Basically, he doesn’t give an inch, explaining each and every point that the FT raised with references either to the very dataset that the FT used, or to research papers he had published and uploaded. He concedes that a few minor points could have been more transparent in the dataset, but if anything, his response points more to the FT’s sloppiness than his own, as does another piece in the Guardian by Howard Reed.

When you write a 600-page book drawing on a humongous mass of disparate data, you are bound to make thousands of judgement calls and adjustments. Keeping track of and documenting them almost takes more time than actually finding and analysing the data. The second difference is perhaps cohesiveness. 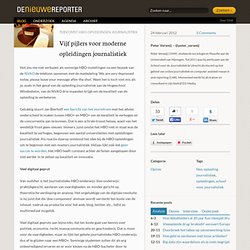 Journalism Education. Toolkit for better and accurate reporting. Future of Journalism. Tools. To sort. Page One: Inside The New York Times Trailer HD 2011. Möbius Strip Journalism - JayRosen. Who says print is dead? Despite what you may have heard, reports of the "death of print" have been greatly exaggerated. 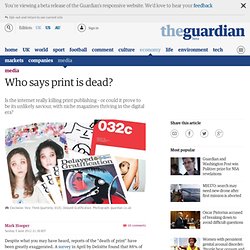 A survey in April by Deloitte found that 88% of magazine readers in the UK still prefer to consume articles via print. While half of respondents to its state-of-the-media survey (2,276 UK consumers, aged 14 to 75) owned a smartphone, 35% subscribed to at least one printed magazine in 2011. Of course, with the adoption of tablet devices on the rise, this figure could well be out of date already – particularly given the rapid improvement in the quality of digital publications, and the demand for them to do more than merely replicate the content of print titles online. But, regardless of some high-profile print closures in recent years, the stories of doom and gloom in the publishing industry have been tempered by a mini renaissance in independent titles.

And old-fashioned paper and ink has an unlikely saviour. But it's not just amateurs who are responsible. Which brings us neatly to Google. Layar Creator laat print leven - Digitaal - Telegraaf.nl [24 uur actueel, ook mobiel] [Digitaal] Layar Creator voor interactieve print: kans of bedreiging? RTL Group - wikipedia. From Wikipedia, the free encyclopedia RTL may refer to: 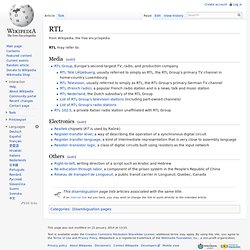