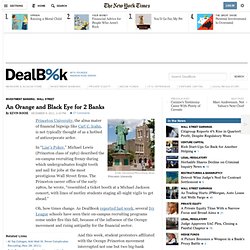 Icahn, is not typically thought of as a hotbed of anticorporate ardor. In “Liar’s Poker,” Michael Lewis (Princeton class of 1982) described the on-campus recruiting frenzy during which undergraduates fought tooth and nail for jobs at the most prestigious Wall Street firms. The Princeton career office of the early 1980s, he wrote, “resembled a ticket booth at a Michael Jackson concert, with lines of motley students staging all-night vigils to get ahead.” 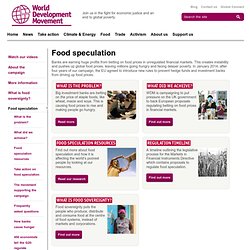 This creates instability and pushes up global food prices, leaving millions going hungry and facing deeper poverty. In January 2014, after four years of our campaign, the EU agreed to introduce new rules to prevent hedge funds and investment banks from driving up food prices. What is the problem? Big investment banks are betting on the price of staple foods, like wheat, maize and soya. This is causing food prices to rise and making people go hungry. Read more What did we acheive? WDM is campaigning to put pressure on the UK government to back European proposals regulating betting on food prices in financial markets. Find out more Regulation timeline A timeline outlining the legislative process for the Markets in Financial Instruments Directive which contains proposals to regulate food speculation. 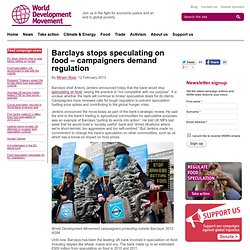 It is unclear whether the bank will continue to broker speculative deals for its clients. Campaigners have renewed calls for tough regulation to prevent speculation fuelling price spikes and contributing to the global hunger crisis. Jenkins announced the move today as part of the bank’s strategic review. He said the end to the bank’s trading in agricultural commodities for speculative purposes was an example of Barclays “putting its words into action”. He told UK MPs last week that he would build a “socially useful” bank and “shred situations where we're short-termist, too aggressive and too self-centred.” World Development Movement campaigners protesting outside Barclays' 2012 AGM Until now, Barclays has been the leading UK bank involved in speculation on food including staples like wheat, maize and soy. 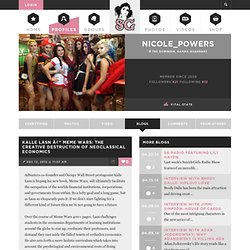 Its a lofty goal and a long game, but as Lasn so eloquently puts it: If we don't start fighting for a different kind of future then we're not going to have a future. Over the course of Meme Wars 400+ pages, Lasn challenges students in the economics departments of learning institutions around the globe to rise up, reeducate their professors, and demand they cast aside the failed tenets of orthodox economics. He also sets forth a more holistic curriculum which takes into account the psychological and environmental costs of doing business and redefines the concept of wealth to include mental and ecological health. We spoke with Lasn, who was born in Estonia but is Vancouver based, by phone. Nicole Powers: The book is absolutely beautiful, but why call it Meme Wars?