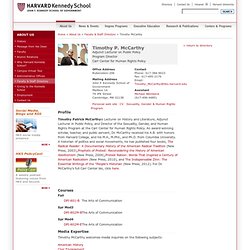 Kennedy School of Government Mailbox 14 79 JFK Street Cambridge, MA 02138 Profile Timothy Patrick McCarthyis Lecturer on History and Literature, Adjunct Lecturer in Public Policy, and Director of the Sexuality, Gender, and Human Rights Program at the Carr Center for Human Rights Policy. Courses Fall. Ahmed Maher, organizer of Egypt's Spring uprising. Ahmed Maher (youth leader) Maher, 2012 Ahmed Maher (born 2 December 1980 in Alexandria) is one of the co-founders of the April 6 Youth Movement, and a prominent participant in the anti-Mubarak demonstrations in Egypt in 2011.[1][2] He is a civil engineer[3] who works for a construction firm in New Cairo.

Maher attempted to organize several demonstrations after April 2008.[4] However, his efforts were hindered both by interference from Egyptian security forces[5][6] and internal divisions within the April 6 movement. In June 2010, Maher helped organize a protest against the killing, by Egyptian police, of Khaled Said, a young resident of Alexandria. Maher has expressed support for the potential bid of Mohamed ElBaradei for the Egyptian presidency.[7] He appeared in the 2011 BAFTA award-winning film, How to Start a Revolution. 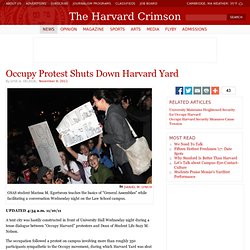 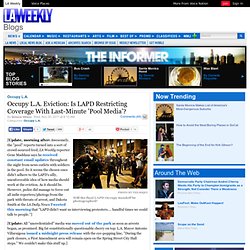 [Update, morning after: Awesomely, the "pool" reports turned into a sort of crowd-sourced feed; LA Weekly reporter Gene Maddaus says he received constant email updates throughout the night from news outlets with soldiers in the pool. So it seems the chosen ones didn't adhere to the LAPD's silly, unenforceable idea of how media should work at the eviction. As it should be. However, police did manage to force out all indie reporters/photogs from the park with threats of arrest, and Dakota Smith at the LA Daily News Tweeted this morning that "LAPD didn't want us interviewing protesters.... handful times we could talk to people.

"] [Update: All "uncredentialed" media was moved out of the park as soon as arrests began, as promised. [Update: Predictably, though the LAPD instructed them not to, a few reporters in the pool are Tweeting anyway. The pending Occupy L.A. eviction is a trickier beast. Ruth Fowler: LAPD Made Sure The Whole World Ain't Watching.

As both a journalist who occasionally freelances for the mainstream media, and an Occupier, I find myself in a conflicted position regarding reporting on Occupy LA. 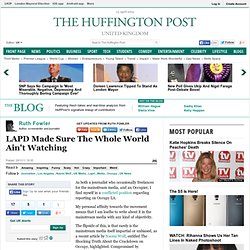 My personal affinity towards the movement means that I am loathe to write about it in the mainstream media with any kind of objectivity. The flipside of this, is that rarely is the mainstream media itself impartial or unbiased, as a recent article by Naomi Wolf, entitled The Shocking Truth About the Crackdown on Occupy, highlighted. Compromised by corporations, politics and money, the media's agenda is rarely as simple as reporting the truth. Occupy Harvard's first night. Occupy Harvard Nov. 9. WikiLeaks Truck arrives at #MIT loading dock to receive suppl. Art Superheroes: @Lockean I got arrested wh... Kgz77ltj Shared by effiemichelle. Gene: @occupy_harvard John Harv... Aaron Bady: #OccupyHarvard has these t... Harvard Gazette: Message to the Harvard community. Last night, several hundred demonstrators converged on the Harvard campus to express their support for the Occupy movement. The demonstrators consisted of people from within and outside the Harvard community. 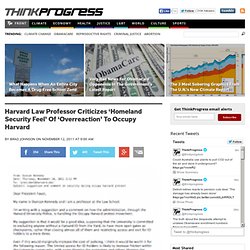 On Wednesday night, hundreds of Occupy protesters marched from a rally at Harvard Law School to enter the heart of the world’s most prestigious university, blocked by Harvard security forces who began closing the iron gates that are normally kept open 24 hours a day. Harvard students, allowed in after showing identification, set up about 20 tents in the yard with the help of other students who joined when word went out about the lockdown.