Occupy Variations. User Groups Directory. Hey G20, Here Comes #ROBINHOOD. 29okt#RobinHood Global March. Alright you redeemers, rebels and radicals out there, We're living through a magical moment … #OCCUPYWALLSTREET has catalyzed into an international insurgency for democracy … the mood at our assemblies is electric … people who go there are drawn into a Gandhian spirit of camaraderie and hope for a new kind of future. 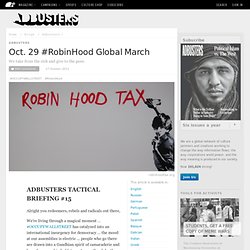 Across the globe the 99% are marching! You have inspired more than you know. People are digging into Act One of the long Spring. Its now time to amp up the edgy theatrics … deviant pranks, subversive performances and playful détournements of all kinds. As the movement matures, lets consider a response to our critics. 5nov Bank Transfer Day. World R-love-ution - 11.11.11. Occupiers plan epic New York to Washington march.

Persistent criticism of Occupy Wall Street for failing to specify demands has helped obscure the fact that groups of people within the movement have been mobilizing around concrete political goals. 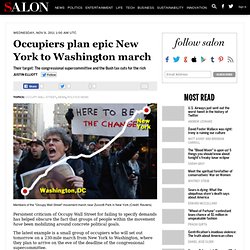 The latest example is a small group of occupiers who will set out tomorrow on a 230-mile march from New York to Washington, where they plan to arrive on the eve of the deadline of the congressional supercommittee. The marchers’ message to the supercommittee: cut the Bush tax cuts on the rich in order to help balance the budget and save badly needed social programs. (Those tax cuts were extended by President Obama and Congress after a fight last year.) “If there’s a message, it’s that we’re paying attention now,” says Michael Glazer, 26, one of the march organizers. Glazer is an unemployed actor from Chicago who has been sleeping in Zuccotti Park, the center of the Occupy Wall Street movement, for a month. Marchers plan to hold assemblies each night. 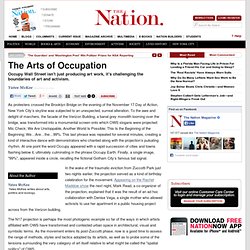 To the awe and delight of marchers, the facade of the Verizon Building, a banal grey monolith looming over the bridge, was transformed into a monumental screen onto which OWS slogans were projected: Mic Check; We Are Unstoppable, Another World Is Possible; This Is the Beginning of the Beginning; We…Are…the…99%. This last phrase was repeated for several minutes, creating a kind of interactive dance with demonstrators who chanted along with the projection’s pulsating rhythm. At one point the word Occupy appeared with a rapid succession of cities and towns flashing below it, ultimately culminating in the phrase Occupy Earth. Finally, a single image, "99%", appeared inside a circle, recalling the fictional Gotham City’s famous bat signal.

"violent OWS" is a contradictio in terminis, so how does OWS

Satire parody mock etc: G8 and NATO #OCCUPYCHICAGO Tactical Briefing #25. Hey you redeemers, rebels and radicals out there, Against the backdrop of a global uprising that is simmering in dozens of countries and thousands of cities and towns, the G8 and NATO will hold a rare simultaneous summit in Chicago this May. 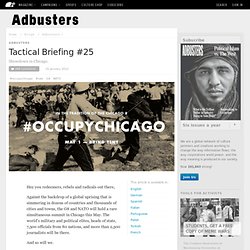 The world’s military and political elites, heads of state, 7,500 officials from 80 nations, and more than 2,500 journalists will be there. And so will we. On May 1, 50,000 people from all over the world will flock to Chicago, set up tents, kitchens, peaceful barricades and #OCCUPYCHICAGO for a month. With a bit of luck, we’ll pull off the biggest multinational occupation of a summit meeting the world has ever seen. And this time around we’re not going to put up with the kind of police repression that happened during the Democratic National Convention protests in Chicago, 1968 … nor will we abide by any phony restrictions the City of Chicago may want to impose on our first amendment rights. 40 DAYS THAT SHOOK THE WORLD: From Occupy Wall Street to Occupy Everywhere eBook: Greg Mitchell. @OccupyIntNews.

Anonymous: Live Streaming from inside... 2 #OWS 17sept2012. Confronting Despair. This is a blog about strong emotions and how these impact our actions. 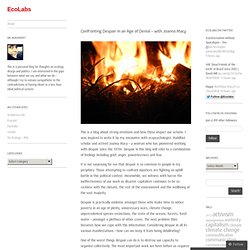 I was inspired to write it by my encounter with ecopsychologist, Buddhist scholar and activist Joanna Macy – a woman who has pioneered working with despair since the 1970s. Despair in this blog will refer to a combination of feelings including grief, anger, powerlessness and fear. It is not surprising for me that despair is so common to people in my periphery. Those attempting to confront injustices are fighting an uphill battle in this political context.