Reports Reveal Two New Scandals in the Pepper-Spraying at UC Davis - Conor Friedersdorf - Politics. An official investigation suggests there was no legal basis for the raid on the students that day. 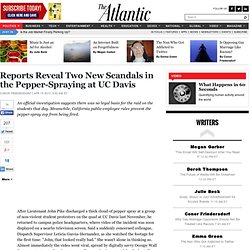 Meanwhile, California public employee rules prevent the pepper-spray cop from being fired. After Lieutenant John Pike discharged a thick cloud of pepper spray at a group of non-violent student protesters on the quad at UC Davis last November, he returned to campus police headquarters, where video of the incident was soon displayed on a nearby television screen. Said a suddenly concerned colleague, Dispatch Supervisor Leticia Garcia-Hernandez, as she watched the footage for the first time: "John, that looked really bad. " She wasn't alone in thinking so. Almost immediately the video went viral, spread by digitally savvy Occupy Wall Street protesters and mainstream media organizations struck by the brutality of the scene. 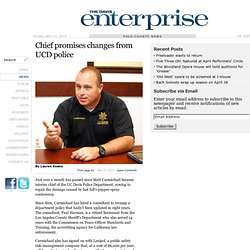 Since then, Carmichael has hired a consultant to revamp a department policy that hadn’t been updated in eight years. The consultant, Paul Harman, is a retired lieutenant from the Los Angeles County Sheriff’s Department who also served 14 years with the Commission on Peace Officer Standards and Training, the accrediting agency for California law enforcement. Carmichael also has signed on with Lexipol, a public safety risk-management company that, at a cost of $6,000 per year, will keep that revised policy in sync with changes in state and federal law, as well as law-enforcement best practices. It also provides daily, interactive training bulletins for the agency’s employees once the policy update is complete.

Pepper Spraying Victims Receive $1Million Settlement. The University of California system announced Wednesday they will pay $30,000 in damages to each of the 21 students and alumni who were sprayed at a peaceful protest against budget cuts and tuition hikes last November. 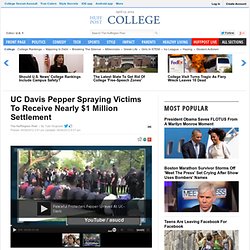 The American Civil Liberties Union of Northern California, which represents the victims, and the UC submitted the settlement for approval by a federal court this week, KCRA reports. The total settlement reaches nearly $1 million: $30,000 to each victim, $250,000 in attorneys fees and a requirement for UC to set aside $100,000 for anyone else who can prove their were harmed or arrested during the incident. "What happened on November 18 was among the worst examples of police violence against student demonstrators that we’ve seen in a generation," Michael Risher, staff attorney with the ACLU of Northern California, said in a statement. UC Davis, pepper-sprayed students settle. The University of California will pay out $630,000 to 21 UC Davis students who were doused with pepper spray by campus police during a videotaped protest in November that the Occupy movement used as the iconic example of excessive police force. 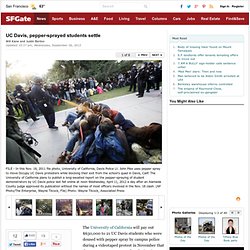 The students will each receive about $30,000 and a written apology from the university chancellor, according to the terms of a $1 million legal settlement announced Wednesday. The agreement also calls on university officials to work with civil liberty advocates to modify crowd control policies and police response tactics. The video images from the Nov. 18 protest, which showed police in riot helmets unleashing the chemical irritant on students who were seated with arms linked, galvanized the Occupy movement and led to international condemnation of the officers. Among other things, the students were protesting steep tuition hikes and the public university's increasing financial ties to corporations. No applause 'Police free' “Pepper-spray Lawsuit Ending” Speech. Hi. SNSR: Occupy-studenten krijgen riante schadevergoeding. 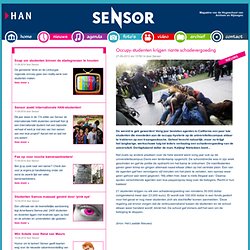 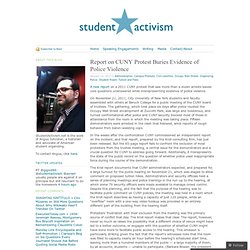 On November 21, 2011, City University of New York students and faculty assembled with others at Baruch College for a public meeting of the CUNY board of trustees. The gathering, which took place six days after police rousted the Occupy Wall Street encampment at Zuccotti Park, was large and boisterous, and turned confrontational after police and CUNY security blocked most of those in attendance from the room in which the meeting was taking place.

Pepper-spray investigators have UCD ties Davis Enterprise. UC Davis has hired to investigate the arrest and pepper-spraying of protesters a law firm with past links to the university’s administration. 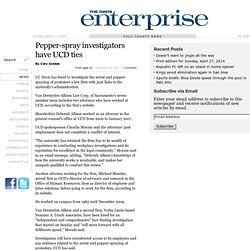 Van Dermyden Allison Law Corp. of Sacramento’s seven-member team includes two attorneys who have worked at UCD, according to the firm’s website. Shareholder Deborah Allison worked as an attorney in the general counsel’s office at UCD from 2000 to January 2007. UCD spokesperson Claudia Morain said the attorneys’ past employment does not constitute a conflict of interest. “The university has retained the firm due to its wealth of experience in conducting workplace investigations and its reputation for excellence in the legal community,” Morain said in an email message, adding, “Deborah Allison’s knowledge of how the university works is invaluable, and makes her uniquely qualified to conduct this review.”

He worked on campus from 1985 until December 2009. UC Davis pepper- spray officer award- ed $38,000 by univ: (10-23) 17:18 PDT DAVIS -- A former UC Davis police officer whose pepper-spraying of protesters gained worldwide notice thanks to a viral video has been awarded more than $38,000 in workers' compensation from the university for suffering he experienced after the incident. 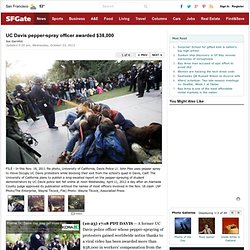 Former police Lt. Controversy at UC Davis escalates into wider debate on presidents on corporate boards. The debate started over a specific kind of corporate board: that of a for-profit education company. 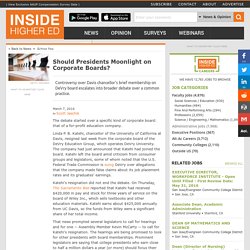 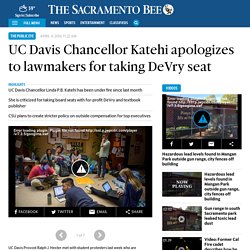 Katehi apologized to lawmakers Monday for what she called a lapse in judgment in accepting a seat on the board of the DeVry Education Group. “This will not happen again,” Katehi told lawmakers during an Assembly oversight hearing examining outside compensation for university leaders. Katehi has been under fire for more than a month after The Sacramento Bee reported about her February decision to accept a board seat with the DeVry Education Group and past board tenure with a textbook publisher. The controversy could lead to changes in policies governing outside executive pay at both the University of California and California State University systems, according to testimony from representatives of both university systems.

“We don’t believe outside employment is an issue at CSU,” said Carrie Hemphill Rieth, university counsel at California State University. All California State University presidents will be required to report outside employment, she said. UC Davis Chancellor Linda Katehi quits DeVry board under pressure. When UC Davis Chancellor Linda P.B. Linda Katehi must explain DeVry blunder; UC must examine policy. Big public universities are complex institutions. The people who run them must be part CEO, part academic, part rainmaker, part diplomat. And part mover and shaker. A major aspect of the job, at the University of California and elsewhere, involves developing relationships with private sector players that rely on universities for workers and wisdom. Though the UC has one president managing the system, the chancellors who run its 10 campuses operate like college presidents in their own right.

They join nonprofits and community organizations, hobnob with potential donors, sit on boards of corporations and generally nurture strong community contacts. Why UC Davis Chancellor Linda P.B. Conflict of interest alleged between UC president and investigator in Katehi case. UC Davis Academic Senate issues letter claiming professional and social connection between Janet Napolitano and Melinda Haag. Concerns are arising about the investigation into Chancellor Linda P.B. Katehi’s tenure as head of UC Davis. Critics are speculating about a possible conflict of interest involving the head private investigator, Melinda Haag, and the University of California President, Janet Napolitano, questioning whether the probe of Katehi is truly unbiased. Haag is a former United States attorney for the Northern District of California who served under the Obama administration from August 2010 to September 2015. #maagdenhuis ;-)) Hey Linda Katehi, if you pay me to delete this post, I will.

When universities try to behave like businesses, education suffers.