The Internet has reversed the assumption that justified copyright. Falckvinge: History of Copyright, part 1: Black Death. In this seven-part series, I will look at the history of copyright from 1350 until present day. 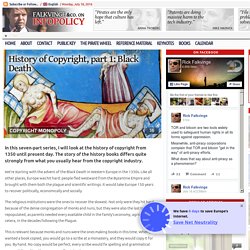 The story of the history books differs quite strongly from what you usually hear from the copyright industry. We’re starting with the advent of the Black Death in Western Europe in the 1350s. Like all other places, Europe was hit hard: people fled westward from the Byzantine Empire and brought with them both the plague and scientific writings. It would take Europe 150 years to recover politically, economically and socially. History of Copyright, part 2: Bloody Mary. On May 23, Mary was formally declared a bastard by the archbishop. 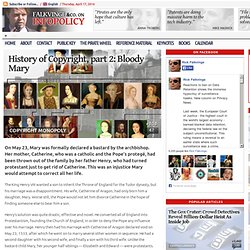 Her mother, Catherine, who was a catholic and the Pope’s protegé, had been thrown out of the family by her father Henry, who had turned protestant just to get rid of Catherine. This was an injustice Mary would attempt to correct all her life. History of Copyright, part 3: The Monopoly Dies – And Rises. After Bloody Mary had enacted the copyright censorship monopoly in 1557, neither the profitable industry guild nor the censoring Crown had any desire to abolish it. 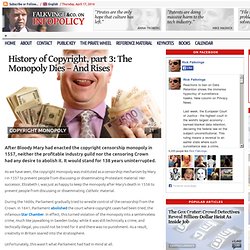 It would stand for 138 years uninterrupted. As we have seen, the copyright monopoly was instituted as a censorship mechanism by Mary I in 1557 to prevent people from discussing or disseminating Protestant material. Her successor, Elizabeth I, was just as happy to keep the monopoly after Mary’s death in 1558 to prevent people from discussing or disseminating Catholic material. History of Copyright, part 4: The US and Libraries. When the United States was founded, the concept of monopolies on ideas was carried to the New World and debated intensely. 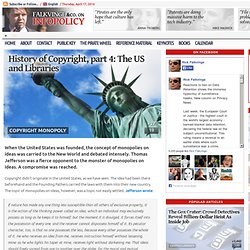 Thomas Jefferson was a fierce opponent to the monster of monopolies on ideas. A compromise was reached. Copyright didn’t originate in the United States, as we have seen. The idea had been there beforehand and the Founding Fathers carried the laws with them into their new country. History of Copyright, part 5: Moral Rights. In the late 1800s, the publishers’ ever-strengthening copyright monopoly had lopsided the creators’ chances of making any revenue off of their works. 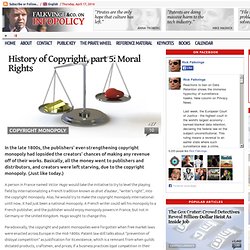 Basically, all the money went to publishers and distributors, and creators were left starving, due to the copyright monopoly. (Just like today.) A person in France named Victor Hugo would take the initiative to try to level the playing field by internationalizing a French tradition known as droit d’auteur, “writer’s right”, into the copyright monopoly. History of Copyright, part 6: Hijacked By Record Industry. During most of the 20th century, a battle of prominence raged between performing musicians and the record industry. 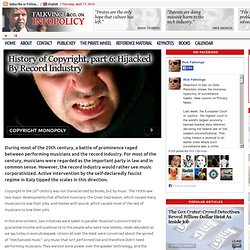 For most of the century, musicians were regarded as the important party in law and in common sense. However, the record industry would rather see music corporativized. History of Copyright, part 7: Hijacked by Pfizer. Toyota struck at the heart of the American soul in the 1970s, and all her politicians started carrying mental “The End Is Nigh” signs. 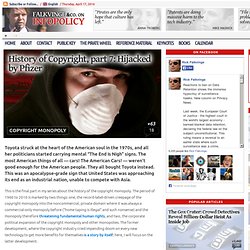 The most American things of all — cars! The American Cars! — weren’t good enough for the American people. They all bought Toyota instead. This was an apocalypse-grade sign that United States was approaching its end as an industrial nation, unable to compete with Asia. Freedom of the Press Foundation. @FreedomofPress. FreedomofPress : We tried to write a kickass... JPBarlow : I join Ellsberg, Greenwald,... Daniel Ellsberg: Crowd Funding the Right to Know. "A cantankerous press, an obstinate press, an ubiquitous press must be suffered by those in authority in order to preserve the even greater values of freedom of expression and the right of the people to know. " -- Judge Murray Gurfein, Pentagon Papers case, June 17, 1971 In December 2010, WikiLeaks started publishing a selection of leaked U.S. New press freedom group is launched to block US government attacks. Several weeks ago, I wrote about the steps taken by the US government to pressure large corporations to choke off the finances and other means of support for WikiLeaks in retaliation for the group's exposure of substantial government deceit, wrongdoing and illegality. 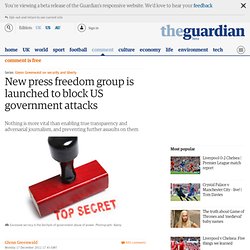 Because WikiLeaks has never been charged with, let alone convicted of, any crime, I wrote: "that the US government largely succeeded in using extra-legal and extra-judicial means to cripple an adverse journalistic outlet is a truly consequential episode. " At the end of that column, I disclosed that I had been involved in discussions "regarding the formation of a new organization designed to support independent journalists and groups such as WikiLeaks under attack by the US and other governments.

The goal is to insulate those groups’ fund-raising efforts from political and business pressures. In December 2010, Visa, MasterCard and PayPal announced that they would no longer accept transactions for WikiLeaks, the online leak group that released thousands of secret documents from the American government. The move to cut off donations, which came after vocal protests against the organization’s activities from members of Congress, eliminated the vast majority of financing for WikiLeaks.

“We believe in openness in government, in transparency, and we don’t think that WikiLeaks alone should have to bear that burden,” Mr. Mr. Group aids reporting that exposes secrecy. A group of journalists, activists and celebrities has formed the Freedom of the Press Foundation, a nonprofit that will crowdsource funding for journalism that exposes secrecy and corruption in government and corporations. The impetus for the group dates to 2010, when whistle-blowing outfit WikiLeaks released thousands of pages of cables sent to and from U.S.

State Department officials. Why we all have a stake in the Freedom of the Press Foundation. Two years ago this month, the major online payment systems – Visa, Mastercard, PayPal and more – cut off one of the world's most famous journalism organizations from the public. 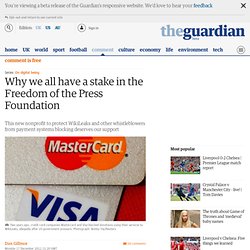 They stopped taking payments on behalf of WikiLeaks and, in the process, highlighted one of the most dangerous threats to modern journalism: the ability of centralized third parties to make trouble for anyone and any organization they didn't like, for whatever reason. With a few exceptions, the traditional journalism industry has been all but indifferent to what happened – a payment boycott done almost certainly under pressure from the American government, which was and remains infuriated by WikiLeaks' methods and results.

No other journalism-related organization has been treated this way, as far as I know. Group Launches to Encourage Transparency & Aggressive Journalism, Help WikiLeaks Survive Blockade. (update 1 & 2 below) A foundation dedicated to promoting and funding aggressive journalism and media organizations that push for transparency and accountability in government is launching on Monday. Called the Freedom of the Press Foundation (FPF), it hopes to help organizations like WikiLeaks combat censorship and even prevent the watering down of coverage because of corporate or government pressures. The organization is co-founded by Pentagon Papers whistleblower Daniel Ellsberg and John Perry Barlow, a former lyricist for the Grateful Dead who co-founded the Electronic Frontier Foundation (EFF), Rainey Reitman, a founder and steering committee member for the Bradley Manning Support Network, and Trevor Timm, who is a writer and activist for EFF.

Reitman shared how the idea had come from something that had been discussed for months. Timm said FPF wants to be a “Red Cross for journalism.” Classification and secrecy is at an all-time high. Pirate Party Presses Charges Against Banks For WikiLeaks Blockade. Today, the Swedish Pirate Party filed formal charges against Swedish banks for their discrimination against WikiLeaks, which has been systematically denied donations by payment providers since 2010.

Numerous payment service providers, including Visa, MasterCard, and PayPal, have blocked donations to WikiLeaks and other legal operations since 2010. Banks have been a part of the network of these service providers, which means that the banks actively participate in stopping donations without legitimate grounds. The Swedish Pirate Party says that this behavior is unacceptable and cause for grave concern, and has filed charges against the Swedish banks in question to try this behavior in court. The charges were filed earlier today with the Swedish Finansinspektionen, the authority which oversees bank licenses and abuse of position. Donate Anonymously to WikiLeaks. John Cusack: What Is an Assange? Wikileaks : We have changed our Twitter icon to represent the censorship shadow... ‘Linken van radiostreams verboden’ Buma maakt einde aan gratis linken naar streams. Nieuws - De Nederlandse rechtbank oordeelt dat radioportal Nederland.fm illegaal muziek doorgeeft waar radiozenders licentiegeld voor afdragen aan auteursrechtenorganisatie Buma/Stemra. 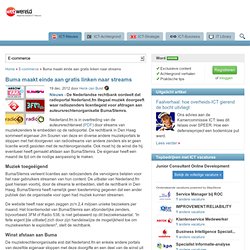 Copyright monopolists insist on the idea of controlling the fruits of other people's labor, such as when other people copy a particular file. This attitude is offensive, insulting, and antithetical to a free market.