Want to Know What Facebook Really Thinks of Journalists? Here's What Happened When It Hired Some. » Nostalgia and Newspapers Clay Shirky. Aaron Kushner, CEO of Freedom Communications and the architect of a contrarian plan to expand southern California newspapers, began erecting hard paywalls for his digital properties while increasing newsroom and print outlay in the summer of 2012. 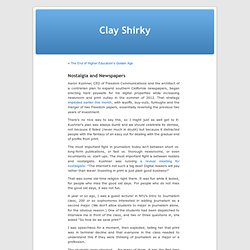 That strategy imploded earlier this month, with layoffs, buy-outs, furloughs and the merger of two Freedom papers, essentially reversing the previous two years of investment. There’s no nice way to say this, so I might just as well get to it: Kushner’s plan was always dumb and we should celebrate its demise, not because it failed (never much in doubt) but because it distracted people with the fantasy of an easy out for dealing with the gradual end of profits from print. The most important fight in journalism today isn’t between short vs. long-form publications, or fast vs. thorough newsrooms, or even incumbents vs. start-ups.

Essay: Hey, Publishers: Stop fooling us, and yourselves. For an industry built on a foundation of truth-telling, the newspaper business sure has trouble telling the truth about itself. 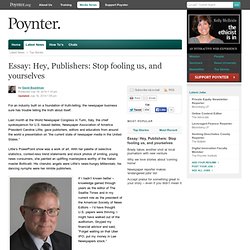 Last month at the World Newspaper Congress in Turin, Italy, the chief spokesperson for U.S. -based dailies, Newspaper Association of America President Caroline Little, gave publishers, editors and educators from around the world a presentation on “the current state of newspaper media in the United States.” Little’s PowerPoint show was a work of art. 33 verdienmodellen in de journalistiek. 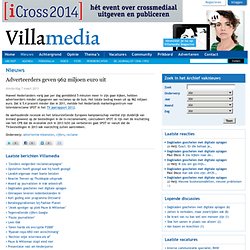 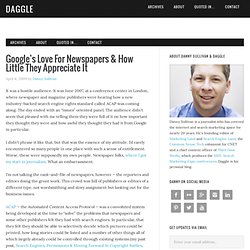 It was June 2007, at a conference center in London, where newspaper and magazine publishers were hearing how a new industry-backed search engine rights standard called ACAP was coming along. The day ended with an “issues” oriented panel. Google CEO Eric Schmidt On Newspapers & Journalism. Is Google a newspaper killer? 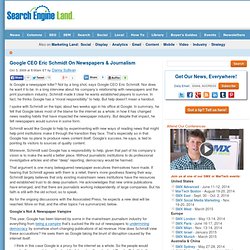 Not by a long shot, says Google CEO Eric Schmidt. Nor does he want it to be. In a long interview about his company’s relationship with newspapers and the print journalism industry, Schmidt made it clear he wants established players to survive. Garlic For The Google Vampire. Wall Street Journal publisher Les Hinton has called Google a “vampire” that has a taste for sucking the blood out of newspapers. 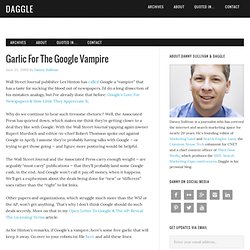 Federal Funds Called Vital for Many Public Stations. When Congress approved a $445 million advance appropriation for the Corporation for Public Broadcasting in December, the corporation, which administers funds given to public broadcasters, was directed to investigate an important question: Could public television and radio survive without federal funds? 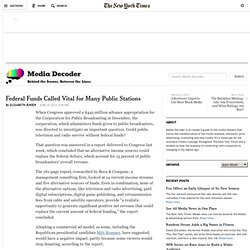 That question was answered in a report delivered to Congress last week, which concluded that no alternative income sources could replace the federal dollars, which account for 15 percent of public broadcasters’ overall revenue. The 181-page report, researched by Booz & Company, a management consulting firm, looked at 14 current income streams and five alternative sources of funds. Adopting a commercial ad model, as some, including the Republican presidential candidate Mitt Romney, have suggested, would have a negative impact, partly because some viewers would stop donating, according to the report.

Mr. How to make your journalism project succeed on Kickstarter. There were lots of little cupcakes and big hugs in the wake of Kickstarter success for Laura and Chris Amico, who last month surpassed their $40,000 fundraising goal to keep Homicide Watch D.C. running. 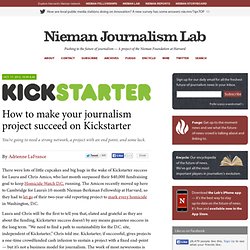 The Amicos recently moved up here to Cambridge for Laura’s 10-month Nieman-Berkman Fellowship at Harvard, so they had to let go of their two-year-old reporting project to mark every homicide in Washington, D.C. Laura and Chris will be the first to tell you that, elated and grateful as they are about the funding, Kickstarter success doesn’t by any means guarantee success in the long term. Meet Matter, a New Accelerator for Media Startups. If you think traditional media outlets are disconnected from the startup world, think again. 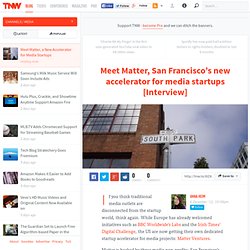 While Europe has already welcomed initiatives such as BBC Worldwide’s Labs and the Irish Times’ Digital Challenge, the US are now getting their own dedicated startup accelerator for media projects: Matter Ventures. Matter is backed by three media non-profits: San Francisco’s KQED and the Knight Foundation, which have each invested $1.25 million in the initial $2.5 million fund in exchange for an equity stake in participating startups, and Public Radio Exchange (PRX), which will provide strategic and management support. Matter. Freelance journalisten aan het roer van een mediabedrijf - ThePostOnline. 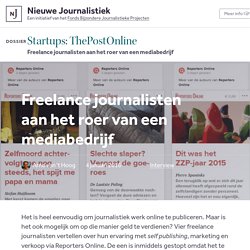