The Impact of Chocolate on the Environment. The Victims. It is essential to remember that vulnerability to human trafficking is far-reaching, spanning multiple different areas such as age, socio-economic status, nationality, education-level, or gender. 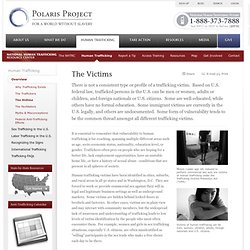 Traffickers often prey on people who are hoping for a better life, lack employment opportunities, have an unstable home life, or have a history of sexual abuse - conditions that are present in all spheres of society. Human trafficking victims have been identified in cities, suburbs, and rural areas in all 50 states and in Washington, D.C. They are forced to work or provide commercial sex against their will in legal and legitimate business settings as well as underground markets. Some victims are hidden behind locked doors in brothels and factories. In other cases, victims are in plain view and may interact with community members, but the widespread lack of awareness and understanding of trafficking leads to low levels of victim identification by the people who most often encounter them. Premium Chocolate Holds Steady in Tough Economy.

Economics- The Story of Chocolate. Around the world, 5 million to 6 million cocoa farmers—and 40 million to 50 million people total—depend on cocoa for their livelihood. 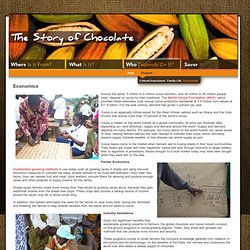 The World Cocoa Foundation (WCF), which provided these estimates, puts annual cocoa production worldwide at 3.8 million tons valued at $11.8 billion. For the past century, demand has grown 3 percent per year. Cocoa is an especially critical export for the West African nations such as Ghana and the Cote d'Ivoire that source more than 70 percent of the world’s cocoa. Cocoa is traded on the world market as a global commodity. Its price can fluctuate daily, depending on—and affecting—supply and demand around the world.

Cocoa beans come to the market when farmers sell to buying sheds in their local communities. Chocolate's bittersweet economy - Feb. 14, 2008. (Fortune) -- Outside the village of Sinikosson in southwestern Ivory Coast, along a trail tracing the edge of a muddy fishpond, Madi Ouedraogo sits on the ground picking up cocoa pods in one hand, hacking them open with a machete in the other and scooping the filmy white beans into plastic buckets. 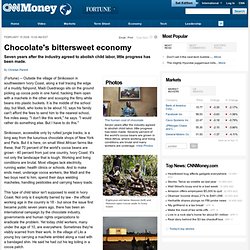 It is the middle of the school day, but Madi, who looks to be about 10, says his family can't afford the fees to send him to the nearest school, five miles away. "I don't like this work," he says. "I would rather do something else. But I have to do this. " Ingredients- The Story of Chocolate. Pluses, minuses come wrapped in chocolate. Q. 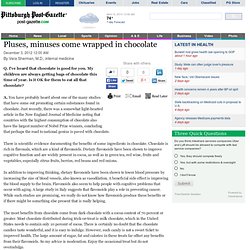 Making the World Better Through Chocolate. Organic chocolate may not keep the weight off but it is more eco-friendly than the typical bonbon Studies show that chocolate—at least dark chocolate when eaten in moderation—is good for you. 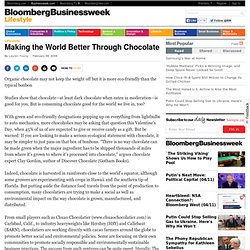 But is consuming chocolate good for the world we live in, too? With green and eco-friendly designations popping up on everything from lightbulbs to auto mechanics, more chocoholics may be asking that question this Valentine's Day, when 45% of us of are expected to give or receive candy as a gift. But be warned: If you are looking to make a serious ecological statement with chocolate, it may be simpler to just pass on that box of bonbons. Chocolate. Chocolate After fermentation, the beans are dried, cleaned, and roasted. 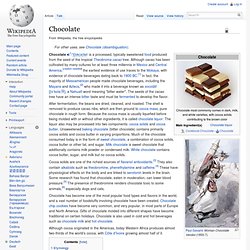 The shell is removed to produce cacao nibs, which are then ground to cocoa mass, pure chocolate in rough form. Because the cocoa mass is usually liquefied before being molded with or without other ingredients, it is called chocolate liquor. The liquor also may be processed into two components: cocoa solids and cocoa butter. Unsweetened baking chocolate (bitter chocolate) contains primarily cocoa solids and cocoa butter in varying proportions. Cocoa solids are one of the richest sources of flavanol antioxidants.[3] They also contain alkaloids such as theobromine, phenethylamine and caffeine.[4] These have physiological effects on the body and are linked to serotonin levels in the brain. Health effects of chocolate. The health effects of chocolate refer to the possible beneficial or detrimental physiological effects of eating chocolate mainly for pleasure. 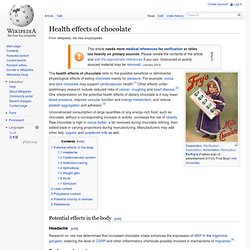 For example, cocoa and dark chocolate may support cardiovascular health.[1] Other effects under preliminary research include reduced risks of cancer, coughing and heart disease.[2] One interpretation on the potential health effects of dietary chocolate is it may lower blood pressure, improve vascular function and energy metabolism, and reduce platelet aggregation and adhesion.[3] Unconstrained consumption of large quantities of any energy-rich food, such as chocolate, without a corresponding increase in activity, increases the risk of obesity. Raw chocolate is high in cocoa butter, a fat removed during chocolate refining, then added back in varying proportions during manufacturing. Manufacturers may add other fats, sugars, and powdered milk as well. Potential effects in the body[edit] Headache[edit] Cardiovascular system[edit] Addiction/craving[edit]

Bad Effects of Chocolate. The Disadvantages Of Eating Chocolate. Although chocolate's sweet, pleasant taste may put a smile on your face, there are some disadvantages associated with eating this rich food. 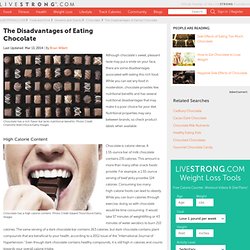 While you can eat any food in moderation, chocolate provides few nutritional benefits and has several nutritional disadvantages that may make it a poor choice for your diet. Nutritional properties may vary between brands, so check product labels when available. Chocolate is calorie-dense. A 1.55-ounce bar of milk chocolate contains 235 calories. This amount is more than many other snack foods provide. Negative Side Effects of Chocolate « phillipmintonmd. Chocolate is getting a lot of good press these days. 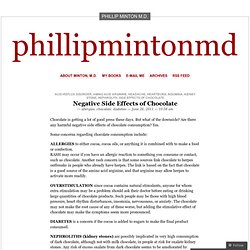 But what of the downside? Are there any harmful negative side effects of chocolate consumption? Yes. Some concerns regarding chocolate consumption include: ALLERGIES to either cocoa, cocoa oils, or anything it is combined with to make a food or confection. OVERSTIMULATION since cocoa contains natural stimulants, anyone for whom extra stimulation may be a problem should ask their doctor before eating or drinking large quantities of chocolate products. DIABETES is a concern if the cocoa is added to sugars to make the final product consumed. Chocolate's Dark Secret. From religious elixir to lover's treat to health food? 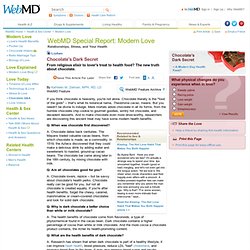 The new truth about chocolate. Why do I need to register or sign in for WebMD to save? We will provide you with a dropdown of all your saved articles when you are registered and signed in. What Are the Effects of Chocolate? What Are The Side Effects Of Chocolate? Sweet Science: The Health Benefits of Chocolate. Yet another health benefit has been linked to eating chocolate: It may decrease your risk of stroke, a new study suggests.

The analysis, which will be presented in April at the American Academy of Neurology's 62nd Annual Meeting, reviewed the results of three previous studies. One study with more than 44,000 participants found that those who ate a weekly serving of chocolate were 22 percent less likely to suffer a stroke than those who ate no chocolate. The researchers caution however, that more studies are needed to confirm the link, and other factors besides chocolate consumption could be contributing to the decreased stroke risk. Good and Bad effects of Chocolate. Date: 29 November 2011 Authors: Warada Jaewjira Witchayaporn Thawornwasu (retrieved at 25 November 2011) Chocolate is the most famous sweet desserts which that everybody liked.

Chemicals in Chocolate and their Impact on the Brain. Eating chocolate makes us feel good. But why exactly? Is it the taste? Chocolate on the Brain. Biology 2022004 First Web PaperOn Serendip Kristen Coveleskie While thinking of things to put in a gift basket for a friend who was in the hospital, my roommate turned to me with some of her German chocolates and inquired if indeed it was true that chocolate makes a person happy. "It has something to do with endorphins in the brain, right? " she asked me. I decided to do some research. Chocolate can affect the brain by causing the release of certain neurotransmitters. It turns out that my roommate was correct in her assertion that chocolate affects the levels of endorphins in the brain. Eat Chocolate, It's Good For You. There is no need to feel guilty about eating chocolate on Valentine's Day or any other day.

Several studies suggest that chocolate can actually be good for you and your heart. Ingredients. Chocolate: Good for the Mind, Body & Spirit. Kirsti A. Home-Chocolate Poisoning In Animals.