Is Halifax transforming into one of the UK’s upcoming towns? - Places - Yorkshire Life. Milton Keynes: The middle-aged new town. Interactive The sign to Milton Keynes Most towns grow and evolve over hundreds if not thousands of years. 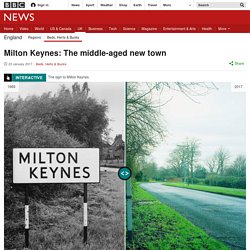 Not so Milton Keynes, which is 50 years old. Perhaps the best known of the 20th Century "new towns", it has its detractors but is also much loved by its residents. English patriotism on the rise, research shows. English patriotism is on the rise at the expense of a sense of British identity, with voters in England increasingly likely to describe themselves as solely English, according to research. 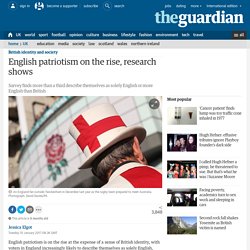 The studyfound that almost a fifth of people describe themselves as English not British, up 5% from 2015, with more than a third of those surveyed describing themselves as either solely English or more English than British. The YouGov data showed that the number of people who described themselves solely as British fell in 2016 from a year earlier. Last year just 18% of those surveyed said they felt only British or more British than English. Regionalism needed to bridge north-south divide. Gordon Brown calls for a people’s convention to brainstorm ways of reducing the growing economic gap between the south-east and the rest of Britain (Any Brexit deal must seek to mend the north-south divide, 9 November). 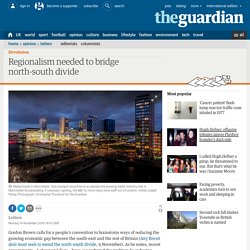 As he notes, recent governments – Labour and Tory – have exacerbated the problem by reducing regional aid and skewing both transport and R&D investment toward the south. However well northern schools and universities perform, the productivity and skills gap will persist in northern cities due to the brain drain of skilled workers to better-paid jobs, usually service not manufacturing, in southern England.

The pro-Trump US rustbelt, and much of southern and eastern Europe, face similarly intractable brain drains. Breaking the vicious circle will require, as well as devolving power to cities and regions, better focused central government intervention. • Gordon Brown says that “Britain now has the most extreme inter-regional inequalities of any country in western Europe”. The Guardian view on English local identities: a clash of cash against community. Is Derbyshire in the north of England or the Midlands? 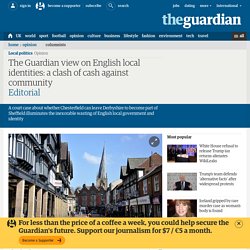 The question is as old as the redrawing of the map of England following the Norman conquest. But it is no longer such a parochial or academic question as it may seem. Derbyshire’s dilemmas now illuminate what we mean by local democracy and local government in England more generally. That’s because the promotion of English city regions and the money being directed towards the northern powerhouse by the Treasury in London are making a nonsense of historic local identities as well as of England’s long but increasingly derelict traditions of locally rooted democratic municipalism.

The court did this after Derbyshire complained that if Chesterfield were permitted to redefine itself as part of Sheffield, it would raise the question of whether the county of Derbyshire could be said to exist at all without its second largest town. Medieval county boundaries are one thing, economic geography another. As chief executive of Barnsley council up to 2012 I was party to the early, difficult discussions about the formation of the Sheffield city region; difficult because Derbyshire county council (and, similarly, Nottinghamshire county council) refused to engage in a sensible discussion about adapting institutional arrangements to reflect the reality of the economic geography of the sub-region. 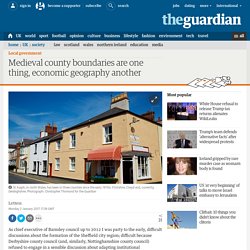 Economic data shows that Chesterfield is indeed part of the Sheffield city region economic area. The economic centre of gravity of Derbyshire itself lies to the south, in Derby’s relationship with Nottingham and Leicester. Your editorial (Derbyshire’s dilemma pits cash against identity and democracy, 29 December) is wrong to say this argument is about council cuts and local councils “clutching at any cash straws they can”.

Rather, it is about Chesterfield having the freedom to take its own decisions on its economic future, free from the dominion traditionally exercised by the county council.