(BONUS VIDEO) How Safe Are Pesticides, Really? #1 Get the 101 on Pesticides, Insecticides, Fertilizer, Herbicides, and More - Food Dialogues. Pesticide What is a Pesticide? 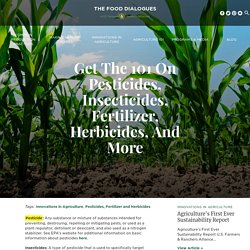 According to the Environmental Protection Agency (EPA), the government body that regulates pesticides in the U.S., a pesticide is any substance or mixture of substances intended for preventing, destroying, repelling or mitigating any pest. #2 What is Glyphosate? - Food Dialogues. Glyphosate What is Glyphosate? 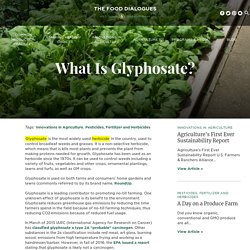 According to the National Pesticide Information Center, Glyphosate is an herbicide. It is applied to the leaves of plants to kill both broadleaf plants and grasses. The sodium salt form of glyphosate is used to regulate plant growth and ripen fruit. Glyphosate was first registered for use in the U.S. in 1974. Is the most widely used herbicide What is an Herbicide? Herbicide(s), also commonly known as weedkillers, are chemical substances used to control unwanted plants.[1] Selective herbicides control specific weed species, while leaving the desired crop relatively unharmed, while non-selective herbicides (sometimes called "total weedkillers" in commercial products) can be used to clear waste ground, industrial and construction sites, railways and railway embankments as they kill all plant material with which they come into contact. in the country, used to control broadleaf weeds and grasses.

Glyphosate is a leading contributor to promoting no-till farming. #3 How to limit the need for pesticides. Pesticides are designed to kill particular classes of organisms. 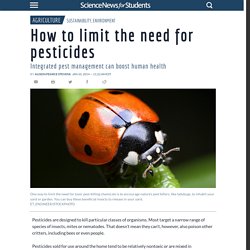 Most target a narrow range of species of insects, mites or nematodes. That doesn’t mean they can’t, however, also poison other critters, including bees or even people. Pesticides sold for use around the home tend to be relatively nontoxic or are mixed in concentrations that are not overly strong. They should be relatively safe around people, at least when used as directed. But kids are smaller than adults. That presents a concern, because kids are exposed to a wide variety of pesticides every day, the AAP finds. That’s why the AAP recommends taking steps to reduce pesticide exposure. For instance, gardeners or farmers may release ladybugs or other natural predators onto their plants. Recently, some crop scientists have found that certain species of plants naturally produce vapors that act as chemical distress calls. People also can choose certain species of crops or garden plants whose roots exude their own weed killers.

#4 Sustainable agriculture: With or without pesticides? - Debating Europe. #4 Herbicide. A herbicide is a pesticide used to kill unwanted plants. 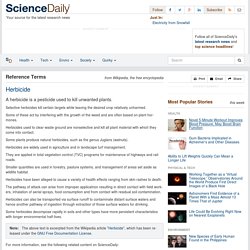 Selective herbicides kill certain targets while leaving the desired crop relatively unharmed. Some of these act by interfering with the growth of the weed and are often based on plant hormones. Herbicides used to clear waste ground are nonselective and kill all plant material with which they come into contact. Some plants produce natural herbicides, such as the genus Juglans (walnuts). Herbicides are widely used in agriculture and in landscape turf management. They are applied in total vegetation control (TVC) programs for maintenance of highways and railroads. Smaller quantities are used in forestry, pasture systems, and management of areas set aside as wildlife habitat. Herbicides have been alleged to cause a variety of health effects ranging from skin rashes to death. Some herbicides decompose rapidly in soils and other types have more persistent characteristics with longer environmental half-lives. 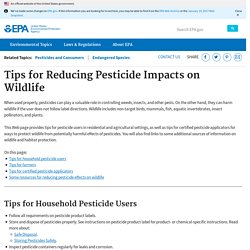 On the other hand, they can harm wildlife if the user does not follow label directions. Pest Control and Pesticide Safety for Consumers. On this page: What is IPM? 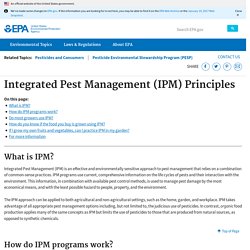 Integrated Pest Management (IPM) is an effective and environmentally sensitive approach to pest management that relies on a combination of common-sense practices. IPM programs use current, comprehensive information on the life cycles of pests and their interaction with the environment. #8 tenwaystoprotectbeesfrompesticides. #9 Three Ways Farmers Get Rid of Pests on the Farm. A farmer may choose any one, or a combination of these methods for dealing with threats to their crop: 1. 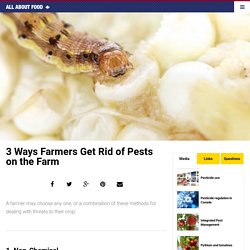 Non-Chemical Crop rotation (changing the crops grown every year). This helps to prevent pests which may target one particular crop. #10 The Dangers of Pesticides. One of my favorite foods in the world has to be a freshly picked apple. 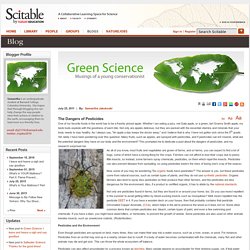 Whether I am eating a juicy, red Gala apple, or a green, tart Granny Smith apple, my taste buds explode with the goodness of each bite. Not only are apples delicious, but they are packed with the essential vitamins and minerals that your body needs to stay healthy. As I always say, "An apple a day keeps the doctor away," and I believe that is why I have not gotten sick since the 5th grade. Yet, lately I have been pondering over this question: Many fruits, such as apples, are sprayed with pesticides, and if pesticides can kill insects, what are the potential dangers they have on our body and the environment? This prompted me to dedicate a post about the dangers of pesticides, and my research surprised me.