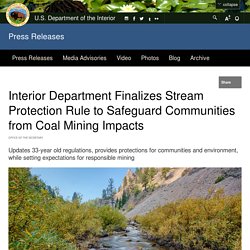 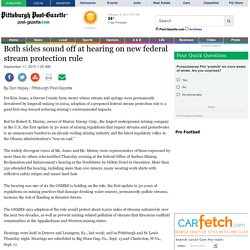 But for Robert E. Murray, owner of Murray Energy Corp., the largest underground mining company in the U.S., the first update in 30 years of mining regulations that impact streams and groundwater is an unnecessary burden to an already reeling mining industry and the latest regulatory volley in the Obama administration’s “war on coal.” The widely divergent views of Ms. Jones and Mr. Murray were representative of those expressed by more than 60 others who testified Thursday evening at the federal Office of Surface Mining Reclamation and Enforcement’s hearing at the Doubletree by Hilton Hotel in Greentree. 2016 - National Mining Association Fact Sheet - SPR. 2016 - SPR Myths and Facts - Office of Surface Mining Reclamation and Enforcement. 2016 - Crow Tribe Concerns.

Saying they weren’t meaningfully consulted, Crow tribal officials are asking the federal government not to publish a new stream protection rule that could hamper coal mining in southeast Montana. 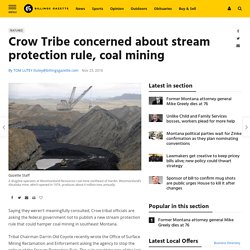 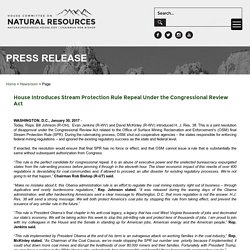 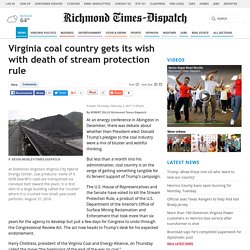 But less than a month into his administration, coal country is on the verge of getting something tangible for its fervent support of Trump’s campaign. An online service is needed to view this article in its entirety. 2017 - Coal Country Reacts to Stream Protection Rule. A federal rule announced this week is designed to reduce the environmental impact of coal mining. 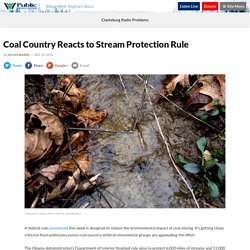 It’s getting sharp criticism from politicians across coal country, while environmental groups are applauding the effort. The Obama Administration’s Department of Interior finalized rule aims to protect 6,000 miles of streams and 52,000 acres of forests - mostly affecting Kentucky, West Virginia, Ohio, and Pennsylvania. It maintains a buffer zone rule that blocks mining within 100 feet of streams, and imposes stricter policies that require companies to restore land to pre-mining conditions.

West Virginia’s Senator Joe Manchin issued a statement criticizing Interior’s lack of transparency crafting what he calls a “job-killing regulation” and casting doubt on the science behind it. Senator Shelley Moore Capito calls it a “last-ditch” exercise in futility that will be easily blocked by the incoming Republican majority. 2017 - Americans for Tax Reform letter. 2017 - Public Opinion Polling - Countable. 2017 - Appalachian Voices - Stream Protection Rule. 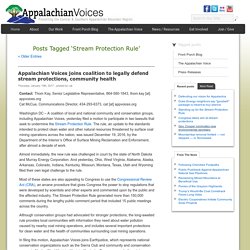 The rule, an update to the standards intended to protect clean water and other natural resources threatened by surface coal mining operations across the nation, was issued December 19, 2016, by the Department of the Interior’s Office of Surface Mining Reclamation and Enforcement, after almost a decade of work. Almost immediately, the new rule was challenged in court by the state of North Dakota and Murray Energy Corporation. And yesterday, Ohio, West Virginia, Alabama, Alaska, Arkansas, Colorado, Indiana, Kentucky, Missouri, Montana, Texas, Utah and Wyoming filed their own legal challenge to the rule. 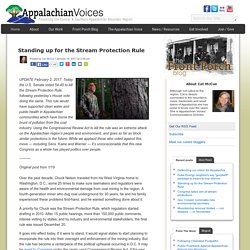 Senate voted 54-45 to kill the Stream Protection Rule, following yesterday’s House vote doing the same. This rule would have supported clean water and public health in Appalachian communities which have borne the brunt of pollution from the coal industry. Using the Congressional Review Act to kill the rule was an extreme attack on the Appalachian region’s people and environment, and goes so far as block similar protections in the future. While we applaud those who voted against this move — including Sens. Kaine and Warner — it’s unconscionable that this new Congress as a whole has played politics over people. 2017 - West Virginia - Stream Protection Rule will be overturned soon. UPDATE (10:20 p.m.) 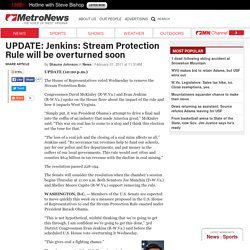 The House of Representatives voted Wednesday to remove the Stream Protection Rule. Congressmen David McKinley (R-W.Va.) and Evan Jenkins (R-W.Va.) spoke on the House floor about the impact of the rule and how it impacts West Virginia. “Simply put, it was President Obama’s attempt to drive a final nail into the coffin of an industry that made America great,” McKinley said. “This war on coal has to come to a stop and I think this election set the tone for that.” “The loss of a coal job and the closing of a coal mine affects us all,” Jenkins said.