A Dream Undone. On the morning of his wedding, in 1956, Henry Frye realized that he had a few hours to spare before the afternoon ceremony. 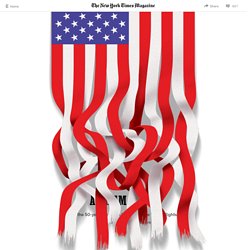 He was staying at his parents’ house in Ellerbe, N.C.; the ceremony would take place 75 miles away, in Greensboro, the hometown of his fiancée; and the drive wouldn’t take long. Frye, who had always been practical, had a practical thought: Now might be a good time to finally register to vote. He was 24 and had just returned from Korea, where he served as an Air Force officer, but he was also a black man in the American South, so he wasn’t entirely surprised when his efforts at the registrar’s office were blocked. The Fight for Voting Rights, 50 Years Later. U.S. Is Suing in Texas Cases Over Voting by Minorities. The Justice Department said it would file paperwork to become a co-plaintiff in an existing lawsuit brought by civil rights groups and Texas lawmakers against a Texas redistricting plan. 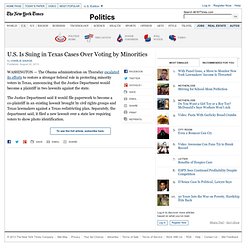 Separately, the department said, it filed a new lawsuit over a state law requiring voters to show photo identification. In both cases, the administration is asking federal judges to rule that Texas has discriminated against voters who are members of a minority group, and to reimpose on Texas a requirement that it seek “pre-clearance” from the federal government before making any changes to election rules.

In June, the Supreme Court removed the requirement by striking down part of the Voting Rights Act. “Today’s action marks another step forward in the Justice Department’s continuing effort to protect the voting rights of all eligible Americans,” Attorney General Eric H. Texas Republicans denounced the move as an intrusion on states’ rights. Gov. Richard L. Republican voter ID initiatives are making it hard to rebrand the GOP as open to black voters. Photo by Chris Keane/Reuters On Monday, North Carolina Gov. 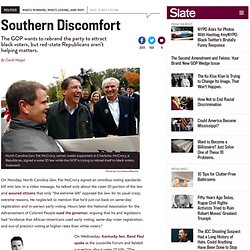 Pat McCrory signed an omnibus voting standards bill into law. In a video message, he talked only about the voter ID portion of the law and assured citizens that only “the extreme left” opposed the law, for its usual crazy, extreme reasons. He neglected to mention that he’d just cut back on same-day registration and in-person early voting. Hours later the National Association for the Advancement of Colored People sued the governor, arguing that he and legislators had “evidence that African-Americans used early voting, same-day voter registration, and out-of precinct voting at higher rates than white voters.”

On Wednesday, Kentucky Sen. While Paul was speaking, the Republican National Committee announced a special 50th-anniversary commemoration of Martin Luther King Jr.’s “I Have a Dream” speech. Nobody said rebranding would be easy, but this is excruciating. North Carolina law takes war on voting rights to a new low. IN THE wake of the Supreme Court’s Shelby v. 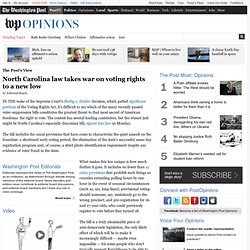 Holder decision, which gutted significant portions of the Voting Rights Act, it’s difficult to say which of the many recently passed voter-suppression bills constitutes the greatest threat to that most sacred of American freedoms: the right to vote. The contest has several leading contenders, but the winner just might be North Carolina’s especially draconian bill, signed into law on Monday. The bill includes the usual provisions that have come to characterize the quiet assault on the franchise: a shortened early-voting period, the elimination of the state’s successful same-day registration program and, of course, a strict photo identification requirement despite any evidence of voter fraud in the state. Washington Post Editorials Editorials represent the views of The Washington Post as an institution, as determined through debate among members of the editorial board.

Reaction and Analysis of Supreme Court Decision on Voting Rights. U.S. Asks Court to Limit Texas on Ballot Rules. In a speech before the National Urban League in Philadelphia, Attorney General Eric H. 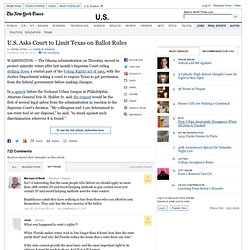 Holder Jr. said the request would be the first of several legal salvos from the administration in reaction to the Supreme Court’s decision. “My colleagues and I are determined to use every tool at our disposal,” he said, “to stand against such discrimination wherever it is found.” Last month’s ruling, Shelby County v. Attorney General Eric Holder Delivers Remarks. Thank you, Marc [Morial], for those kind words – and thank you all for such a warm welcome. 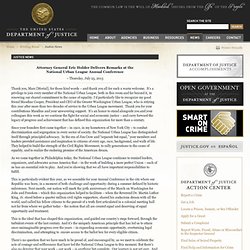 It’s a privilege to join every member of the National Urban League, both in this room and far beyond it, in renewing our shared commitment to the cause of equality. I’d particularly like to recognize my good friend Maudine Cooper, President and CEO of the Greater Washington Urban League, who is retiring this year after more than two decades of service to the Urban League movement. Thank you for your contributions Maudine and your unwavering support.

It’s an honor to stand alongside you and your colleagues this week as we continue the fight for social and economic justice – and carry forward the legacy of progress and achievement that has defined this organization for more than a century. This is the ideal that has shaped this organization, and guided our country’s steps forward, through the turbulent events of the last century. After all, this has never been a partisan issue. Thank you. 42 USC § 1973a - Proceeding to enforce the right to vote. Civil Rights Division Home Page. CBC seeks improvements to voting law. Members of the Congressional Black Caucus (CBC) are seeking to strengthen the Voting Rights Act by making it easier for judges to expand voter protections across the country in response to individual discrimination lawsuits. 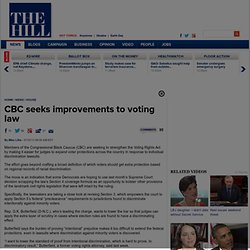 The effort goes beyond crafting a broad definition of which voters should get extra protection based on regional records of racial discrimination. The move is an indication that some Democrats are hoping to use last month’s Supreme Court decision scrapping the law’s Section 4 coverage formula as an opportunity to bolster other provisions of the landmark civil rights legislation that were left intact by the ruling. Specifically, the lawmakers are taking a close look at revising Section 3, which empowers the court to apply Section 5’s federal “preclearance” requirements to jurisdictions found to discriminate intentionally against minority voters. 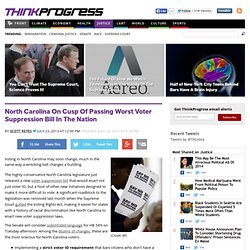 The highly-conservative North Carolina legislature just released a new voter suppression bill that would enact not just voter ID, but a host of other new initiatives designed to make it more difficult to vote. North Carolina Passes the Country's Worst Voter Suppression Law. Share A police officer watches over demonstrators near the state legislature during "Moral Monday" protests at the General Assembly in Raleigh, N.C., Monday, June 24, 2013. 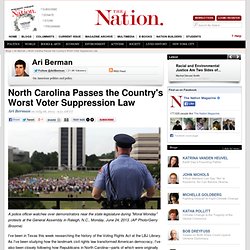