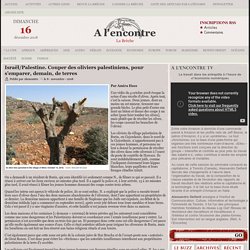 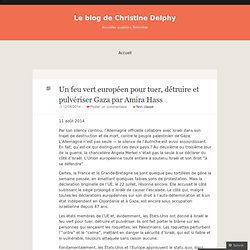 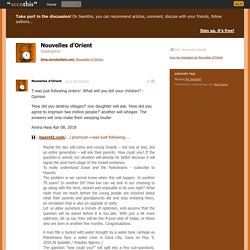 One daughter will ask. ’How did you agree to imprison two million people?’ Another will whisper. The answers will only make their weeping louder Maybe the day will come and young Israelis – not one or two, but an entire generation – will ask their parents: How could you? If the question is asked, our situation will already be better because it will signal the post-herd stage of the Israeli existence.To really understand Israel and the Palestinians - subscribe to HaaretzThe problem is we cannot know when this will happen.

Hebron shooter Elor Azaria is indeed the norm. Over the past year and a half, dozens of Palestinian men, women and children have been killed, even though they could have been overpowered while they were still alive. 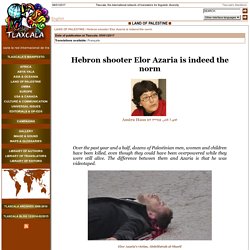 The difference between them and Azaria is that he was videotaped. Elor Azaria's victim, Abdelfattah al-Sharif There’s one thing on which Palestinians agree with Elor Azaria and his supporters: that he wasn’t the only one, he just had the bad luck to be videotaped without his knowledge. Palestinians agree with Azaria and his supporters that he was complying with the norm and did exactly what other soldiers do – namely, shoot with intent to kill even when nobody’s life is in danger.

Palestinians agree with Azaria that the system discriminated against him. Like Azaria himself, Palestinians are wondering why he stood trial while the soldiers who killed Hadeel al-Hashlamoun of Hebron were never even investigated by the Military Police. Carlos Latuff. A Gaza être un tigre est une chance. Right to Resist. This is a rush transcript. 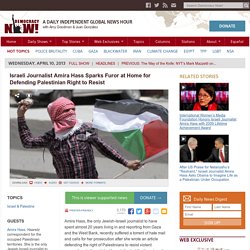 Copy may not be in its final form. AMY GOODMAN: This is Democracy Now! , democracynow.org, The War and Peace Report. I’m Amy Goodman, with Nermeen Shaikh. NERMEEN SHAIKH: We turn now to Israel, where Secretary of State John Kerry has just concluded his third visit to the region in less than three weeks. SECRETARY OF STATE JOHN KERRY: We agreed among us—President Abbas, Prime Minister Netanyahu and ourselves—that we are going to engage in new efforts, very specific efforts, to promote economic development and to remove some of the bottlenecks and barriers that exist with respect to commerce in the West Bank. AMY GOODMAN: On Monday, while Secretary of State Kerry was visiting Israel, Israeli soldiers shot a Palestinian photographer in the face with a rubber-coated metal bullet in the Aida refugee camp in the West Bank city of Bethlehem. Well, to talk more about the situation is the journalist herself.

On Palestinian Resistance. Part two of our interview with Amira Hass, the only Jewish-Israeli journalist to have spent almost 20 years living in and reporting from Gaza and the West Bank. 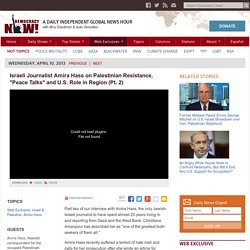 Christiane Amanpour has described her as "one of the greatest truth-seekers of them all. " Amira Hass recently suffered a torrent of hate mail and calls for her prosecution after she wrote an article for Haaretz defending the right of Palestinians to resist violent occupation. In the article, Hass defended the throwing of stones by Palestinian youth at Israeli soldiers, calling it "the birthright and duty of anyone subject to foreign rule.

" In this web exclusive, Hass begins by reading her controversial article. Watch Part One of Amira Hass Interview Watch 2009 Interview AMY GOODMAN: This is Democracy Now! CHRISTIANE AMANPOUR: Amira monitors power by following the lives of average people caught in its machinations, and she’s on the ground listening and collecting their testimonies. Some call her a traitor. Israel’s moral defeat will haunt us for years. If victory is measured in the number of dead, then Israel and its army are big winners. 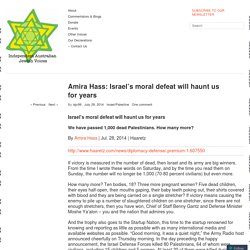 From the time I wrote these words on Saturday, and by the time you read them on Sunday, the number will no longer be 1,000 (70-80 percent civilians) but even more. How many more? Ten bodies, 18? Three more pregnant women? Five dead children, their eyes half-open, their mouths gaping, their baby teeth poking out, their shirts covered with blood and they are being carried on a single stretcher? And the trophy also goes to the Startup Nation, this time to the startup renowned for knowing and reporting as little as possible with as many international media and available websites as possible.