Home - CB Cares. The Center for Alcohol and Drug Resources : Programs : Community : Bergen County Prevention Coalition. In August, 2010, the BCPC was created to bring together individuals and organizations that are committed to, and passionate about, reducing the prevalent rates of alcohol and drug use among youth and young adults in Bergen County and preventing the problems that often result. 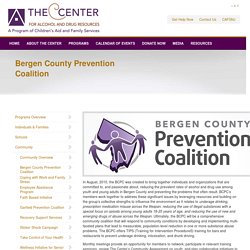 BCPC’s members work together to address these significant issues by leveraging resources and building on the group’s collective strengths to influence the environment as it relates to underage drinking, prescription medication misuse across the lifespan, reducing the use of illegal substances with a special focus on opioids among young adults 18-25 years of age, and reducing the use of new and emerging drugs of abuse across the lifespan. Ultimately, the BCPC will be a comprehensive community coalition that will respond to community conditions by developing and implementing multi-faceted plans that lead to measurable, population-level reduction in one or more substance abuse problems.

Prevention Coalition. Strong Through Our Plan (The STOP Coalition) was begun in the early 1990s by a group of citizens concerned about the growing problem of substance abuse in Southern West Virginia. 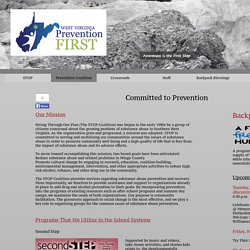 As the organization grew and progressed, a mission was adopted: STOP is committed to serving and mobilizing our communities around the issues of substance abuse in order to promote community well being and a high quality of life that is free from the impact of substance abuse and its adverse effects. To move toward accomplishing this mission, two broad goals have been articulated: Reduce substance abuse and related problems in Mingo County. Promote cultural change by engaging in research, education, coalition building, environmental management, intervention, and other appropriate activities to reduce high risk alcohol, tobacco, and other drug use in the community. 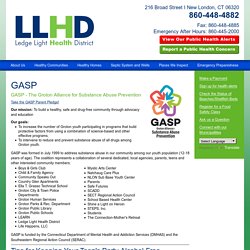 Our mission: To build a healthy, safe and drug-free community through advocacy and education Our goals: To increase the number of Groton youth participating in programs that build protective factors from using a combination of science-based and other effective programs.To intervene to reduce and prevent substance abuse of all drugs among Groton youth. GASP was formed in July 1999 to address substance abuse in our community among our youth population (12-18 years of age). GASP is funded by the Connecticut Department of Mental Health and Addiction Services (DMHAS) and the Southeastern Regional Action Council (SERAC). Work with your teen on a guest list ahead of time and set a limit on the number of attendees.Ask teens to leave purses or backpacks in locked cars or at the front door. For more information, visit bethewall.org Helpful Resources. Ledge Light Health District - Ledyard Prevention Coalition.

Www.ledyardpreventioncoalition.org The Ledge Light Health District was awarded a three year grant from the Department of Mental Health and Addiction Services (DMHAS) to implement an underage drinking prevention initiative in Ledyard. 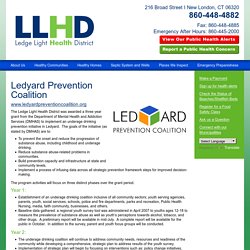 The goals of the initiative (as stated by DMHAS) are to: To prevent the onset and reduce the progression of substance abuse, including childhood and underage drinking.Reduce substance abuse-related problems in communities.Build prevention capacity and infrastructure at state and community levels.Implement a process of infusing data across all strategic prevention framework steps for improved decision-making.

The program activities will focus on three distinct phases over the grant period. Year 1: Year 2: Year 3: Implementation of interventions will continue.Interventions will be monitored, evaluated, sustained, and improved. Northern Berkshire Community Coalition. Nb21 Strategy Work Group: Our nb21 work group invites participation from representatives in all towns across north Berkshire to implement strategy to prevent underage drinking and marijuana use. 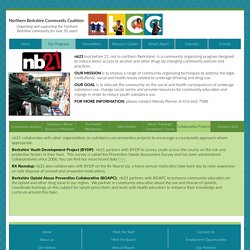 Through media based strategies, and collaborations with parents, schools, pediatricians, and youth workers the entire community can work to reduce substance use by youth. Stop! In the Name of Health: nb21 has joined with Mass in Motion to host a monthly prevention show. Topics range from substance use prevention to active living, healthy eating, oral hygiene and more! Watch our show on Northern Berkshire Community Television! Rx Roundups: Two-thirds of teens that report abusing prescription medicine admit to getting them from friends, family and acquaintances. nb21 partners with area agencies to make it easy to dispose of old or unwanted medications, helping to get them disposed of safely.

A follow up work group was formed and meets once a month. Center for Community Health Improvement. Revere CARES. The Revere CARES Coalition strengthens the health of Revere by: Addressing priorities established by community members; utilizing an environmental approach; advocating for evidence-based, culturally competent strategies, programs and services; and increasing connectedness among individuals and organizations. 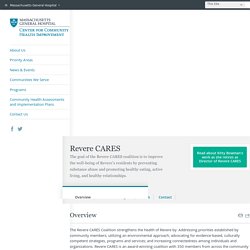 Revere CARES is an award-winning coalition with 350 members from across the community dedicated to preventing alcohol and drug abuse among Revere youth. Coalition members represent a variety of sectors, including parents, youth, government officials, educators, health professionals, first responders and law enforcement. The Coalition oversees three major initiatives: the Alcohol, Tobacco, and other Drugs (ATOD), the Revere on the Move and the Healthy Relationships. Substance Use Disorder Prevention Revere CARES’ substance abuse prevention efforts engage the community in a variety of ways. Healthy Eating/Active Living Healthy Relationship Initiative.

Above the Influence. Home. Housing and Homeless Resources.