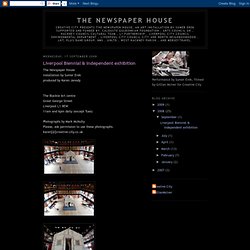 It was first created in London’s Gillett Square in March 2008, transforming over 85,000 used newspapers into a thought provoking artwork, attracting a wide range of people and press coverage internationally. The nature of the project is participatory. The action of rolling the newspaper returns it to an almost natural state, close its natural origin. First Erek builds a shell-like structure. Inside the Newspaper House. To appreciate the complexity of this installation, one needs to understand the notion of 'house', which recurs in Erek's works. /// Recent press :: 100% Paper Home: Inflammable Interior & Furniture Design. Imagine stepping into a real life Alice in Wonderland world, or walking inside the movie Waking Life. 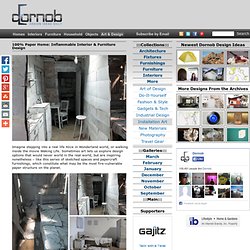 Sometimes art lets us explore design options that would never world in the real world, but are inspiring nonetheless – like this series of sketched spaces and papercraft furnishings, which constitute what may be the most fire-vulnerable paper structure on the planet. From kitchen appliances to bathroom fixtures, built-in cupboards to free-standing cabinets, every interior object was constructed by artist Luise Valdez as a combination of quick-sketch black marker and rough-cut white cardboard (including some pieces of recycled pizza boxes). As for electricity, plumbing and other such amenities … well, you will just have to suspend your disbelief for a bit inside this space. Cooking implements and eating utensils are simply flat cut-outs while sinks, shelves and other three-dimensional kitchen elements are built to hold up the smaller pieces. Constructing Cardboard Geodesic Domes. This site was designed in response to people asking us how we made our domes and who were interested in making their own. 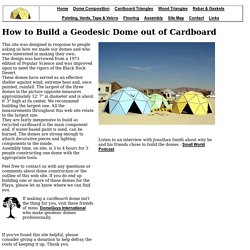 The design was borrowed from a 1973 edition of Popular Science and was improved upon to meet the rigors of the Black Rock Desert. These domes have served as an effective shelter against wind, extreme heat and, once painted, rainfall. The largest of the three domes in the picture opposite measures approximately 12' 7" in diameter and is about 6' 3" high at its center. We recommend building the largest one. All the measurements throughout this web site relate to the largest size. Feel free to contact us with any questions or comments about dome construction or the outline of this web site.

Building Composite Structures with Cardboard. Or... 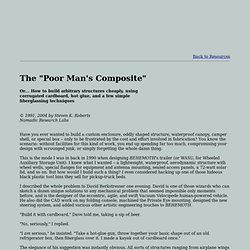 How to build arbitrary structures cheaply, using corrugated cardboard, hot glue, and a few simple fiberglassing techniques © 1991, 2004 by Steven K. Cardboard Real Cathedral / Rebuild - ChristChurch Cathedral. Liam Hopkins: Pupa Cardboard Habitat. Nov 09, 2011 liam hopkins: pupa cardboard habitat for bloomberg ‘pupa’ by liam hopkins for bloomberg all images courtesy of liam hopkins manchester-born liam hopkins of lazerian design studio has developed ‘pupa’, a habitat inside bloomberg’s london office. the project is part of ‘waste not, want it‘, a series of commissions by design agency arts co for pieces of work made almost entirely out of bloomberg waste. hopkins was one of seven creatives asked to use materials found in a storage warehouse and redevelop them into installations. the inhabitable sculpture is fashioned out of 3,972 cardboard boarders to make up the frame, while just as many triangles are used for the exoskeleton. to get the desired form, the shape was computer generated, then extracted from the virtual model to make flat parts. the end structure is glued together entirely by hand. 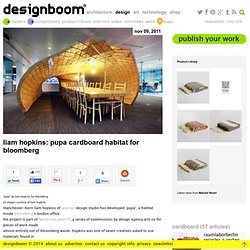 Exterior view. Portable Pop-Up Office: All-in-One Cardboard Furniture Set « Dornob. Beautiful Examples Of Cardboard Architecture : Ecofriend. We all know (or at least should know) about of the subtle impact of Japanese tea ceremonies on the Japanese culture, and clearly alluding to this great tradition, eminent architect Shigeru Ban has contrived the Paper Tea House along with its furniture, composed entirely from recycled cardboard rectangular tubes. 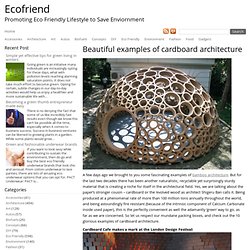 The spatial element also incorporates a main room and a waiting area (with a customary bench). What better way to market sustainable products than showcasing them in a sustainable environment? And that is exactly what designer Pedro Campos Costa has come up with in his interesting conception called the LOW, which is a combination of a store (used only for sale of recycled products) and a bar. The store shelf and furniture is wholly made up from paperboard without any gluing.

Cardboard Columns With 16 Million Facets. When people mistake photographs of your physical prototypes for computer renderings, you know you've achieved something amazing. 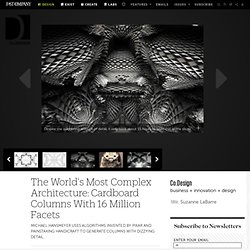 That's exactly what happened when Michael Hansmeyer showed off his "computational architecture" column, created by iterating a subdivision algorithm over and over again and then fabricating it out of cardboard. Hansmeyer's column stands nine feet tall, weighs about 2000 pounds, and is made out of 2700 1mm-thin slices of cardboard stacked on top of wooden cores. It contains somewhere between 8 and 16 million polygonal faces -- too complex for even a 3D printer to handle, according to Hansmeyer.

"Every 3D printing facility we spoke to turned us down," he tells Co.Design. "Typically those machines can't process more than 500,000 faces -- the computer memory required to process the data grows nonlinearly, and it also gets tripped up on the self-intersecting faces of the column. " Cardboard Columns (French) Heyyyyyyyy ! 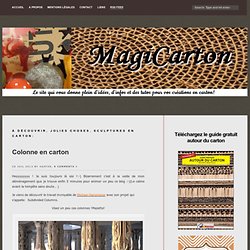