Cannabis hemp dot info episode #2. Best Marijuana Argument Ever: Given By Superior Court Judge James P. Gray. 10 Eye Opening Facts About Hemp. Hemp is always a fun topic to look at because it really makes you ask the obvious question: “Why are we not using this stuff for pretty much EVERYTHING that we do?” 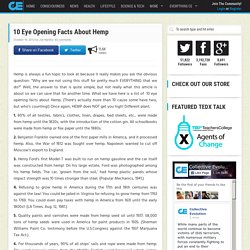 Well, the answer to that is quite simple, but not really what this article is about so we can save that for another time. What we have here is a list of 10 eye opening facts about Hemp. (There’s actually more than 10 cause some have two, but who’s counting!) Once again, HEMP does NOT get you high! Different plant. 1. 80% of all textiles, fabrics, clothes, linen, drapes, bed sheets, etc., were made from hemp until the 1820s, with the introduction of the cotton gin. 2. 3. 4. 5. 6. 7. 8. 9. Understanding the science of cannabis is integral to appropriate regulation and use. (NaturalNews) Cannabis is a plant with demonstrable antioxidant and anti-inflammatory properties, both aspects that point to its potential to be used as an anti-cancer drug. 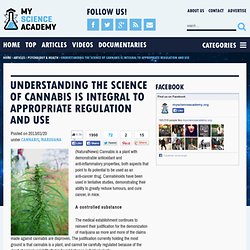 Cannabinoids have been used in tentative studies, demonstrating their ability to greatly reduce tumours, and cure cancer, in mice. A controlled substance The medical establishment continues to reinvent their justification for the demonization of marijuana as more and more of the claims made against cannabis are disproven. The justification currently holding the most ground is that cannabis is a plant, and cannot be carefully regulated because of the great chemical variability that is found between individual plants. Marijuana tied to better blood sugar control.

By Genevra Pittman NEW YORK (Reuters Health) - People who had used marijuana in the past month had smaller waists and lower levels of insulin resistance - a diabetes precursor - than those who never tried the drug, in a new study. 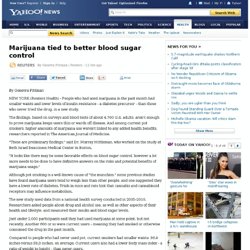 The findings, based on surveys and blood tests of about 4,700 U.S. adults, aren't enough to prove marijuana keeps users thin or wards off disease. And among current pot smokers, higher amounts of marijuana use weren't linked to any added health benefits, researchers reported in The American Journal of Medicine . Alcohol Is More Than Twice As Harmful As Marijuana: Study. ​Alcohol causes far more damage to users and to society than does the use of marijuana, according to a new study published online in the Journal of Psychopharmacology, the journal of the British Association of Psychopharmacology. 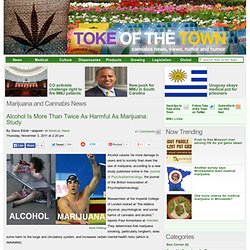 Researchers at the Imperial College of London looked at "the relative physical, psychological, and social harms of cannabis and alcohol," reports Paul Armentano at AlterNet. They determined that marijuana smoking, particularly longterm, does some harm to the lungs and circulatory system, and increases certain mental-health risks (which is debatable). But in contrast, the authors described alcohol as "a toxic substance" responsible for almost five percent "of the total global disease burden. " Hemp. HempCoverups uncovered www.davidicke.net/tellthetruth/coverups/hiddenus1.html The building of early American colonies as well as the American Revolution would not have been possible if it were not for a very special plant. 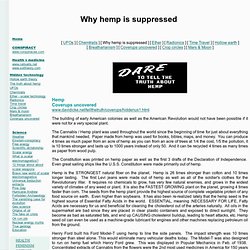 The Cannabis / Hemp plant was used throughout the world since the beginning of time for just about everything that mankind needed. Paper made from hemp was used for books, bibles, maps, and money. Your Brain on Drugs: Marijuana. To Dab Or Not To Dab? With each passing month, the popularity – and controversy – of butane hash oil (BHO) and the phenomenon surrounding it (known as “dabbing”) continues to grow in the cannabis community. 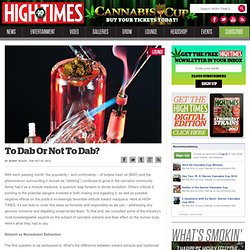 Some hail it as a miracle medicine, a quantum leap forward in stoner evolution. Others criticize it, pointing to the potential dangers involved in both making and ingesting it, as well as possible negative effects on the public’s increasingly favorable attitude toward marijuana. Here at HIGH TIMES, it’s our duty to cover this issue as honestly and responsibly as we can – addressing any genuine concerns and dispelling unwarranted fears.

To that end, we consulted some of the industry’s most knowledgeable experts on the subject of cannabis extracts and their effect on the human body. Still Believe Nature Got It Wrong? Top 10 Health Benefits of Marijuana. There is no plant on Earth more condemned than marijuana. 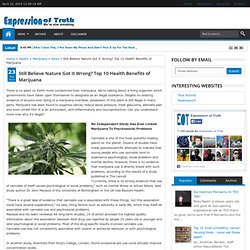 We’re talking about a living organism which governments have taken upon themselves to designate as an illegal substance. Despite no existing evidence of anyone ever dying of a marijuana overdose, possession of this plant is still illegal in many parts. Marijuana has been found to suppress cancer, reduce blood pressure, treat glaucoma, alleviate pain and even inhibit HIV. CHRISTIANS & POT: A HIGH HOLY HISTORY. Story by Chris Bennett In February of 2003, HIGH TIMES published my controversial article, “Was Jesus a Stoner?” 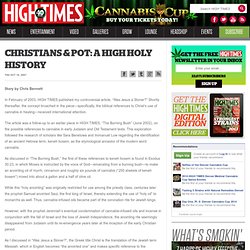 Shortly thereafter, the concept broached in the piece—specifically, the biblical references to Christ’s use of cannabis in healing—received international attention. Long-Term Marijuana Use Could Have Zero Effect on IQ. Teen Marijuana Use Shows No Effect On Brain Tissue, Unlike Alcohol, Study Finds. A teen who consumes alcohol is likely to have reduced brain tissue health, but a teen who uses marijuana is not, according to a new study. 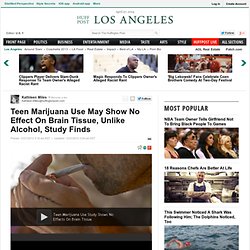 Researchers scanned the brains of 92 adolescents, ages 16 to 20, before and after an 18-month period. During that year and a half, half of the teens -- who already had extensive alcohol and marijuana-use histories -- continued to use marijuana and alcohol in varying amounts. The other half abstained or kept consumption minimal, as they had throughout adolescence. The before-and-after brain scans of the teens consuming typically five or more drinks at least twice a week showed reduced white matter brain tissue health, study co-author Susan Tapert, neuroscientist at University of California, San Diego, told HuffPost. This may mean declines in memory, attention, and decision-making into later adolescence and adulthood, she said. The 10 Smartest Pot Smokers on the Planet… Cool Enough to Admit It « Cafe Vale Tudo. You’ve probably seen those “Above The Influence” anti-drug commercials in which they show worst scenario outcomes to people smoking weed.

Really depressing sh*t. They always make the person out to be an accidental murderer, or homeless, jobless, friendless. #CANNABIS. Marijuana. DRUGS. The Medicines. PERRO SIN PAR. Legalize cannabis. Cannabis. Cannabis. Kaneh Bosm || Cannabis. Cannabis. Cannabis. Hemp: the most versatile plant in the world that is still prohibited from being grown in (most of) America. (NaturalNews) The original drafts of both the Declaration of Independence and the Constitution were written on paper derived from it. 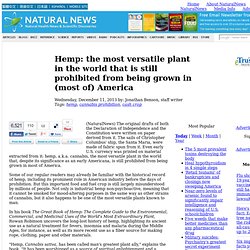 The sails of Christopher Columbus' ship, the Santa Maria, were made of fabric spun from it. Even early U.S. currency was printed on material extracted from it: hemp, a.k.a. cannabis, the most versatile plant in the world that, despite its significance as an early Americana, is still prohibited from being grown in most of America. Hemp / Cannabis. The Science of Cannabis - as an Ally. Marijuana Isn't a Pain Killer—It's a Pain Distracter. Cannabis Legalities. The Real Reason Hemp Is Illegal. The real reason Cannabis has been outlawed has nothing to do with its effects on the mind and body. MARIJUANA is NOT DANGEROUS. Pot is NOT harmful to the human body or mind. Marijuana does NOT pose a threat to the general public. Marijuana is very much a danger to the oil companies, alcohol, tobacco industries and a large number of chemical corporations. Various big businesses, with plenty of dollars and influence, have suppressed the truth from the people.

The True Reason Pot is Illegal. What cannabis actually does to your brain. Like with all herbal remedies, they are just as serious as man-made meds but weed won't put a rational person in a psych ward. Yes, it can. I've seen it happen. There's also this episode of The Nature of Things (a Canadian science documentary program) that talks about it: [www.cbc.ca] [www.cbc.ca]

Thc makes u question gov. WildAlchemist: Marijuana and The Pineal Gland. For those of you who don't know, I have been devoted to finding out more about the universe as a whole as well as the power of the human mind. I don't consider myself part of any specific religion, instead, I take from all religions in order to get a better understanding of what's out there and of what surrounds us. Lately, I've been doing loads of research on the pineal gland. If you haven't heard about it, you may want to read more about it in my article by clicking here. Marijuana and the Mystery of the Dysfunctional Pineal Gland - The Duncan Trussell Family Hour Forum. Why Marijuana Should Be Legalized: An Expert's Perspective. FBI director gets schooled on marijuana legalization.

Connecticut Approves Pot Decriminalization Bill. Record-High 50% of Americans Favor Legalizing Marijuana Use. Dq8bjss84e2ub3uwvjgeaa.gif (282×479) Three out of four doctors would prescribe medical marijuana to patients: Study. Hemp: American History Revisited: The Plant with a Divided History - Robert Deitch. US Supreme Court Rejects Marijuana Reclassification Appeal. The US Supreme Court Monday declined to hear an appeal from medical marijuana advocacy groups who had challenged the DEA's decision to maintain marijuana's status as a Schedule I drug under the Controlled Substances Act, the category reserved for the most dangerous substances. The court denied in summary order a petition for a writ of certiorari from the groups, led by Americans for Safe Access, which had sought Supreme Court review of a DC Circuit Court of Appeals decision upholding the DEA's ruling that a change in marijuana's classification required the Food and Drug Administration's recognition of acceptable medical uses for the drugs.

Cannabis and cancer. Worth Repeating: It’s Official! Cannabinoids Kill All Types of Cancer. Government Confirms And Reports That Marijuana Prevents Or Cures Certain Cancers. In a recent report, the National Cancer Institute (NCI), part of the Federal government’s National Institutes of Health (NIH), stated that marijuana “inhibited the survival of both estrogen receptor–positive and estrogen receptor–negative breast cancer cell lines.” There Is No Mistaking The Evidence; Cannabis Cures Cancer. Cannabis Cures Cancer. Researchers have now found that the compound, called cannabidiol, has the ability to ‘switch off’ the gene responsible for metastasis in an aggressive form of breast cancer.