Petrol firms told to open books, Business, Phnom Penh Post. Cambodia’s petrol retailers have been ordered by the government to hand over import information and financial records in what looks to be the first steps toward installing fuel-price legislation. 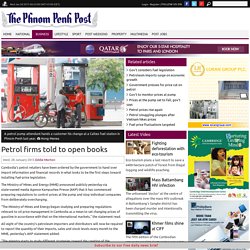 The Ministry of Mines and Energy (MME) announced publicly yesterday via state-owned media Agence Kampuchea Presse (AKP) that it has commenced preparing regulations to control prices at the pump and stop individual companies from deliberately overcharging. “The Ministry of Mines and Energy began studying and preparing regulations relevant to oil price management in Cambodia as a mean to set changing prices of gasoline in accordance with that on the international markets,” the statement read.

All eight of the country’s petroleum importers and distributors will now be required to report the quantity of their imports, sales and stock levels every month to the MME, yesterday’s AKP statement added. Global crude oil prices have declined more than 50 per cent since July last year. Low oil: Winners, losers, Business, Phnom Penh Post. World oil prices hit a five-year low yesterday as crude oil dipped below $53 per barrel. 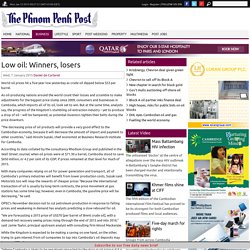 As oil-producing nations around the world count their losses and scramble to make adjustments for the biggest price slump since 2009, consumers and businesses in Cambodia, which imports all of its oil, look set to win. But at the same time, analysts say, the progress of the Kingdom’s stumbling oil-extraction industry – yet to produce a drop of oil – will be hampered, as potential investors tighten their belts during the price downturn. “The decreasing price of oil products will provide a very good effect to the Cambodian economy, because it will decrease the amount of import and payment to other countries,” said Hiroshi Suzuki, chief economist at Business Research Institute for Cambodia. With many companies relying on oil for power generation and transport, all of Cambodia’s primary industries will benefit from lower production costs, Suzuki said. Road and Electricity Infrastructure Work Stimulates Cambodia's Economic Growth. Cross-Border Energy Trade Powers Development in Cambodia.

An improved power supply made it possible to develop a special economic zone in Cambodia's Kampot province, attracting 40 businesses that sustain 10,000 much-needed jobs for the local impoverished community. 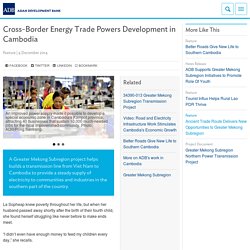 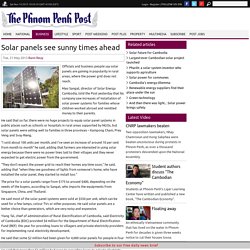 Mao Sangat, director of Solar Energy Cambodia, told the Post yesterday that his company saw increases of installation of solar power systems for families whose children worked abroad and remitted money to their parents. He said that so far, there were no huge projects to equip solar panel systems in public places such as schools or hospitals in rural areas supported by NGOs, but solar panels were selling well to families in three provinces – Kampong Cham, Prey Veng and Svay Rieng. “I sold about 100 units per month, and I’ve seen an increase of around 10 per cent from month to month” he said, adding that farmers are interested in using solar energy because there were no power lines laid to their villages and they never expected to get electric power from the government. National Biodigester Programme. Programme Area. 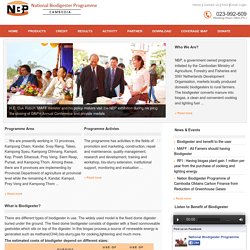 Www.un.org/esa/agenda21/natlinfo/countr/cambodia/energy.pdf. National Biodigester Programme. Prices at the pump set to fall, gov’t says, Business, Phnom Penh Post. The cost of filling up a motorbike will drop by as much as 12 per cent today after the government called on petrol retailers to fall in line with declining global oil prices. 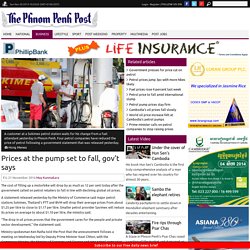 A statement released yesterday by the Ministry of Commerce said major petrol stations Sokimex, Thailand’s PTT and BVM will drop their average prices from about $1.25 per litre to close to $1.17 per litre. Smaller petrol provider Savimex will reduce its prices on average to about $1.10 per litre, the ministry said. “The drop in oil prices proves that the government cares for the people and private sector development,” the statement said. Ministry spokesman Ken Ratha told the Post that the announcement follows a meeting on Wednesday led by Deputy Prime Minister Keat Chhon, with the Commerce Ministry, the Ministry of Economy and Finance and nine petrol companies operating in Cambodia.

Companies were encouraged to reduce their prices, but only on a voluntary basis, Ratha said.