Edmund Burke: His Life and Legacy. Ian Crowe's excellent collection of short essays examines many aspects of Burke, but perhaps the most profound understanding of England's great Irishman lies in half a page of the 'Obiter Dicta' reflections of Augustine Birrell - another writer politician, connected to Ireland by the misfortune of trying to give it self-government. 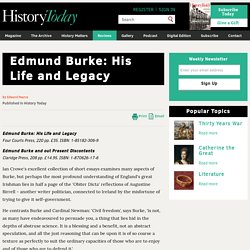 He contrasts Burke and Cardinal Newman: 'Civil freedom', says Burke, 'is not, as many have endeavoured to persuade you, a thing that lies hid in the depths of abstruse science. It is a blessing and a benefit, not an abstract speculation, and all the just reasoning that can be upon it is of so coarse a texture as perfectly to suit the ordinary capacities of those who are to enjoy and of those who are to defend it.' Here surely is that empirical, theory-mistrusting core of Burke which awakens ready English sympathy, even if his chief trumpeter today is another magnificently awkward Irishman, Conor Cruise O'Brien.

Edmund Burke invented modern conservatism. His only reward in life was to be proved right about everything I still remember the shock I felt when I was about half way through Burke’s Reflections on the Revolution in France. 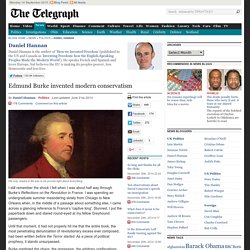 I was spending an undergraduate summer meandering slowly from Chicago to New Orleans when, in the middle of a passage about something else, I came across a glancing reference to France’s 'captive king'. Stunned, I put the paperback down and stared round-eyed at my fellow Greyhound passengers. Until that moment, it had not properly hit me that the entire book, the most penetrating denunciation of revolutionary excess ever composed, had been written before the Terror started. Edmund Burke: How did a long-dead Irishman become the hottest thinker of 2010? - UK Politics - UK - The Independent.

It's not often that the philosophical spirit animating a government can be distilled into the writing of a single thinker, still less a single work. 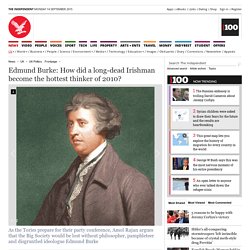 That ought, logically, to be particularly true of coalition governments, which make comrades out of enemies and a virtue out of internal contradictions. Nor do David Cameron or Nick Clegg seem temperamentally inclined to throw books on tables. Yet there is a thinker who personifies the spirit and philosophy of the present government, and the fusion of these two leaders, who share more than the members of their parties care to admit or are comfortable with.

In his embodiment of the common ground between liberals and conservatives, his understanding that the Big Society is really just an agglomeration of small societies, and his rewriting of Rousseau's contract within society as a contract between the generations, Edmund Burke is the authentic voice of the coalition agreement – a centuries-old Cleggeron, or Cameregg, if you prefer. Quote 1. Quote 2. The first important conservative thinker. Since politics is, inevitably, a rough old trade, its theorists are often uneasy practitioners. 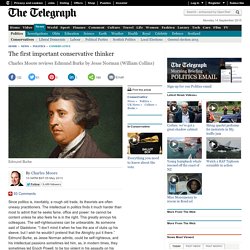 The intellectual in politics finds it much harder than most to admit that he seeks fame, office and power: he cannot be content unless he also feels he is in the right. This greatly annoys his colleagues. The self-righteousness can be unbearable. As someone said of Gladstone: ''I don’t mind it when he has the ace of clubs up his sleeve; but I wish he wouldn’t pretend that the Almighty put it there.’’ Edmund Burke, as Jesse Norman admits, could be self-righteous, and his intellectual passions sometimes led him, as, in modern times, they sometimes led Enoch Powell, to be too violent in his assaults on his opponents. Norman himself is a practising, indeed a rising politician, and so he is clear-sighted about Burke’s practical failures.

Usefully, he divides the book into two parts. The second section distils Burke’s philosophical and political wisdom, and applies it to what has happened since. History - Edmund Burke. My hero: Edmund Burke. Edmund Burke was one of the most gifted, original and complex people ever to sit in the House of Commons. 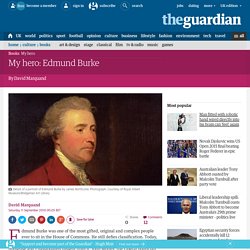 He still defies classification. Today, he is widely seen as the "father of conservatism". I think that is blinkered nonsense and I passionately dissent from it. John Morley, the Liberal politician and man of letters, wrote an admiring biography of Burke. The great liberal historian Lord Acton thought he belonged with Macaulay and Gladstone as one of the three greatest British liberals. No one can deny that there was a conservative side to Burke. A profound, sometimes anguished fellow-feeling for the victims of arbitrary power ran, like a golden thread, through Burke's 30 years in parliament. The last is a hard lesson for liberals and social democrats.