The Next Battle for Brazil: Public Sanitation. The Brazilian Educational System. This article will give you an overview of the Brazilian education system and how it directly affects the country's economic growth and development. 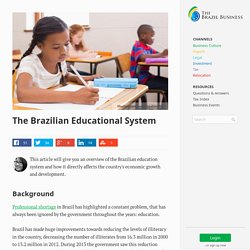 Background Professional shortage in Brazil has highlighted a constant problem, that has always been ignored by the government throughout the years: education. Brazil has made huge improvements towards reducing the levels of illiteracy in the country, decreasing the number of illiterates from 16.3 million in 2000 to 13.2 million in 2012. During 2013 the government saw this reduction stagnate. Healthcare System in Brazil. Most major urban centers have at least one private hospital and in popular tourist areas there are generally more. 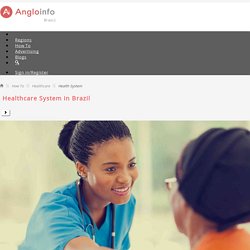 Foreigners in Brazil will find that English-speaking general practitioners, dentists and opticians are not always readily available. If in an emergency situation an English-speaker is not available, it is suggested to call an international hospital. Brazil Birth rate - Demographics. Brazil Birth rate Factbook > Countries > Brazil > Demographics ShareThis Birth rate: 14.3 births/1,000 population (2016 est.) 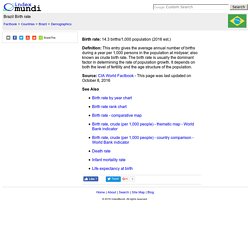 Definition: This entry gives the average annual number of births during a year per 1,000 persons in the population at midyear; also known as crude birth rate. Brazil Death rate - Demographics. Reducing Child Mortality Rates in Brazil. Poverty & Equity Data. Literacy rate in Brazil. The Office of Public Affairs (OPA) is the single point of contact for all inquiries about the Central Intelligence Agency (CIA). 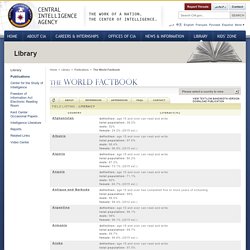 We read every letter, fax, or e-mail we receive, and we will convey your comments to CIA officials outside OPA as appropriate. However, with limited staff and resources, we simply cannot respond to all who write to us. Contact Information. Brazil Unemployment Rate. Compared with the November-January period, the number of unemployed persons jumped 8.7 percent, or by 1.1 million, to 14.0 million. 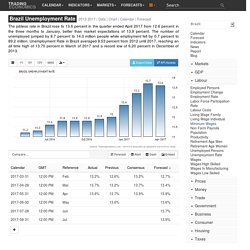 Employment fell by 0.7 percent, or by 615 thousand, to 89.2 million, with job losses in agriculture, livestock, forestry, fishing and aquaculture (-2.4 percent), construction (-4.1 percent) and trade, repair of motor vehicles and motorcycles (-2.6 percent). By contrast, there were increases in industry (1.8 percent) and accomomdation and food (3 percent). People attached to the labour force, that is, either employed or unemployed but actively seeking for job rose by 0.5 percent to 103.3 million. Those detached from the labour force dropped by 0.3 percent to 64.4 million. Foreign Debt for Brazil. Some Ingredients Are Missing for a Turnaround in Brazil PART 5 OF 6 Debt. 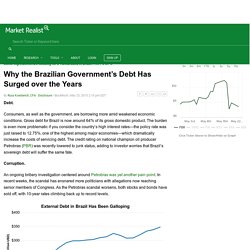 Consumers, as well as the government, are borrowing more amid weakened economic conditions. Gross debt for Brazil is now around 64% of its gross domestic product. The burden is even more problematic if you consider the country’s high interest rates—the policy rate was just raised to 12.75%, one of the highest among major economies—which dramatically increase the costs of servicing debt. The credit rating on national champion oil producer Petrobras (PBR) was recently lowered to junk status, adding to investor worries that Brazil’s sovereign debt will suffer the same fate. Brazil's Economic System. By Danylle Williams General Characteristics of Agricultural, Industrial, and Information Age Economic Systems Agricultural Age Economic Systems: Largely feudal economic systems and earlier ancient empire economic systems based on slavery. 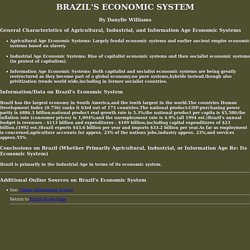 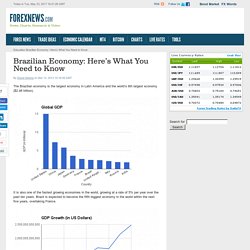 It is also one of the fastest growing economies in the world, growing at a rate of 5% per year over the past ten years. Brazil is expected to become the fifth biggest economy in the world within the next five years, overtaking France. This rapid growth has been achieved on the back of a diverse and sophisticated economy which is made up of service industries, commodities including iron ore, coal and oil, foodstuffs such as, sugar cane, soybeans and coffee, as well as aerospace and technology companies. Components of the Brazilian Economy Services.

Population pyramid for Brazil. Brazil's Wealth. Geographical factors that affect development. This is part 2 in a series on why some countries remain poor. 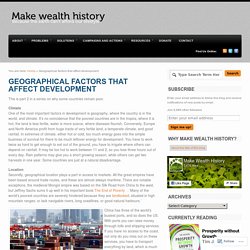 Climate One of the most important factors in development is geography, where the country is in the world, and climate. It’s no coincidence that the poorest countries are in the tropics, where it is hot, the land is less fertile, water is more scarce, where diseases flourish. Conversely, Europe and North America profit from huge tracts of very fertile land, a temperate climate, and good rainfall. In extremes of climate, either hot or cold, too much energy goes into the simple business of survival for there to be much leftover energy for development. Human Development Reports. Brazil Exports, Imports, and Trade Partners. Brazil is the 21st largest export economy in the world and the 34th most complex economy according to the Economic Complexity Index (ECI). 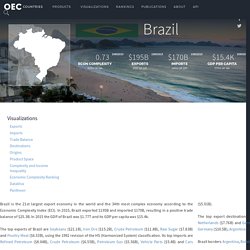 Hence, social and environmental strategies need to be part of the business plan. In 2003, WWF’s Forest Conversion Initiative (now WWF Forest Conversion Programme) began addressing the severe environmental impacts of soy plantations in Brazil, with a focus on 3 key ecoregions - the Amazon, the Atlantic Forest and the Cerrado (Brazilian savannas). WWF is doing this by documenting these impacts in case studies done in the 3 ecoregions. As part of this effort, WWF’s Trade and Environment programme has focused on the expansion of soy plantations in the Cerrado region. Conservation for Life: Committing to the Permanent Protection of the World’s Most Important Parks. About the World wildlife fund. WWF-US is part of the WWF global network which has worked for more than 50 years to protect the future of nature. In 2016, WWF embraced a bold new strategy and transformation designed to make the organization stronger and even more effective in tackling the challenges ahead.