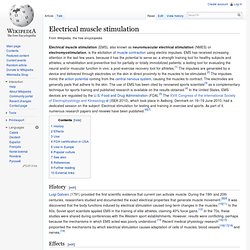 During the 19th and 20th centuries, researchers studied and documented the exact electrical properties that generate muscle movement.[8][9] It was discovered that the body functions induced by electrical stimulation caused long-term changes in the muscles.[10][11] In the 60s, Soviet sport scientists applied EMS in the training of elite athletes, claiming 40% force gains.[12] In the 70s, these studies were shared during conferences with the Western sport establishments. However, results were conflicting, perhaps because the mechanisms in which EMS acted was poorly understood.[13] Recent medical physiology research[14][15] pinpointed the mechanisms by which electrical stimulation causes adaptation of cells of muscles, blood vessels[16][17][18] and nerves.[19] Effects[edit] Use[edit] FDA certification in USA[edit]

TENS, by definition, covers the complete range of transcutaneously applied currents used for nerve excitation although the term is often used with a more restrictive intent, namely to describe the kind of pulses produced by portable stimulators used to treat pain.[1] The unit is usually connected to the skin using two or more electrodes. 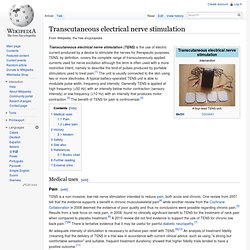 A typical battery-operated TENS unit is able to modulate pulse width, frequency and intensity. Generally TENS is applied at high frequency (>50 Hz) with an intensity below motor contraction (sensory intensity) or low frequency (<10 Hz) with an intensity that produces motor contraction.[2] The benefit of TENS for pain is controversial.[3] Electronic muscle stimulator circuit. This is an electronic muscle stimulator circuit that stimulates nerves of that part of your body where electrodes are attached. 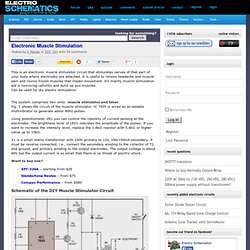 It is useful to relieve headache and muscle pain and revive frozen muscles that impair movement. It’s mainly muscle stimulation aid is removing cellulitis and build up you muscles. Can be used for diy electro stimulation. The system comprises two units: muscle stimulator and timer. Fig. 1 shows the circuit of the muscle stimulator. Using potentiometer VR1 you can control the intensity of current sensing at the electrodes. X1 is a small mains transformer with 220V primary to 12V, 100/150mA secondary. 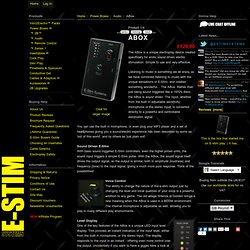 Simple to use and very effective. Listening to music is something we all enjoy, so we have combined listening to music with the unique sensations of E-Stim, and created something wonderful... The ABox. Rather than just being sound triggered like a 1970's disco, the ABox is sound driven. The input, whether from the built in adjustable sensitivity microphone or the stereo input, is converted directly to a powerful and controllable electrostim signal. You can use the built in microphone, or even plug your MP3 player and a set of headphones giving you a sound/electro experience has been described by some as 'out of this world', and by others as 'just plain evil'. Sound Driven E-Stim With basic sound triggered E-Stim controllers, even the higher priced units, the sound input triggers a simple E-Stim pulse. Audio Stimulation Solo players will appreciate the stereo input.