Zoologger: The fish that kill with special-ops signals - environment - 25 June 2014. Great White Shark Origins Found. Great white sharks are among the world's largest living predatory animals, and now we have a better idea of their ancestors and how these toothy media superstars evolved. 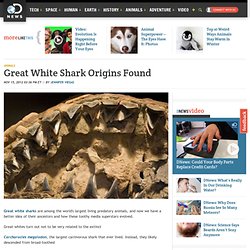 Great whites turn out not to be very related to the extinct Carcharocles megalodon, the largest carnivorous shark that ever lived. Instead, they likely descended from broad-toothed mako sharks. 6 Unassuming Animals That Are Secretly Immortal. For centuries, mankind has tried absolutely everything to achieve immortality, from searching for mystical fountains of youth to literally putting corpses in cold storage hoping the future can un-kill them. 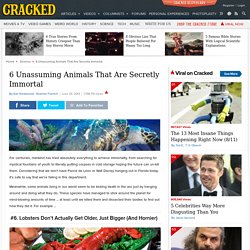 Considering that we don't have Ponce de Leon or Walt Disney hanging out in Florida today, it's safe to say that we're failing in this department. Meanwhile, some animals living in our world seem to be kicking death in the ass just by hanging around and doing what they do. These species have managed to stick around the planet for mind-blowing amounts of time ... at least until we killed them and dissected their bodies to find out how they did it. For example ... #6. Jupiterimages/liquidlibrary/Getty Images When some animal activists found out that a restaurant in New York City was offering to serve a massive 20-pound lobster, they rushed to try to save the behemoth. Orcas vs Sperm Whales. I just returned from an epic expedition to Sri Lanka where our team spent 9 days at sea in search of Blue Whales. 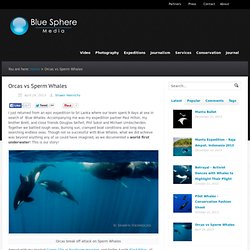 Accompanying me was my expedition partner Paul Hilton, my brother Brett, and close friends Douglas Seifert, Phil Sokol and Michael Umbscheiden. Together we battled rough seas, burning sun, cramped boat conditions and long days searching endless seas. Though not so successful with Blue Whales, what we did achieve was beyond anything any of us could have imagined, as we documented a world first underwater! This is our story!

Orcas break off attack on Sperm Whales. Killer Whales and Compassion. In many animal societies, if a member of a group is gravely wounded or born with disabling deformities, that animal becomes an unsustainable burden on the others, and is often left behind at the mercy of predators, hunger and disease. 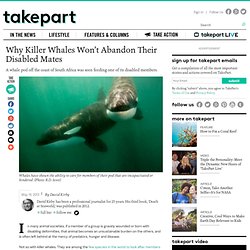 Not so with killer whales. They are among the few species in the world to look after members of their family who cannot look after themselves. Found: Whale thought extinct for 2 million years. The pygmy right whale, a mysterious and elusive creature that rarely comes to shore, is the last living relative of an ancient group of whales long believed to be extinct, a new study suggests. 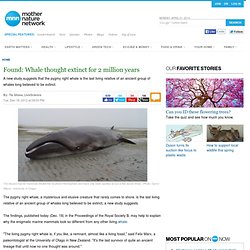 The findings, published today (Dec. 18) in the Proceedings of the Royal Society B, may help to explain why the enigmatic marine mammals look so different from any other living whale. "The living pygmy right whale is, if you like, a remnant, almost like a living fossil," said Felix Marx, a paleontologist at the University of Otago in New Zealand. "It's the last survivor of quite an ancient lineage that until now no one thought was around.

" Living fossil. 5 Fish Clearly Designed by a Madman. You know the problem with Sharktopus, the SyFy original movie about a half shark, half octopus monster? 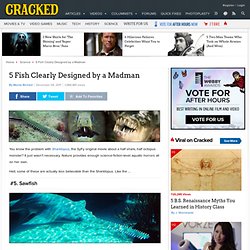 It just wasn't necessary. Nature provides enough science-fiction-level aquatic horrors all on her own. How large can lobsters grow? Big! But no one knows how big. With New England diving into lobster season, seafood lovers across the country will don their bibs, grab some lemon wedges, and dine on nice one-pound crustaceans. 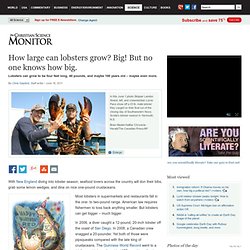 Skip to next paragraph Long live the lobster! Dan Vasconcellos Subscribe Today to the Monitor Click Here for your FREE 30 DAYS ofThe Christian Science MonitorWeekly Digital Edition. Zoologger: Pilot whales cuddle in the abyss - life - 21 June 2013. Zoologger is our weekly column highlighting extraordinary animals – and occasionally other organisms – from around the world Species: Globicephala melasHabitat: Throughout the North Atlantic and Mediterranean oceans, with a separate population in the Southern Ocean around Antarctica. 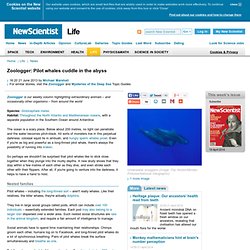 "Talking" Whale Could Imitate Human Voice. Birds aren't the only animals that impersonate people—a beluga whale learned how to mimic the human voice, a new study suggests. The "talking whale" was NOC, a captive whale that lived for 30 years at the National Marine Mammal Foundation in San Diego, California, until his death in 1999. Researchers first noticed something peculiar back in 1984, when they heard people talking around NOC's enclosure when no one else was nearby. Hear NOC the Beluga Whale "Talk" "You could hear there was a conversation, but you couldn't make out what they were saying," said study co-author Sam Ridgway of the U.S. Navy Marine Mammal Program in San Diego. DNA changes may show how whales adapted to water.

Comparing the genetic material of whales has revealed DNA changes that may have helped the animals adapt to living in water. 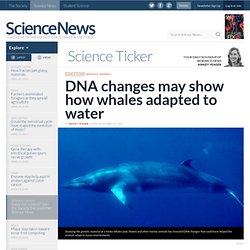 Whales’ closest living relatives are species of hippopotamuses. The earliest, fully aquatic whalelike animals probably lived around 52 million to 54 million years ago. To determine what adaptations could have helped the animals become fully aquatic, scientists studied the genomes of three minke whales, a fin whale, a bottlenose dolphin and a finless porpoise. The results show that groups of genes related to the breakdown of molecules produced in low-oxygen environments were expanded in the animals and that the animals have specific genetic mutations that appear to help regulate antioxidants and enzymes controlling blood pressure and levels of salt in their bodies, the researchers report November 24 in Nature Genetics.

Gene groups related to body hair and sensory receptors were constricted in the animals. Why Shark Embryos Eat Each Other Up in Utero. Shark embryos cannibalize their littermates in the womb, with the largest embryo eating all but one of its siblings. 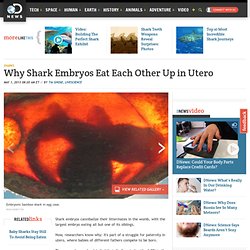 Now, researchers know why: It's part of a struggle for paternity in utero, where babies of different fathers compete to be born. The researchers, who detailed their findings today (April 30) in the journal Biology Letters, analyzed shark embryos found in sand tiger sharks (Carcharias taurus) at various stages of gestation and found that the later in pregnancy, the more likely the remaining shark embryos had just one father. (In Photos: Baby Sharks Show Off Amazing Ability) NEWS: Great White Sharks Eat Far More Than Thought. Baby Sand Tiger Sharks Devour Their Siblings While Still in the Womb. Mode of Reproduction - Ovoviviparity. Www.diveoz.com.au - Grey Nurse Sharks - Life History. The Grey Nurse Shark is in real danger of disappearing from the East coast of Australia!

It is believed that there could be as few as 300 remaining on the east coast making the grey nurse shark Australia's most endangered species. The Grey Nurse Shark Carcharias taurus (Rafinesque, 1810) is a threatened species and totally protected in Australian waters.