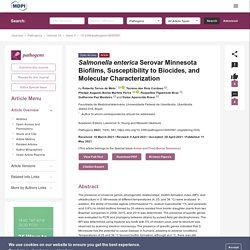 Minnesota at different temperatures (4, 25, and 36 °C) were analyzed. In addition, the ability of biocidal agents (chlorhexidine1%, sodium hypochlorite 1%, and peracetic acid 0.8%) to inhibit biofilms formed by 20 strains isolated from broiler slaughter plants from two Brazilian companies in 2009, 2010, and 2014 was determined. The presence of specific genes was evaluated by PCR and phylogeny between strains by pulsed-field gel electrophoresis. The BFI was determined using tryptone soy broth with 5% of chicken juice, and its structure was observed by scanning electron microscopy.

The presence of specific genes indicated that S. ►▼ Show Figures Figure 1 This is an open access article distributed under the Creative Commons Attribution License which permits unrestricted use, distribution, and reproduction in any medium, provided the original work is properly cited Figure 1. FOODS 04/12/19 Efficacy of Commercial Sanitizers Used in Food Processing Facilities for Inactivation of Listeria monocytogenes, E. Coli O157:H7, and Salmonella Biofilms.

Bacteria entrapped in biofilms are a source of recurring problems in food processing environments. 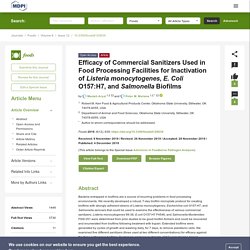 We recently developed a robust, 7-day biofilm microplate protocol for creating biofilms with strongly adherent strains of Listeria monocytogenes, Escherichia coli O157:H7, and Salmonella serovars that could be used to examine the effectiveness of various commercial sanitizers. Listeria monocytogenes 99-38, E.coli O157:H7 F4546, and Salmonella Montevideo FSIS 051 were determined from prior studies to be good biofilm formers and could be recovered and enumerated from biofilms following treatment with trypsin. Extended biofilms were generated by cycles of growth and washing daily, for 7 days, to remove planktonic cells. We examined five different sanitizers (three used at two different concentrations) for efficacy against the three pathogenic biofilms. ►▼ Show Figures Figure 1.

THE EUROPEAN RESEARCH JOURNAL - 2019 - Study of biofilm formation in Salmonella species isolated from food. Foods 2017, 6(12), 106; Effect of Food Residues in Biofilm Formation on Stainless Steel and Polystyrene Surfaces by Salmonella enterica Strains Isolated from Poultry Houses. Salmonella spp. is a major food-borne pathogen around the world. 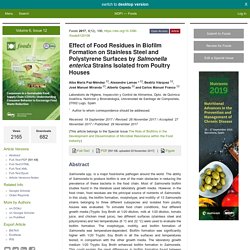 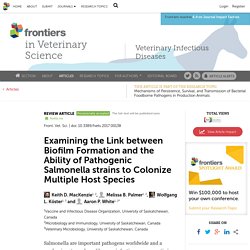 The ability of strains to form biofilms, which is a multicellular behavior characterized by the aggregation of cells, is predicted to be a conserved strategy for increased persistence and survival. It may also contribute to the increasing number of infections caused by ingestion of contaminated fruits and vegetables. There is a correlation between biofilm formation and the ability of strains to colonize and replicate within the intestines of multiple host species. These strains predominantly cause localized gastroenteritis infections in humans. International Journal of Food Microbiology Volume 253, 17 July 2017,Effects of meat juice on biofilm formation of Campylobacter and Salmonella. LWT - Food Science and Technology Volume 75, January 2017, Prevalence, biofilm formation and virulence markers of Salmonella sp. and Yersinia enterocolitica in food of animal origin in Poland. Molecular Microbiology (2002) 43(3), 793–808 Genetic analysis of Salmonella enteritidis biofilm formation: critical role of cellulose.

Summary We report here a new screening method based on the fluorescence of colonies on calcofluor agar plates to identify transposon insertion mutants of Salmonella enteritidis that are defective in biofilm development. 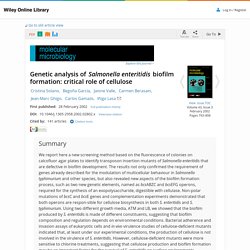 The results not only confirmed the requirement of genes already described for the modulation of multicellular behaviour in Salmonella typhimurium and other species, but also revealed new aspects of the biofilm formation process, such as two new genetic elements, named as bcsABZC and bcsEFG operons, required for the synthesis of an exopolysaccharide, digestible with cellulase. Non-polar mutations of bcsC and bcsE genes and complementation experiments demonstrated that both operons are respon-sible for cellulose biosynthesis in both S. enteritidis and S. typhimurium. Introduction Results Biofilm formation capacity and cellulose production is widespread among natural isolates of S. enteritidis Screening for S. enteritidis mutants defective in biofilm formation. International Journal of Food Microbiology 167 (2013) 293–302 In situ characterization and analysis of Salmonella biofilm formation under meat processing environments using a combined microscopic and spectroscopic approach. 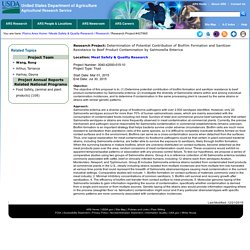 Approach: Salmonella enterica are a diverse group of foodborne pathogens with over 2,500 serotypes identified. Arq. Bras. Med. Vet. Zootec., v.67, n.2, p.642-646, 2015 Sanitizer resistance of biofilm-forming Salmonella isolated from meat products. Tropical Journal of Pharmaceutical Research June 2015; 14 (6): 1075-1079 Effect of Carvacrol on Salmonella Saintpaul Biofilms on Stainless Steel Surface. AMERICAN SOCIETY FOR MICROBIOLOGY 15/01/14 Food Processors Beware: Salmonella Biofilms Incredibly Resistant to Powerful Disinfectants. Once Salmonella bacteria get into a food processing facility and have an opportunity to form a biofilm on surfaces, it is likely to be extraordinarily difficult, if not impossible, to kill it, according to research published ahead of print in the journal Applied and Environmental Microbiology. 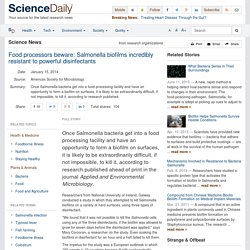 Researchers from National University of Ireland, Galway conducted a study in which they attempted to kill Salmonella biofilms on a variety of hard surfaces, using three types of disinfectant. "We found that it was not possible to kill the Salmonella cells using any of the three disinfectants, if the biofilm was allowed to grow for seven days before the disinfectant was applied," says Mary Corcoran, a researcher on the study. Even soaking the biofilms in disinfectant for an hour and a half failed to kill them. The research uncovered nothing special about that specific strain. 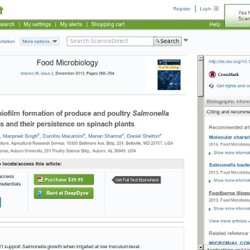 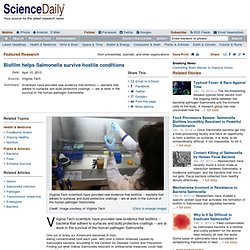 One out of every six Americans becomes ill from eating contaminated food each year, with over a million illnesses caused by Salmonella bacteria, according to the Centers for Disease Control and Prevention. Finding out what makes Salmonella resistant to antibacterial measures could help curb outbreaks. Researchers affiliated with the Fralin Life Science Institute discovered that in addition to protecting Salmonella from heat-processing and sanitizers such as bleach, biofilms preserve the bacteria in extremely dry conditions, and again when the bacteria are subjected to normal digestive processes. The study is now online in the International Journal of Food Microbiology and will appear in the April issue. 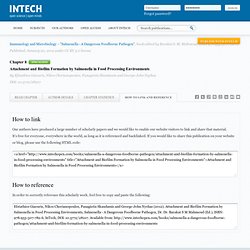 It's free for everyone, everywhere in the world, as long as it is referenced and backlinked. If you would like to share this publication on your website or blog, please use the following HTML code: Food Control Volume 29, Issue 1, January 2013, Changes in resistance of Salmonella Typhimurium biofilms formed under various con. BMC Veterinary Research 2009, 5:20 Biofilm forming abilities of Salmonella are correlated with persistence in fish meal- and fee.

Bacterial strains and culture conditions A total of 116 S. enterica strains of serovar Agona (n = 39), serovar Montevideo (n = 30), serovar Senftenberg (n = 34) and serovar Typhimurium (n = 13) were used in this study, including 111 strains from Norwegian feed and fish meal factories, isolated in the years 1991–2006 [7,23], as well as the National reference strains of serovar Agona (FHBA266), serovar Montevideo (FHBA46), serovar Senftenberg (FHBA87) and serovar Typhimurium strains ATCC 14028 and ATCC 2700720D (LT2). The factories that submitted Salmonella to this study all have internal Salmonella control, based on the HACCP system. Samples were taken once or twice a month throughout the production period, from products as well as from critical control points in the environment such as filters, drains, product contact surfaces and other surfaces. Some factories also collected samples from raw materials. Environmental samples were collected as dust, incrustations and swabs.