But only for touring and not technical downhills and such.

YouTube. Canning Stock Route by Bike 2005. Creating the Baja Divide. The Baja Divide is a rugged 1,700 mile off-pavement bikepacking route down the length of the Baja California peninsula, from San Diego, CA, USA to San Jose del Cabo, BCS, MX, researched and developed by Nicholas Carman and Lael Wilcox in the winter and spring of 2015-16. 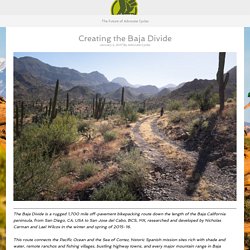 ESPIRITU LIBRE. Day 172 - Santo Tomas, Baja California, MX - 5288 km Baja California is the peninsula aiming south east with on one side the Pacific and on the other the Sea of Cortez, or Gulf of California. 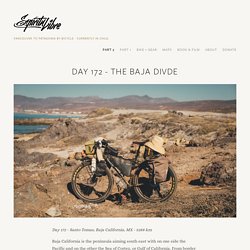 From border town Tijuana it’s 1500 km on MEX1, the only ongoing road down to La Paz, where you can take a boat to the Mexican mainland. Popular among mountain bikers and touring cyclists is the Baja Divide, a recently mapped route from north to south via dirt roads and single tracks. It’s a scenic route which requires big tires and a lightweight setup, otherwise you’ll be pushing your bike most of the way because many roads are sandy. On The Hunt 2019. Bundian Survey Public. Hunt 1000. Hunt 1000 Info Night. 5 Things I Learnt On The Hunt 1000 - We Are Explorers. Across The Kimberley on the Gibb River Road. The Kimberley in the northern pocket of Western Australia is a feast of stunning and unique geology, with weathered mountain ranges carved out of ancient reefs. 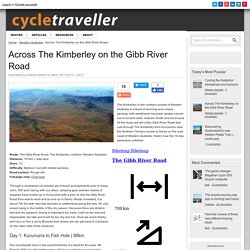 Graham Smith and his bicycle hit the dusty red dirt of the Gibb River Road that cuts through The Kimberley from Kununurra near the Northern Territory border to Derby on the east coast of Western Australia. Here's how the 10-day adventure unfolded. Route: The Gibb River Road, The Kimberley, northern Western AustraliaDistance: 707km + side tripsDays: 10Difficulty: Medium, but with limited servicesRoad surface: Rough dirtFull-page map: Click here Through a somewhat convoluted set of travel arrangements prior to today, John, Will and I along with our bikes, camping gear and two weeks of supplies have ended up in Kununurra with a plan to ride the Gibb River Road from east to west and so end up in Derby. Mostly unsealed, it is about 700 km with very few services or settlements along the way. Day 1: Kununurra to Fish Hole | 88km Review. Bundian Way Home. Routes. Trans Ecuador Mountain Bike Route: Dirt Road Version. At over 1300km in length, TEMBR Dirt can be tackled in its entirety, or broken up into six parts that can be section ridden. 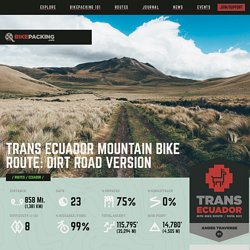 Listed below is a suggested breakdown, splitting the ride into five digestible portions. Although the segments vary in length, each offers a suitable locale to spend a rest day or two off the bike. Note that TEMBR Dirt is still being fine-tuned and is subject to modifications. For the latest updates, be sure to download the gpx from Ride With GPS and take note of the waypoints and the details within each.

Please let us know if you run into any issues or inconsistencies. Tulcan to Otovalo: 235km (5 days) Additional notes El Angel is small, low key, with a good GH and food; a good rest spot. Riding north and like singletrack? The descent to Otovalo follows an awesome water channel. May 2018: Please read update at the top of this post re security in this section, due to illegal mining activity Otovalo to Tumbaco (possible side trip to Quito): 121km (2-3 days) Market Life. 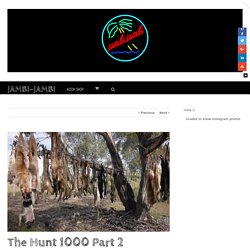 Find that hurr. The Hunt 1000 was a difficult off-road traverse across the great dividing range of NSW and Victoria’s high country. Through rough and rocky fire trails, alpine walking tracks, and rugged land from where the most iconic stories of Australian bushman were born. Grey Mare Hut was still warm in the morning. Frost was on the window and the hut in a very weak light.

Even though I wasn’t carrying any cooking gear I put the dried pasta that had been left by previous guests in my bag, incase I had the opportunity to use it. Un-racing the Hunt 1000. Long-distance endurance races have been a fixture of the international bikepacking (lightweight touring) scene for years, and now they're cropping up in Australia as well. 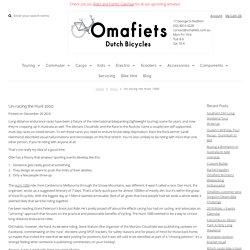 The Monaro Cloudride, and the Race to the Rock (to name a couple) are self-supported, multi-day races on mixed terrain. To win these races you need to endure brutal sleep deprivation: Race the Rock winner Sarah Hammond described visual hallucinations and microsleeps on the final stretch. You're also unlikely to be riding with more than one other person, if you're riding with anyone at all. That's not really my idea of a good time. Ollie has a theory that amateur sporting events develop like this: Someone gets really good at somethingThey design an event to push the limits of their abilitiesOnly a few people show up The Hunt 1000 ride, from Canberra to Melbourne through the Snowy Mountains, was different. I've been reading Grant Peterson's book Just Ride. Old habits, however, die hard.

How to Use a Compass. Lone wanderer’s Wagga travels. JOHN Cadoret is a fair dinkum Aussie swagman.For the past 35 years he has lived on the road, walking across the barren landscapes of Australia and sleeping under the stars.His favourite place is the Hay Plains because it is “deadset flat” and “you can see a car coming for 15 minutes before it passes you”. 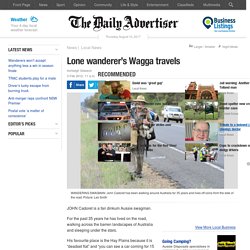 WANDERING SWAGMAN: John Cadoret has been walking around Australia for 35 years and lives off coins from the side of the road. Picture: Les Smith JOHN Cadoret is a fair dinkum Aussie swagman. Gippsland Plains Rail Trail.