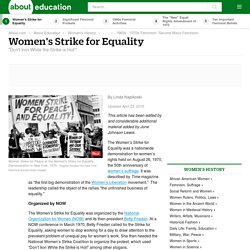 This article has been edited by and considerable additional material added by Jone Johnson Lewis. Obituary: Betty Friedan. Betty Friedan, who has died of congestive heart failure aged 85, played an influential role in the re-emergence of the United States women's movement in the 1960s. 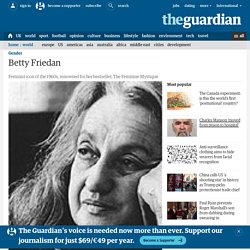 In her 1963 bestseller The Feminine Mystique, she articulated "the problem that has no name" - the misery, self-hatred, neurosis and frustration of suburban middle-class women festering in domesticity. She blamed educators, advertising men, psychologists and sociologists for driving women out of the workforce and public life; the result was to be sacks of grateful letters and a message that had an international impact.

American women were already stirring in 1963: black and white women had been mobilised through the civil rights movement and through community politics. Feminist Quotes: What Women Have Said About Feminism. By Jone Johnson Lewis Updated October 01, 2015. 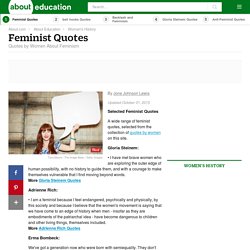 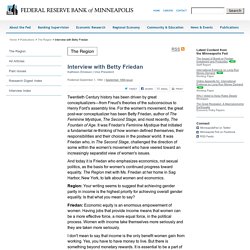 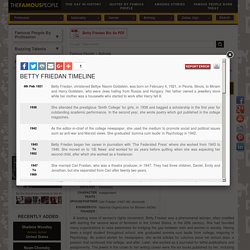 Her father owned a jewellery store while her mother was a housewife who started to work after Harry fell ill. Audi Super Bowl commercial has strong statement on pay equality. Ad Meter 2017: Audi Audi's Super Bowl ad, featuring a man watching her daughter win on the race track, advocates for equal pay. 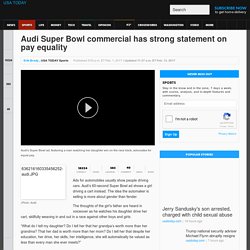 Ads for automobiles usually show people driving cars. Audi’s 60-second Super Bowl ad shows a girl driving a cart instead. The idea the automaker is selling is more about gender than fender. The thoughts of the girl’s father are heard in voiceover as he watches his daughter drive her cart, skillfully weaving in and out in a race against other boys and girls: “What do I tell my daughter? List of Gender Specific Jobs for Males. Featured Author: Betty Friedan. Jewish Women's Archive. A Comparison of the Career Attainments of Men and Women Healthcare Executives. Executive Summary Download the entire report (PDF) Background This is the fourth report in a series of research surveys designed to compare the career attainments of men and women healthcare executives. 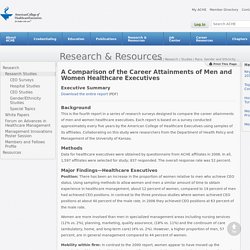 Each report is based on a survey conducted approximately every five years by the American College of Healthcare Executives using samples of its affiliates. Collaborating on this study were researchers from the Department of Health Policy and Management of the University of Kansas. The latest: Women earn only 74 cents a dollar - Nov. 9, 2015. Yet another study has found overwhelming evidence that men get paid more than women. 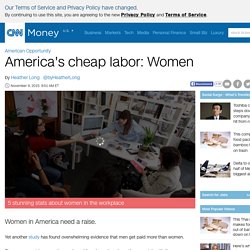 The pay gap exists even when male and female workers have the same job with the same qualifications. Overall, American women earn just 74 cents for every $1 a man earns, PayScale found after looking at data from over a million people. Other startling findings from the report include: There's no industry where women earn the same or more than men.There's no state where women earn more than men. The gap gets worse the higher up the job ladder you go. "This isn't a women's issue, this is a family, community and economic issue," says Victoria Budson, executive director of the Harvard Kennedy School's Women and Public Policy Program. Related: Looking for a better job? Women even paid less for same work. Equal Rights Amendment passed by Congress - Mar 22, 1972. Also on this day Lead Story In an effort to raise funds to pay off debts and defend the vast new American territories won from the French in the Seven Years’ War (1756-1763), the British government passes the Stamp Act on this day in 1765. 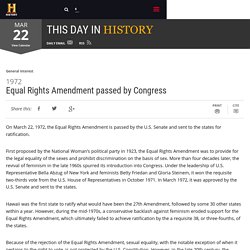 The legislation levied a direct tax on all materials printed for... Betty Friedan Quotes - BrainyQuote. Learning to Give. Laurie Tuttle Biographical Highlights. 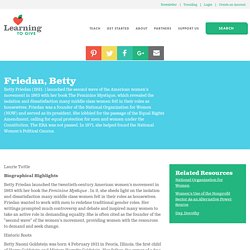 Betty Friedan Photos et images de collection. The Mother of Feminism. But once Jonathan got to Fifth Avenue, he couldn’t get anywhere near his mother. The street was teeming with people. When the march ended at Bryant Park, Jonathan climbed up on a wall so he could glimpse Friedan standing on a podium. She spoke to an audience in the tens of thousands. “This was the moment I realized who she was,” he says. LOS ANGELES TIMES INTERVIEW : Betty Friedan : Beyond the 'Feminine Mystique:' A New Era of Women's Rights - latimes. Although now 71, and widely acknowledged as a founder of the modern women's movement, Betty Friedan doesn't quite make it as an Elder Stateswomen revisiting past achievements.

Among other things, she won't sit still. Commuting between academic posts at NYU and USC, where she is a professor attached to no fewer than three departments, she remains embattled against demons of male chauvinism and other manifestations of oppression. Ever since the publication, in 1963, of her instantly successful "The Feminine Mystique," urging women to question their assigned social roles, Friedan has upped the ante. Beginning with the founding of the National Organization for Women, in 1966, she has been associated with every campaign of the women's movement. But she is also controversial within feminist ranks. Friedan is an ardent feminist who respects traditional family values--with the caution that they be non-exploitative. Betty Friedan. Author of The Feminine MystiqueCo-founder of the National Organization for WomenOnetime member of the Young Communist LeagueLongtime veteran of professional journalsm in the Communist LeftReferred to the American household as “a comfortable concentration camp”Co-founded the National Association for the Repeal of Abortion Laws, which would later change its name to NARAL Pro-Choice AmericaDied in 2006 Betty Friedan was born Bettye Naomi Goldstein on February 4, 1921, in Peoria, Illinois.

Her father was a jewelry store owner; her mother quit her job as the women's-page editor of a newspaper and stayed home to raise her children. Later in life, Betty would describe her mother as someone who had suffered from “impotent rage” because she could find “no place to channel her terrific energies.” Federal Reserve Bank of Minneapolis. First Measured Century: Interview: Betty Friedan. BETTY FRIEDAN Author, The Feminine Mystique QUESTION: Betty, let's begin with the obvious time and place, your birth. Where are you from? BETTY FRIEDAN: I was born and grew up in Peoria, Illinois, which you might say is the middle of the middle of America, what used to be a synonym almost: "hick," "hayseed" or "will it play in Peoria".

Well, I played in Peoria, but I got out of there. QUESTION: What did your family do? Betty Friedan - Women on 20s. Betty Friedan (1921 - 2006) “The problem that has no name — which is simply the fact that American women are kept from growing to their full human capacities — is taking a far greater toll on the physical and mental health of our country than any known disease.” According to her 2006 obituary in the New York Times, Betty Friedan will “forever be known as the suburban housewife who started a revolution with The Feminine Mystique. Rarely has a single book been responsible for such sweeping, tumultuous and continuing social transformation.”

Although she received a fellowship to study at the University of California, she chose instead to go to New York to work as a reporter. Friedan got married in 1947 and had three children. She returned to work after her first child was born, but lost her job when she was pregnant with her second, according to The Christian Science Monitor. Friedan then stayed home to care for her family. But she was restless as a homemaker and began to wonder if other women felt the same way. Betty Friedan - Women's Rights Activist, Journalist.

Finished for the Bibliography