Temple of Ra - The Universal Master. Per-Bast.org. (Please note: even though per-Bast.org is under new ownership, the following essay is still copyright © S.D. 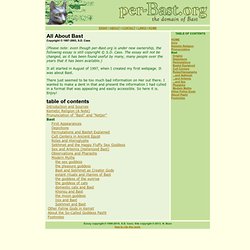 Cass. The essay will not be changed, as it has been found useful by many, many people over the years that it has been available.) It all started in August of 1997, when I created my first webpage. It was about Bast. There just seemed to be too much bad information on Her out there. Hymns and Litanies to Bast « Fiercely Bright One. I don’t normally honor Bast, but I have some friends who do, so here are some hymns and praises to Bast, Eye of Ra, Lady of the Ointment Jar, Lady of Perfume, Mistress of the Sistrum and Strong Lady. 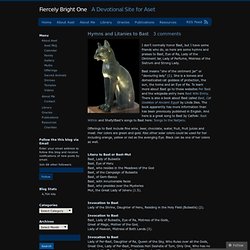 Bast means “she of the ointment jar” or “devouring lady” (1). She is a lioness and domesticated cat goddess of protection, the sun, the home and an Eye of Ra. To learn more about Bast go to these websites Per Bast and the wikipedia entry here Bast Wiki Entry. There is also a book about Bast called Bast, Cat Goddess of Ancient Egypt by Linda Illes. The book apparently has more information than has been previously published in English. Bastet.jpg (JPEG Image, 248 × 472 pixels) Bast. From New World Encyclopedia Bast as a lioness In Ancient Egypt, Bast (also spelled Bastet, Baset, Ubasti, and Pasht) was an ancient feline goddess who was worshiped since the early dynastic period (ca. 3000-2700 B.C.E.). 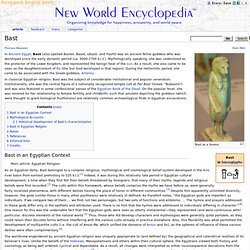 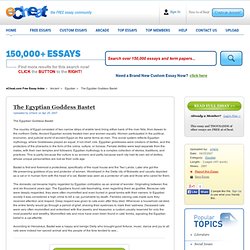 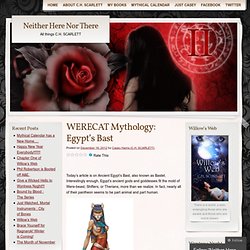 Interestingly enough, Egypt’s ancient gods and goddesses fit the mold of Were-beast, Shifters, or Therians, more than we realize. In fact, nearly all of their pantheon seems to be part animal and part human. Cats were very sacred in Ancient Egypt. Not only did they keep vermon down–which could easily cause plagues–but they also kept evil away. So it is of no surprise that Bast was considered to be the mother of all cats. Bronze figure of the cat-headed goddess Bastet.

From Egypt Late Period or Ptolemaic Period, about 664-30 BC Bastet shaking a sistrum and holding an aegis, with kittens at her feet The name of the cat goddess means 'she of the ointment jar', reflecting her soothing and peaceful nature. 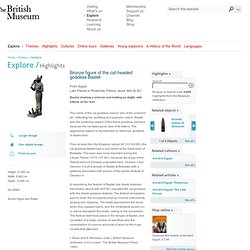 Bastet was the protective aspect of the feline goddess, perhaps because the cat takes good care of its kittens. The aggressive aspect is represented by Sekhmet, goddess of destruction. From at least the Old Kingdom (about 2613-2160 BC) the cat goddess Bastet had a cult centre at the Delta town of Bubastis. Bastet's Stories. Bastet She was the wife (or consort) of Ptah (Ptah-seker-ausar) and had children, Nefertum and the lion-headed Mahes (Mihos). 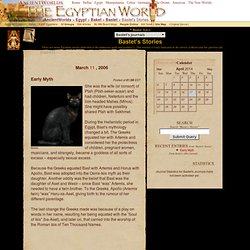 She might have possibly shared Ptah with Sekhmet. During the Hellenistic period in Egypt, Bast’s mythology changed a bit. Bastet. (Bast) Symbols: cat, lioness, sistrum, Udjat (Eye of Horus) Cult Center: Bubastis Links: The Name of Bast The goddess Bastet was usually represented as a woman with the head of a domesticated cat. 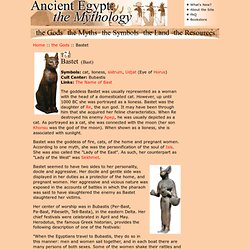 However, up until 1000 BC she was portrayed as a lioness. The Goddesses of Ancient Egypt. By Shira Table of Contents Introduction. 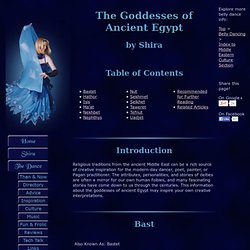 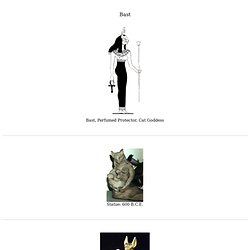 Her symbols are cats. Egyptian mythology: Who is Bastet? The Egyptian goddess Bastet is one of the earlier deities of the Nile region. She was originally the lioness protector of Lower Egypt, a warrior woman with the head of lioness who defended the pharaoh of Egypt, the royal family, and the sun-god Ra. Eventually her role as the protector of Egypt passed to another more popular goddess, Sekhmet, also a warrior woman with the head of a lioness. This evolution of religion occurred repeatedly as Upper and Lower Egypt merged into a single nation, combining the separate but similar gods of the two regions.

And so Bastet’s diminished role transformed her from a lioness into a cat. Bastet Ancient Egyptian Cat Goddess. Bastet, Egyptian Goddess of Sensual Pleasure (Basthet, Basthetet, Bast) Bastet, an ancient Egyptian goddess, was playful and friendly. She was also known for her fierce protective nature. Bastet (also known as Basthet, or simply as Bast) was one of the earliest of the Egyptian goddesses but was worshipped for several centuries. Her association with cats is apparent in the images of her that survive. Early statues of the Egyptian goddess Bastet reveal her either as a woman accompanied by a cat or in actually taking on the form of a cat ... as a slender woman who is half-cat or as a totally feline creature.

Bastet, as a sun goddess was charged with protecting her aged father, the powerful Sun God Ra. The goddess Bastet's followers kept domesticated cats in her honor and treated them with great respect. Bastet. The Egyptian cat-headed goddess, Bastet was strictly a solar deity until the arrival of Greek influence on Egyptian society, when she became a lunar goddess due to the Greeks associating her with their Artemis. Dating from the 2nd Dynasty (roughly 2890-2686 BCE), Bastet was originally portrayed as either a wild desert cat or as a lioness, and only became associated with the domesticated feline around 1000 BCE. She was commonly paired with Sakhmet, the lion-headed goddess of Memphis, Wadjet, and Hathor. Bastet was the "Daughter of Ra", a designation that placed her in the same ranks as such goddesses as Maat and Tefnut. Additionally, Bastet was one of the "Eyes of Ra", the title of an "avenger" god who is sent out specifically to lay waste to the enemies of Egypt and her gods.

The cult of Bastet was centered in Bubastis (located in the delta region, near modern- day Zagazig) from at least the 4th Dynasty. Per-Bast.org. Myth: sex and sexuality It seems logical to the Western mind to link a cat goddess with sexuality, since felines are commonly associated with femininity and sex in our culture. However, in ancient Egypt it is clear based on imagery and offerings that it was Het-hert [GR: Hathor], not Bast, who most commonly presided over feminine appeal and warmth.

That said, some scholars have concluded that the presence of a cat under a woman's chair in funerary images is a sign of her sexual viability in the afterlife. Felines, however, were more commonly associated with bountiful prosperity (cats producing kittens in litters) and protection, not sexuality. After all, if the ancient Egyptians wished to make a statement about sex and sexuality, they had no taboos preventing them from doing so. As for Bast as the "Goddess of Lesbians" in antiquity, it's a lie.

Myth: Bast and Sekhmet as Creator Gods Other myths include one in which Bast and Sekhmet create the world together. Bast goddess - Academic Kids. Bastet. Photograph of an alabaster cosmetic jar topped with a lioness, representing Bast, an 18th dynasty burial artifact from the tomb of Tutankhamun circa 1323 BC - Cairo Museum.