The Cults of the Greek States - Lewis Richard Farnell, Farnell Lewis Richard. City of Poseidon. A muddy dig in the Corinthian coastal plain yields the remains of an ancient Greek city swallowed by the sea. 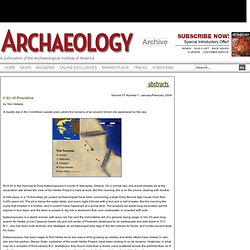 It's 8:30 in the morning at Dora Katsonopoulou's house in Nikolaiika, Greece. On a normal day, she would already be at the excavation site where the crew of her Helike Project is hard at work. But this morning she is on the phone, dealing with trouble. A mile away, in a 15-foot-deep pit, project archaeologists have been uncovering a large Early Bronze Age house more than 4,000 years old. The pit is below the water table, and every night it floods with a foot and a half of water. Katsonopoulou is a stylish woman with wavy red hair and the indomitable will of a general laying siege. Katsonopoulou has been eager to find Helike since she was a child growing up nearby, and while others have looked in vain, she and her partner, Steven Soter, codirector of the small Helike Project, have been closing in on its remains.

Further Reading Tom Gidwitz is a contributing editor to ARCHAEOLOGY. CULT OF POSEIDON 1 : Ancient Greek religion. POSEIDON was the god of the sea, the sources of fresh water, horses and earthquakes. 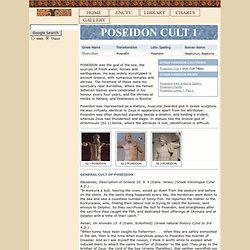 He was widely worshipped in ancient Greece, with numerous temples and shrines. The foremost of these were his sanctuary near Korinthos, where the famed Isthmian Games were celebrated in his honour every four years, and the shrines at Helike in Akhaia, and Onkhestos in Boiotia. Poseidon was represented as a mature, muscular bearded god in Greek sculpture. He was virtually identical to Zeus in appearance apart from his attributes: Poseidon was often depicted standing beside a dolphin, and holding a trident, whereas Zeus had thunderbolt and eagle. In statues like the bronze god of Artemisium (S2.1) below, where the attribute is lost, identification is difficult.

Pausanias, Description of Greece 10. 9. 4 (trans. Aelian, On Animals 15. 6 (trans. I) ATHENS Chief City of Attika Strabo, Geography 9. 1. 16 (trans. Poseidon. There is a Homeric hymn to Poseidon, who was the protector of many Hellenic cities, although he lost the contest for Athens to Athena. 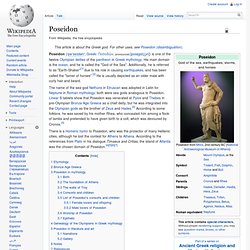 According to the references from Plato in his dialogue Timaeus and Critias, the island of Atlantis was the chosen domain of Poseidon.[4][5][6][7] Etymology The earliest attested occurrence of the name, written in Linear B, is 𐀡𐀮𐀆𐀃 Po-se-da-o or 𐀡𐀮𐀆𐀺𐀚 Po-se-da-wo-ne, which correspond to Poseidaōn and Poseidawonos in Mycenean Greek; in Homeric Greek it appears as Ποσειδάων (Poseidaōn); in Aeolic as Ποτειδάων (Poteidaōn); and in Doric as Ποτειδάν (Poteidan), Ποτειδάων (Poteidaōn), and Ποτειδᾶς (Poteidas).[8] A common epithet of Poseidon is Γαιήοχος Gaiēochos, "Earth-shaker," an epithet which is also identified in Linear B tablets. Another attested word 𐀁𐀚𐀯𐀅𐀃𐀚, E-ne-si-da-o-ne,[9][10] recalls his later epithets Ennosidas and Ennosigaios indicating the chthonic nature of Poseidon.[11] Neptunalia.

Neptune (mythology) The etymology of Neptunus is unclear and disputed. 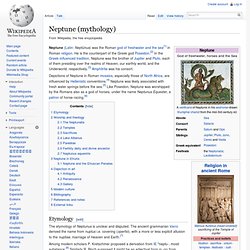 The ancient grammarian Varro derived the name from nuptus i.e. covering (opertio), with a more or less explicit allusion to the nuptiae, marriage of Heaven and Earth.[7] Among modern scholars P. Kretschmer proposed a derivation from IE *neptu-, moist substance.[8] Similarly R. Bloch supposed it might be an adjectival form in -no from *nuptu-, meaning "he who is moist".[9] Dumézil though remarked words deriving from root *nep- are not attested in IE languages other than Vedic and Avestan. He proposed an etymology that brings together Neptunus with Vedic and Avestan theonyms Apam Napat, Apam Napá and Old Irish theonym Nechtan, all meaning descendant of the waters. More recently, in his lectures delivered on various occasions in the late years of the last century, German scholar H. Mosaic of Neptune (Museo archeologico nazionale, Palermo)