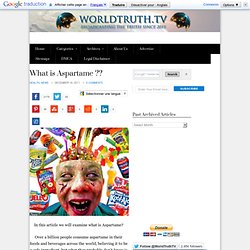 The Shocking Story of How Aspartame Became Legal. It all starts in the mid 1960′s with a company called G.D. 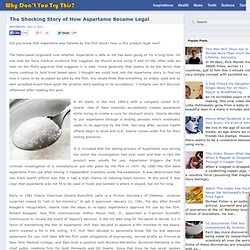 Searle. The Shocking Story of How Aspartame Became Legal. Image credit: rawforbeauty.com Timeline December 1965– While working on an ulcer drug, James Schlatter, a chemist at G.D. 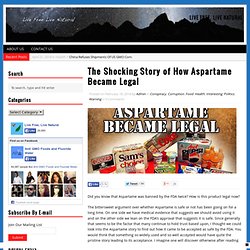 Searle, accidentally discovers aspartame, a substance that is 180 times sweeter than sugar yet has no calories. Spring 1967– Searle begins the safety tests on aspartame that are necessary for applying for FDA approval of food additives. Fall 1967– Dr. November 1970– Cyclamate, the reigning low-calorie artificial sweetener — is pulled off the market after some scientists associate it with cancer. December 18, 1970– Searle Company executives lay out a “Food and Drug Sweetener Strategy’ that they feel will put the FDA into a positive frame of mind about aspartame. Aspartame Sweet Misery, A Poisoned World - FULL LENGTH. Sweet Misery – A Poisoned World. Aspartame - Rumsfeld's Bioweapon Legacy. America's Deadliest Sweetener Betrays Millions, Then Hoodwinks You With Name Change  Aspartame is the most controversial food additive in history, and its approval for use in food was the most contested in FDA history. 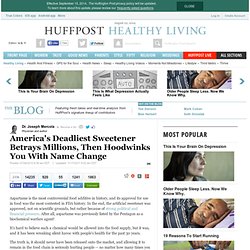 In the end, the artificial sweetener was approved, not on scientific grounds, but rather because of strong political and financial pressure. After all, aspartame was previously listed by the Pentagon as a biochemical warfare agent! It's hard to believe such a chemical would be allowed into the food supply, but it was, and it has been wreaking silent havoc with people's health for the past 30 years. The truth is, it should never have been released onto the market, and allowing it to remain in the food chain is seriously hurting people -- no matter how many times you rebrand it under fancy new names. The Deceptive Marketing of Aspartame This is deception at its finest: begin with a shred of truth, and then spin it to fit your own agenda. The Top 10 Worst Sources of Aspartame by The Health Ranger - NaturalNews.com. Diet soda, aspartame linked to premature deaths in women. (NaturalNews) A decade-long study of 60,000 women has confirmed that drinking diet soda sweetened with aspartame is linked with a 30 percent increase in heart attack risk and a 50 percent increase in death risk. 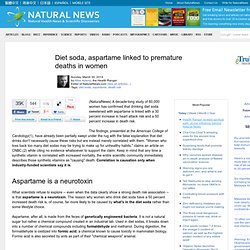 The findings, presented at the American College of Cardiology(1), have already been partially swept under the rug with the false explanation that diet drinks don't necessarily cause these risks but are instead merely correlated with them. "Women who toss back too many diet sodas may be trying to make up for unhealthy habits," claims an article on CNBC,(2) while citing no evidence whatsoever to support the claim. Keep in mind that any time a synthetic vitamin is correlated with increased mortality, the entire scientific community immediately describes those synthetic vitamins as "causing" death.

Correlation is causation only when industry-funded scientists say it is. Aspartame: Approved In 90 Nations, But Damages Brain. Sayer Ji, ContributorActivist Post A new study on aspartame has the potential to reignite the decades-old controversy behind this artificial sweetener's safety, or lack thereof. 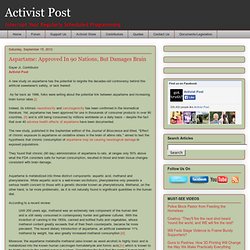 As far back as 1996, folks were writing about the potential link between aspartame and increasing brain tumor rates. [i] Indeed, its intrinsic neurotoxicity and carcinogenicity has been confirmed in the biomedical literature. Direct and indirect cellular effects of aspa... [Eur J Clin Nutr. 2008. Www.relfe.com/2010/aspartame_ant_cockroach_poison.html. See What Ants Do To Aspartame Using Aspartame for Ant & Cockroach Poison by Stephanie Relfe B.Sc. 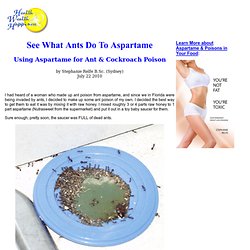 (Sydney) July 22 2010 I had heard of a woman who made up ant poison from aspartame, and since we in Florida were being invaded by ants, I decided to make up some ant poison of my own. I decided the best way to get them to eat it was by mixing it with raw honey. Sure enough, pretty soon, the saucer was FULL of dead ants.

Picture Copyright © Stephanie Relfe 2010 Permission is granted to use this picture only if you mention and link to www.Relfe.com Later on, I put a small amount straight onto the floor. The Aspartame Trap: You May Be Unknowingly Ingesting this Toxic Sweetener. Tell the FDA to Reject More Aspartame in Milk! Right now, in the midst of a major childhood obesity epidemic, the giant dairy lobby is trying to force the federal government to redefine “milk” to include artificial sweeteners such as aspartame in children’s school lunches without proper labels.

"Among the many ironies of our modern world is that Gerald Ford awarded the Presidential Medal of Freedom-America,s highest civilian honor-to Defense Secretary Donald Rumsfeld on January 19, 1977. Just a few weeks later on March 8, Rumsfeld became the CEO of G.D. Searle to take point on a mission to force the Food and Drug Administration to approve for human consumption a known carcinogen and neurotoxic poison. Mission accomplished: Today some 9,000 commonly consumed products are laced with this weapon of mass misery and millions of people live with chronic illnesses linked to the artificial sweetener aspartame. It is our belief at The Idaho Observer that if some guy named Parkinson can have a disease named after him, then Donald Rumsfeld ought to have his own disease, too. Hence the term Rumsfeld disease A." – aroman

So instead of chocolate or strawberry milk with sugar, high fructose corn syrup or some natural sweetener, Big Dairy now wants to replace that with aspartame in our children’s milk and pretend it’s a healthy choice for you and America’s children and keep this all a secret by not requiring proper labels! 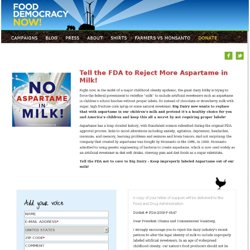 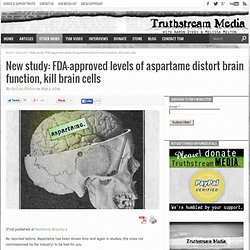 As reported before, Aspartame has been shown time and again in studies (the ones not commissioned by the industry) to be bad for you. Now yet another new study, this one published in the journal Redox Biology, has concluded what lots of other research over the past decades has shown time and again — aspartame, the popular sweetener in over 6,000 grocery store items, including everything from soup mixes to carbonated beverages to chewing gum — can essentially program your brain cells to kill themselves. Key study findings include: Aspartame administration alters the functional activity in the brain by elevating the antioxidant levels.Chronic aspartame consumption altered the neuronal function and neurodegeneration in brain.Observed changes may be due to the methanol or its metabolite.Long-term FDA approved daily acceptable intake (40 mg/kg bwt) aspartame administration distorted the brain function and generated apoptosis in brain regions. Dr. Aspartame is Dangerous! Why Did the FDA Approve it?

Interviewer: Gwen, you've done a lot of research on a bunch of different topics. 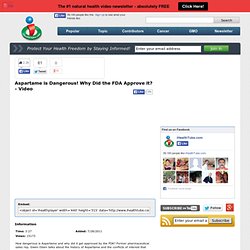 One of the things you talked to me earlier about was aspartame, one of your favorite topics I can tell already. Can you talk about that a little bit and I'm sure it's consumed by a vast majority of people in this country. Peer Reviewed aspartame studies. Studies of aspartame in the peer reviewed medical literature were surveyed for funding source and study outcome. Of the 166 studies felt to have relevance for questions of human safety, 74 had Nutrasweet® industry related funding and 92 were independently funded. One hundred percent of the industry funded research attested to aspartame's safety, whereas 92% of the independently funded research identified a problem.

A bibliography supplied by the Nutrasweet® Company included many studies of questionable validity and relevance, with multiple instances of the same study being cited up to 6 times. Questions are raised both about aspartame's safety and the broader issue of the appropriateness of industry sponsorship of medical research. Aspartame is, by far, the most dangerous substance on the market that is added to foods. Aspartame is the technical name for the brand names NutraSweet, Equal, Spoonful, and Equal-Measure. It was discovered by accident in 1965 when James Schlatter, a chemist of G.D.

Searle Company, was testing an anti-ulcer drug. Aspartame Dangers and Side Effects. Aspartame's threat to the unborn. ASPARTAME. Donald Rumsfeld confronted on Aspartame and Iraq War. NutraSweet (Aspartame): General Info. Aspartame: 92 Symptoms listed by the FDA - including Death! FDA Lists 92 Symptoms from Nutrasweet (Aspartame) (including Death!) Please Note: Nutrasweet is in Diet Coke and Diet Pepsi Update: Aspartame - NutraSweet - Is now called AminoSweet Article courtesy of: Mark Gold mgold@tiac.net (researcher for twenty years on such subjects) This article originally appeared on www.dorway.com Note: This information required a Freedom Of Information Act request to pry it from the reluctant hands of the FDA.

FDA LIST OF 92 SYMPTOMS ON ASPARTAME (NUTRASWEET/EQUAL/SPOONFUL, E951, CANDEREL, ETC.) By Dr. Betty Martini Mission Possible International 9270 River Club Parkway Duluth, Georgia 30097 Telephone: 770-242-2599 E-Mail: BettyM19@mindspring.com Web Site: Posted: 16 April 2007 As many may know, aspartame is on the market illegally. It's adulterated as discussed by the National Soft Drink Assn (now American Beverage) and in the congressional record. Because you cannot ship an adulterated product for sale it, therefore, violates Interstate Commerce. New Study: FDA-Approved Levels of Aspartame Distort Brain Function, Kill Brain Cells. As reported before, aspartame has been shown time and again in studies (the ones not commissioned by the industry) to be bad for you. Apartame Damages The Brain At Any Dose.

Aspartame & Aspartame Poisoning Information Site. Aspartame controversy. The artificial sweetener aspartame has been the subject of several controversies since its initial approval by the U.S. Food and Drug Administration (FDA) in 1974. The FDA approval of aspartame was highly contested,[1] with critics alleging that the quality of the initial research supporting its safety was inadequate and flawed and that conflicts of interest marred the 1981 approval of aspartame.[2][3][4] In 1987, the U.S. Art04. Sweet Poison? Confession: I was a junkie. I do confess…I was a diet soda and aspartame junkie. Aspartame Free Sweetener Webpages From Industrial Manufacturers, Distributers, Suppliers And OEMs. List of Products Containing Aspartame. List of all products containing fluoride and aspartame.... Domino, Thanks for the post about flouride products. Aspartame Poisoning Information Canada. Nutrasweet vs sugar. List of Aspartame Products [Archive]

Yogurt: FDA Plays Hide the Poison By Dr. Betty Martini, D.Hum. Posted at March 11, 2009. Aspartame To Be Added To Following Foods (Codex!) ASPARTAME - THE SILENT KILLER. Aspartame Symptoms Submitted to the FDA - Dr. Janet Starr Hull. Aspartame Dangers Revealed! DORway » Aspartame & Aspartame Poisoning Information Site. Www.dorway.com/betty/brainc.txt. Aspartame Side Effects. According to Lendon Smith, M.D. there is an enormous population suffering from side effects associated with aspartame, yet have no idea why drugs, supplements and herbs don’t relieve their symptoms. Aspartame is, By Far, The Most Dangerous Substance on The Market That is Added to Foods. Aspartame is Made of GMO Bacteria Feces: Infowars Nightly News 2/2.