The socio-economic foundations of Bahrain’s political crisis. The West is helping to crush the Bahrain Spring. Can you guess the country? 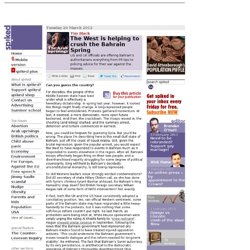 For decades, the people of this Middle Eastern state have lived under what is effectively a hereditary dictatorship. In spring last year, however, it looked like things might finally change. A long-repressed people began to feel emboldened. Protests gathered momentum. At last, it seemed, a more democratic, more open future beckoned. Now, you could be forgiven for guessing Syria. So did Western leaders issue strongly worded condemnations? Bahraini activist serving life sentence writes letter from prison. By Sara Yasin / 13 February, 2012 Prominent Bahraini human rights defender Abdulhadi Al-Khawaja has been serving a life sentence since April 2011 for his involvement in anti-government protests last year. 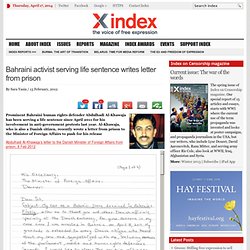 Al-Khawaja, who is also a Danish citizen, recently wrote a letter from prison to the Minister of Foreign Affairs to push for his release. Press Release: Activists Refute Bahrain Government Claim of Reform Implementation. Bahrain's Revolutionaries Speak: An Exclusive Interview with Bahrain's Coalition of February 14th Youth. In spite of claims that Bahrain’s revolution has failed, the reality is that peaceful protests, a campaign of civil disobedience, and anti-Al Khalifa energy is at an all-time high. 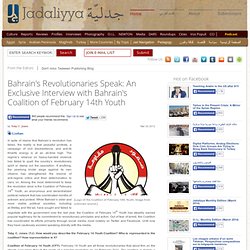 The regime’s reliance on heavy-handed violence has failed to quell the country’s revolutionary spirit or stamp out the opposition. If anything, the yearlong brutal siege against its own citizens has strengthened the resolve of anti-regime critics and their determination to carry on. Among the most determined to keep the revolution alive is the Coalition of February 14th Youth, an anonymous and decentralized political network that has coordinated months of activism and protest. While Bahrain’s older and more visible political societies, including al-Wefaq and Wa’ad, have sought and failed to negotiate with the government over the last year, the Coalition of February 14th Youth has steadily earned popular legitimacy for its commitment to revolutionary principles and action. Toby C. ٥) ما هي مطالب الائتلاف؟ 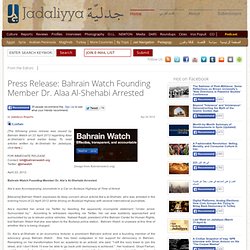 To read articles written by Al-Shehabi for Jadaliyya, click here.] FOR IMMEDIATE RELEASE Contact: bill@bahrainwatch.orgTwitter: @bhwatch April 22, 2012 Bahrain Watch Founding Member Dr. Ala'a Al-Shehabi Arrested Ala’a was Accompanying Journalists in a Car on Budaiya Highway at Time of Arrest [Manama] Bahrain Watch expresses its deep concern about activist Ala’a al-Shehabi, who was arrested in the evening hours of 22 April 2012 while driving on Budaiya Highway with several international journalists. Ala’a reported her arrest via Twitter by tweeting the apparently incomplete statement “Under arrest. Dr. Bahrain Center for Human Rights Report on Human Rights Violations Since the BICI Report. How Long Can Bahrain's Opposition Hold Out for Dialogue? MANAMA, Bahrain—Fourteen months after the Arab Spring hit the shores of Bahrain, revolution has at least two major hubs. 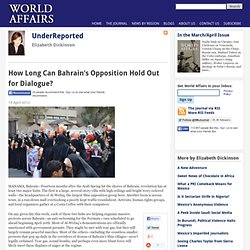 The first is a large, several-story villa with high ceilings and bright ivory-colored walls—the headquarters of Al-Wefaq, the largest Shia opposition group here. Another locus is across town, in a run-down mall overlooking a poorly kept traffic roundabout. Activists, human rights groups, and local organizers gather at a Costa Coffee with their computers. On any given day this week, each of these two hubs are helping organize massive protests across Bahrain—an anti-welcoming for the Formula 1 race scheduled to go ahead beginning April 20th.

Most of Al-Wefaq’s demonstrations are officially sanctioned with government permits. The difference between these two group’s protests has grown increasingly emblematic of their response to Bahrain’s crisis overall. Index condemns the arrest of prominent rights activist Nabeel Rajab. May 6, 2012 by Sara Yasin Index on Censorship condemns last night’s arrest of Index’s 2012 Award winner and head of the Bahrain Center for Human Rights (BCHR), Nabeel Rajab and the ongoing harassment of human rights activists in Bahrain including the arrest of those involved in peaceful protests. 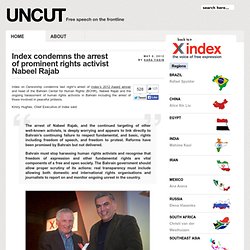 Kirsty Hughes, Chief Executive of Index said: The arrest of Nabeel Rajab, and the continued targeting of other well-known activists, is deeply worrying and appears to link directly to Bahrain’s continuing failure to respect fundamental, and basic, rights including freedom of speech, and freedom to protest. Reforms have been promised by Bahrain but not delivered.Bahrain must stop harassing human rights activists and recognise that freedom of expression and other fundamental rights are vital components of a free and open society.

Tortured Justice - By Brian Dooley. MANAMA, Bahrain – In a house at the end of a maze of narrow streets, I sat listening to a dozen young men as they described their close encounters with the full force of Bahrain's government crackdown. 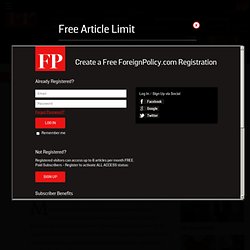 We were in one of the poor, Shiite villages scattered across the country, which have remained hotbeds for revolt despite the government's persistent attempts to suppress the uprising that began last year. The boys wore an assortment of soccer shirts, and those awful rat-tail haircuts teenage boys all over the world think look cool. They said they had been severely beaten by the police in the previous two days. "They beat us until they got tired, then other policemen would take over and beat us more," said one boy.

For all of the Bahraini government's efforts to show progress on human rights in response to the inquiry it commissioned last year, not much seems to have changed in places like this. Meanwhile, the police are using tear gas canisters as weapons. AFP/Getty Images. Abdulhadi al-Khawaja and Bahrain's Political Prisoners. There are currently an estimated six hundred political prisoners in Bahrain, as a result of the regime's ruthless retaliation against a popular uprising that started in February 2011. 397 citizens are thought to be currently serving sentences delivered by military and civilian courts that fall far short of international standards for fair trials. On Saturday, 7 April 2012, one of these prisoners was transferred to a prison clinic after allegedly losing twenty-five percent of his body weight as the result of a hunger strike begun on 8 February 2012.

Fifty-one-year-old human rights defender Abdulhadi al-Khawaja has reportedly said: "My hunger strike is a part of my human rights defense inside jail. It's very important to focus on all detainees as I'm just a part of them. I will continue with my hunger strike until I reach my demands despite the consequences. I'm aware that freedom is expensive and we must sacrifice to gain it. " Free Abdulhadi Al Khawaja. Abdulhadi Al Khawaja, the 51-year-old co-founder of the Bahrain Centre for Human Rights, reaches his 78th day of a hunger strike today, just as world media attention turns away from the island after the Grand Prix. 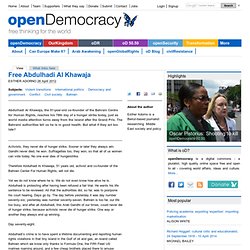 The Bahraini authorities tell us he is in good health. But what if they act too late? Activists, they never die of hunger strike. Sooner or later they always win. Gandhi never died, he won. A Family Under Siege: The Khawajas in Bahrain. How the Media Failed Abdulhadi. Since the start of the Arab Spring, which has led to many new seasons of protest in turn, the media has often gravitated to individual activists who have become leading figures in mobilizing the public during these revolutions. 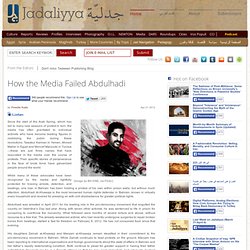 Tawakul Karman in Yemen, Ahmed Maher in Egypt and Moncef Marzouki in Tunisia—these are just three names that have resonated in the media over the course of protests. Their specific stories of perseverance in the face of brute force have galvanized people around the world. Prison Island - By Tom Malinowski. MANAMA, Bahrain — When the boys at the head of the column bolted, so did we. 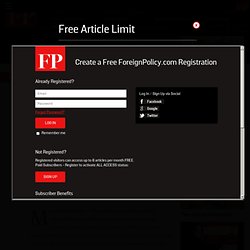 A colleague and I had been observing their nighttime march through Diraz, an older, poorer suburb of Bahrain's capital mostly populated by members of the country's Shiite majority. Teenagers and young men walked in front, women in black chadors behind them, chanting "down with Hamad" -- Bahrain's king. The protest was intended as a rebuke to the Formula One auto race Bahrain's ruling family was about to stage in late April to show the world that all was well in the Gulf kingdom after a ruthless crackdown on dissent and more than a year of unrest. We watched as the youth of Diraz peacefully made their way toward a main road. The riot police waited for them there. So we sprinted away with the scattered marchers down one darkened alley, then another.

At the police station, we waited as they verified our permission to be in the country. Two days later, we met Maj. Formula One: why we’re watching Bahrain for all the wrong reasons. By Kristian Ulrichsen / 8 March, 2012. Bahrain: What You Won't See at F1. Just 10 days before car racing's biggest event, the Formula One race (F1), is scheduled to hit Bahrain, serious questions are emerging about whether the country can or should host the sporting event. The imperial narcissism of the F1 boycotters. There have been some people willing to forego the hyperbole. Bahraini villagers fear effects of tear gas - Features. Ma'ameer, Bahrain - Shoqqi Abdulnabi's daughter, Zainab, was born three months premature; she was healthy but frail when he brought her home in March of last year to this village, a cheerless warren of concrete buildings in an industrial area just outside of Sitra.

Weeks later, she was blind. The village, like so many others in Bahrain, has become a flashpoint for clashes between riot police and angry protesters, signs of which were evident on a visit earlier this month. Battle for Bahrain: What One Uprising Meant for the Gulf States and Iran. After the popular uprisings that struck in Tunisia, Egypt, Libya, Bahrain, Yemen, and Syria, the surviving Middle East monarchies have come under heavy criticism in the West. Many believe it is only a matter of time until they are next. Adam Curtis Blog: IF YOU TAKE MY ADVICE - I'D REPRESS THEM.