As education keeps changing with the implementation of technology so is the learning approach. There are many options that can help students achieve their full potential even in Emergency Remote. 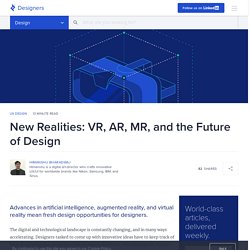 The digital and technological landscape is constantly changing, and in many ways accelerating. Designers tasked to come up with innovative ideas have to keep track of what is trending and where the creative opportunities are. Recognizing the changes that are occurring in the industry will help designers design smarter and make more informed creative decisions. In the technology adoption life cycle, “Innovators” are the smallest group, yet the most successful. They are followed by “Early Adopters,” then “Early Majority,” and later, “The Majority,” or everyone else. Let’s look at some creative opportunities and emerging technologies and why, in order to design the future, designers need to think beyond the screen into new realities.

Augmented Reality In Education? Here Are 20 Examples. Augmented reality is exactly what the name implies — a medium through which the known world fuses with current technology to create a uniquely blended interactive experience. 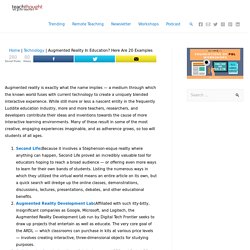 While still more or less a nascent entity in the frequently Luddite education industry, more and more teachers, researchers, and developers contribute their ideas and inventions towards the cause of more interactive learning environments. Many of these result in some of the most creative, engaging experiences imaginable, and as adherence grows, so too will students of all ages. Second Life:Because it involves a Stephenson-esque reality where anything can happen, Second Life proved an incredibly valuable tool for educators hoping to reach a broad audience — or offering even more ways to learn for their own bands of students. How Augmented Reality Will Change Education Completely. VR , AR, & MR in Education. Virtual Reality, Augmented Reality, and… Virtual Reality, Augmented Reality, and Mixed Reality are all changing the way we experience reality. 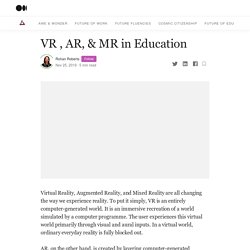 To put it simply, VR is an entirely computer-generated world. It is an immersive recreation of a world simulated by a computer programme. The user experiences this virtual world primarily through visual and aural inputs. VR, AR, MR: Which one is Better? These days, new and evolving technology has introduced the world to 3 very fascinating realities, Virtual Reality or VR, Augmented Reality or AR, and Mixed Reality or MR. in this article, you will see what makes them different from each other and how they are contributing in different areas of work. 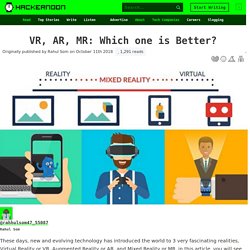 Let’s have a brief look at what is VR, AR, and MR ● VR — With VR app development, it engages users in a completely artificial digital setting. ● AR — It covers virtual objects on the real-world setting. ● MR — It covers and keeps the virtual objects anchored to the real world. Virtual Reality or VR Virtual Reality (VR) is also called a computer-simulated reality which delivers an immersive experience. 1. 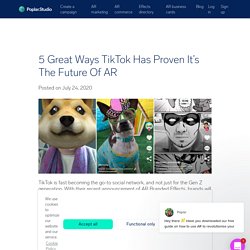 With their recent announcement of AR Branded Effects, brands will finally be able to publish AR effects that allow users to take their videos to the next level, encourage word-of-mouth sharing and increase brand engagement. With this new offering, TikTok are now head-to-head with Snapchat’s Sponsored Lenses and Instagram’s AR filters. However, TikTok’s innovative use of AR is offering brands the potential to build advertising campaigns that go above and beyond what’s currently possible on other platforms. What’s the deal with TikTok? So what makes TikTok so unique? Another great thing about TikTok is their call-to-action (CTA) functions, which include in-camera, in-video and scanned QR code options.

A great example of how brands are taking advantage of TikTok’s offering is the Hashtag Challenge. 1. 2. The Past, Present, Future of Virtual & Augmented Reality. What’s the Difference Between AR, VR, and MR? Augmented reality (AR) adds digital elements to a live view often by using the camera on a smartphone. 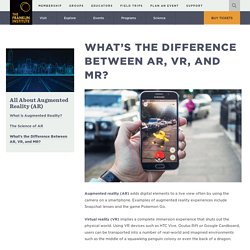 Examples of augmented reality experiences include Snapchat lenses and the game Pokemon Go. Virtual reality (VR) implies a complete immersion experience that shuts out the physical world. Using VR devices such as HTC Vive, Oculus Rift or Google Cardboard, users can be transported into a number of real-world and imagined environments such as the middle of a squawking penguin colony or even the back of a dragon. Introducing Microsoft Mesh. Virtual Reality: Low-Cost Tools and Resources for the Classroom, TechTrends.