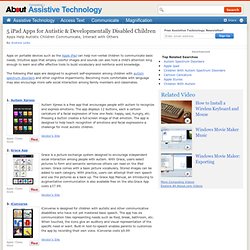 Grace is a picture exchange system designed to encourage independent social interaction among people with autism. 3. iConverse iConverse is designed for children with autistic and other communicative disabilities who have not yet mastered basic speech. 4. ADHD. Autism. Family Autism Expert in Advocacy, Raw Food Diet and Gluten Free, All kids - your kids - have Smart Pot. Response to Intervention in Primary Grade Reading. By: What Works Clearinghouse, U.S. 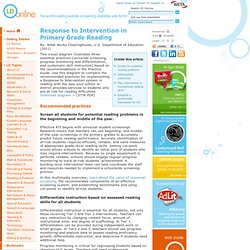 Department of Education (2011) This visual diagram illustrates three essential practices (universal screening, progress monitoring and differentiation, and systematic skill instruction) based on the recommendations in the Practice Guide. Use this diagram to compare the recommended practices for implementing a Response to Intervention system in reading with the way your school or district provides services to students who are at risk for reading difficulties.Download diagram > (577K PDF) Screen all students for potential reading problems in the beginning and middle of the year. Effective RTI begins with universal student screenings. In this multimedia overview, learn about the value of universal screening, the recommended components of an effective screening system, and establishing benchmarks and using cut-points to identify at-risk students.

S-O-S Research Helping Your Child. Classroom. Classroom. Ipad Apps. iPads in the Classroom. 阅读、发现和分享：8小时外的健康生活！ The Mac-cessibility Network – News [Lioncourt.com] As is our custom at Mac-cessibility, we won’t be covering the more general enhancements and additions to the iOS operating system which powers Apple’s mobile devices in this review. 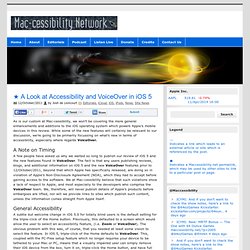 While some of the new features will certainly be relevant to our discussion, we’re going to be primarily focussing on what’s new in terms of accessibility, especially where regards VoiceOver. A Note on Timing A few people have asked us why we waited so long to publish our review of iOS 5 and the new features found in VoiceOver. The fact is that any users publishing reviews, blogs, and additional information on iOS 5 and the new VoiceOver features prior to 12/October/2011, beyond that which Apple has specifically released, are doing so in violation of Apple’s Non-Disclosure Agreement (NDA), which they had to accept before gaining access to the software. We at Mac-cessibility believe that such violations show a lack of respect to Apple, and most especially to the developers who comprise the VoiceOver team.

Apps for Special Education. iPad Apps for Kids with Special Needs. Hands On Letters and Numbers with Doodle Buddy. When I first began learning to write my letters and numbers, I must have gone through an entire tree worth of paper as I practiced tracing and then writing them on my own. 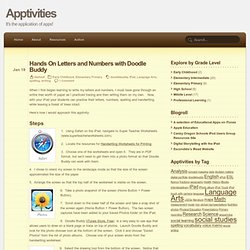 Now, with your iPad your students can practice their letters, numbers, spelling and handwriting while leaving a forest of trees intact. Here’s how I would approach this apptivity: Safari 1. Using Safari on the iPad, navigate to Super Teacher Worksheets (www.superteacherworksheets.com). 2. 3. 4. 5. Photos. Accessible Technology Tips {AT tips} - clean & simple accessible technology tips for all. Actividad reciente. Education - Special Education. My Library. Educational iPad Apps - A4CWSN.com. iPod Touch/iPhone App Round Up for Users with Significant Disabilities and Those who Teach Them. Updated June 19, 2010 Please note YGWYPF notation means "You get what you pay for! 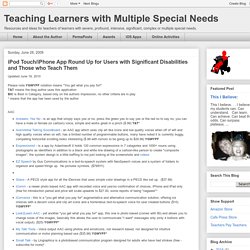 "T&T means the blog author uses this applicationBIC is Best in Category, based only on the authors impression, no other criteria are in play * means that the app has been used by the author.