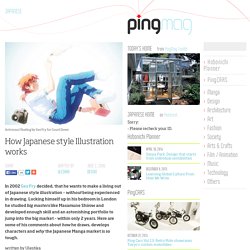 Locking himself up in his bedroom in London he studied big masters like Masamune Shirow and developed enough skill and an astonishing portfolio to jump into the big market – within only 2 years. Here are some of his comments about how he draws, develops characters and why the Japanese Manga market is so tough. written by Uleshka. Hottest Anime News & Rumors. Nihonomaru - Friendly Yet Wild. Anime-Sharing. Bleach Filler List - Naruto Forums. Forums -> Your Guide To Yandere Love. When obsession wins over love and you've got yourself an immensely affectionate stalker instead of a girlfriend, you have a yandere on your hands. 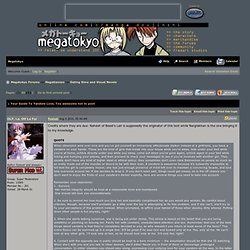 These are the kind of girls that break into your house while you're away, hide under your bed while you're at home, schlick directly under you while you sleep, come out when you're gone again, schlick again in your bed while licking and humping your pillows, and then proceed to check your messages to see if you're involved with another girl. They usually don't have any kind of higher ideal or ethical policy; they sometimes don't even view themselves as people so much as an entity made out of the impulse or desire to be with their man. A yandere is awesome because it's outwardly impossible to tell that the girl is completely insane; she has just enough presence of mind left over to maintain a convincing facade, and God help everyone around her if she decides to drop it. 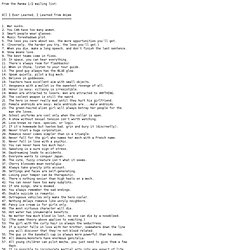 War sucks. 2. You CAN have too many women. 3. Smart people wear glasses. 4. Www.mit.edu/~rei/manga-translations.html. Last night I was watching "Trigun" DVDs that I'd borrowed from a coworker, and marveling at the terrible quality of the English subtitles. 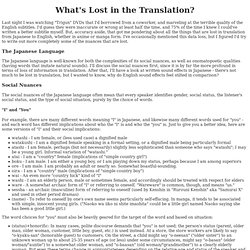 I'd guess they were inaccurate or wrong at least half the time, and 75% of the time I knew I could've written a better subtitle myself. But, accuracy aside, that got me pondering about all the things that are lost in translation from Japanese to English, whether in anime or manga form. 100 Most Essential Words In Anime. A couple of years ago when I first started to read manga in Japanese, I really wish I had access to a list like this. 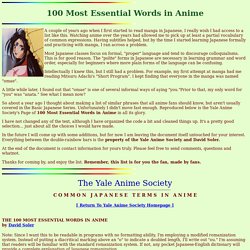 Watching anime over the years had allowed me to pick up at least a partial vocabulary of common expressions. Having subtitles helped, but by the time I started learning Japanese formally and practicing with manga, I ran across a problem. Most Japanese classes focus on formal, "proper" language and tend to discourage colloquialisms. This is for good reason. Akaikokoro/jap.html. The World of Urusei Yatsura's Lum - The Anime Laws. The Laws of Anime is a growing list of physical, universal, and natural phenomenon that seem to appear in various forms in all sorts of anime. 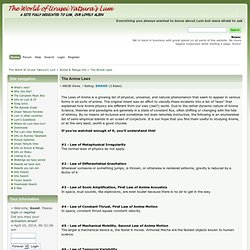 The original intent was an effort to classify these incidents into a list of "laws" that explained how Anime physics are different from our own (real?) World. Due to the rather dynamic nature of Anime Science, theories and paradigms are generally in a state of constant flux, often shifting or changing with the tide of whimsy. By no means all-inclusive and sometimes not even remotely instructive, the following is an enumerated list of semi-empirical islands in an ocean of conjecture. 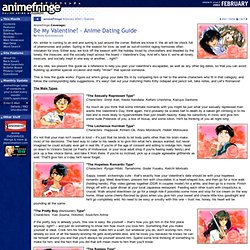 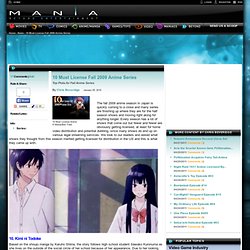 Welcome to our new home! Random Curiosity. Project Haruhi. What If Starships Were Girls? « Project Haruhi. Many of you are probably familiar with the -tan meme, which delights in portraying various inanimate products such as Windows operating systems as anime-inspired moe girls. 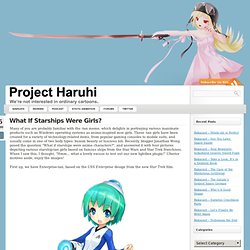 These -tan girls have been created for a variety of technology-related items, from popular gaming consoles to mobile suits, and usually come in one of two body types: buxom beauty or luscious loli. Recently, blogger Jonathan Wong posed the question "What if starships were anime characters? ", and answered it with four pictures depicting various starship-tan girls based on famous ships from the Star Wars and Star Trek franchises. When I saw this, I thought, "Hmm... what a lovely excuse to test out our new lightbox plugin! " Kyon Quotes. I only have questions about how your brain works. 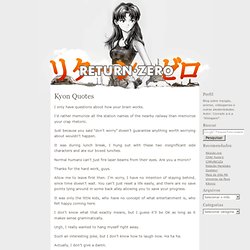 I’d rather memorize all the station names of the nearby railway than memorize your crap rhetoric. Just because you said “don’t worry” doesn’t guarantee anything worth worrying about wouldn’t happen. It was during lunch break, I hung out with these two insignificant side characters and ate our boxed lunches. Normal humans can’t just fire laser beams from their eyes. Are you a moron? BakaBT. [CXC] - Powered by Brackets - Main. Reel Anime 2010. Blue Exorcist US Official Anime Trailer and News - Aniplex. NyaaTorrents. #tokyotosho @ irc.rizon.net. AU~BETA! Episode Downloader – Download tons of free Episodes, TV Show and Anime. 200 OK. Welcome to the Frontpage - Zone-Anime - Download anything anime related. RealityLAPSE[.com]__' - Your #1 source for Anime media.

喝一碗浓茶,听一段故事. [分享]我的蓝色系壁纸 Ver1.0. Ocha! NICE BOOK – Lucky Star cameos. Anime Blog. May 26, 2012 by Hung3 Comments I was really worried that one of those rifles belonged to Chekov So when we last left the jazz kids, things were in turmoil. Anime Character Expressions: The Roundup « BasuGasuBakuhatsu Anime Blog. This is my new desktop wallpaper! To me, a lot of what makes anime unique is the facial expressions that characters use. I’m kind of a sucker for these, and any anime that (over)uses them will usually get my vote. I thought it’d be fun to use the Summer 2006 anime as a case test for these expressions. The Blush Okay, so maybe the blush isn’t so much an anime facial expression as it is an add-on.

Anime Geek: Anime, Manga, Anime Gallery, Otaku, Japan, Gadgets and Tech News. Anime: Japanese Papercraft Figures. A Product of Wasted Time. Anime Movie Guide. Movie Count: 63 Do you have feedback, questions, movie suggestions or review copy offers? You can contact us at contact@animemovieguide.com *protected email* I’ve spent more time than I care to think about watching anime movies in my life thus far. Anime Motivational Posters by Shawn Merrow. Kurogane's Anime Blog » A cat is fine too… Recently, I just discovered a fine cache of Type-Moon doujins and among them were the original “A cat is fine too..” doujin. I must say, it’s one of the funniest doujin I’ve read and I just wanted to share it with those who haven’t seen or read it before. Shiki is awesome! Shiki decides he can’t take it anymore.