Inspector Goole's Final Speech: Analysis. An Inspector Calls - trailer 2009. Watch Freedom Writers For Free On 123Movies.to. Power Lessons: "This I Believe" Essays. Reflective Essay Sample with Writing Tips. Sample Essay: Description of Experience Looking up at the sharp laughter of the gull, I caught the sea breeze on my face and smelled the tangy salt spray from the Pacific ocean. 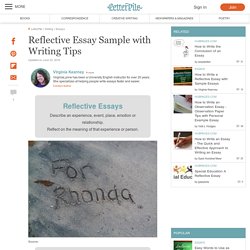 Suddenly, I felt like I was home. I took off my flip flops and stepped down into the familiar warm, smooth, white sand. Skirting the volleyball players near Lifeguard Station 37 at the beach in Carlsbad, California, I made my way down to the firmer sand near the shore. I was just there for an hour for a walk along the beach. The waves bathed my ankles as I walked along just at the edge of the water. While I love watching surfers, I've never had the urge to try it myself, but as I turned to head back, I saw something I would love to try. Looking at the sky, I realized it was time to head back. Sample Essay: Reflecting on Experience As a native of Southern California, the beach feels like home. 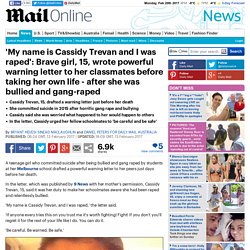 In the letter, which was published by 9 News with her mother's permission, Cassidy Trevan, 15, said it was her duty to make her schoolmates aware she had been raped and relentlessly bullied. 'My name is Cassidy Trevan, and I was raped,' the letter said. 'If anyone every tries this on you trust me it's worth fighting! Fight! If you don't you'll regret it for the rest of your life like I do. 'Be careful. Cassidy Trevan penned a powerful warning letter to her schoolmates before her suicide Cassidy drafted the letter to warn students what happened to her could happen to them Cassidy was the target of severe bulling by a group of girls at her high school and raped by two teenage boys after being led to a house in Springvale in February 2014. After two years of suffering, Cassidy committed suicide aged 15. Be careful. Michael Jackson - Man In The Mirror Lyrics. I'm gonna make a change For once in my life It's gonna feel real good Gonna make a difference Gonna make it right As I, turn up the collar on My favorite winter coat This wind is blowing my mind I see the kids in the streets With not enough to eat Who am I to be blind? 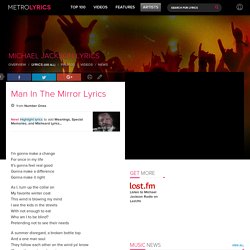 Pretending not to see their needs A summer disregard, a broken bottle top And a one man soul They follow each other on the wind ya' know 'Cause they got nowhere to go That's why I want you to know I'm starting with the man in the mirror I'm asking him to change his ways And no message could have been any clearer If you want to make the world a better place Take a look at yourself, and then make a change I've been a victim of a selfish kind of love It's time that I realize That there are some with no home, not a nickel to loan Could it be really me, pretending that they're not alone?

I'm starting with the man in the mirror (Oh yeah!) (Then you close your, mind!) Oh no, no no I'm gonna make a change It's gonna feel real good! The black eyed peas where is the love? Sly & The Family Stone - Everyday People. Phil Collins - Another Day In Paradise.