Who should police the internet? Media tools. Alternative Media. Two levels. Russia denies delivery of helicopters to Syria. Responding to claims earlier this week by US Secretary of State Hillary Clinton that Russia was delivering attack helicopters to Syria, Russia's foreign ministry said in an online statement Friday that no new deliveries were taking place. 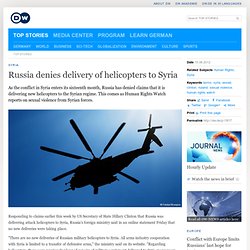 "There are no new deliveries of Russian military helicopters to Syria. All arms industry cooperation with Syria is limited to a transfer of defensive arms," the ministry said on its website. "Regarding helicopters, there were previously planned repairs of military equipment delivered to Syria many years ago. " Clinton's spokeswoman, Victoria Nuland, said on Thursday that refurbished helicopters were being sent back to Syria after undergoing repairs in Russia and that they would be used to kill civilians. Russia said that the only military supplies being sent to Syria were for defense purposes and were not "things used to fight peaceful civilians.

" Claims of sexual violence The report said the female victims in some of the home raids were as young as 12. Posta in arrivo - roberta.caruso.9989 - Gmail. Inbox (2) - barber.jp - Gmail. Following Pearlers & Pearls to curate. Shtoink. Dickk wants to join your team Tools - philgi7 - Gmail. The End Of America. Kaosenlared. Disinformation: Everything You Know Is Wrong. Falkvinge on Infopolicy - Discussions on information policy and civil liberties.

Otramérica. The best China news and blog posts as chosen by you. Danwei. ChinaHush. Get over it, haters – apps really are the future, says Wired publisher. There has been a growing revolt in the publishing community against the idea that iPhone and iPad apps are the best route to digital dollars. 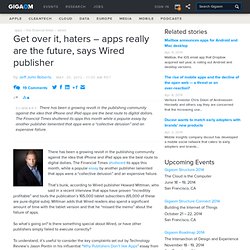 The Financial Times shuttered its apps this month, while a popular essay by another publisher lamented that apps were a “collective delusion” and an expensive failure. That’s bunk, according to Wired publisher Howard Mittman, who said in a recent interview that apps have proven “incredibly profitable” and touts the publication’s 165,000 tablet subscribers (65,000 of these are pure-digital subs). Mittman adds that Wired readers also spend a significant amount of time with the tablet version and that he “missed the memo” about the failure of apps. So what’s going on? Is there something special about Wired, or have other publishers simply failed to execute correctly? To understand, it’s useful to consider the key complaints set out by Technology Review’s Jason Pontin in his influential “Why Publishers Don’t like Apps” essay from early May, including: 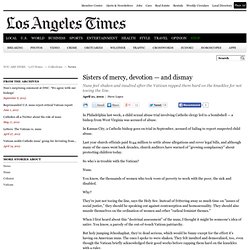 In Kansas City, a Catholic bishop goes on trial in September, accused of failing to report suspected child abuse. Last year church officials paid $144 million to settle abuse allegations and cover legal bills, and although many of the cases went back decades, church auditors have warned of "growing complacency" about protecting children today. So who's in trouble with the Vatican? Nuns. You know, the thousands of women who took vows of poverty to work with the poor, the sick and disabled. Why? They're just not toeing the line, says the Holy See. Joelle guittard - chat - philgi7. How Many Minimum-Wage Hours Does It Take to Afford a Decent Life? - News. So much of the talk surrounding the jobs crisis focuses on unemployment, but a huge portion of those who do have jobs are barely clinging to a decent lifestyle. 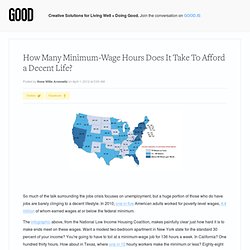 In 2010, one in five American adults worked for poverty-level wages, 4.4 million of whom earned wages at or below the federal minimum. The infographic above, from the National Low Income Housing Coalition, makes painfully clear just how hard it is to make ends meet on these wages. Want a modest two-bedroom apartment in New York state for the standard 30 percent of your income? You're going to have to toil at a minimum-wage job for 136 hours a week. Link TV. First Voices Indigenous Radio. CounterPunch. T r u t h o u t. Television for the Environment. Freedom Archives Home. Alternative Radio. Mother Jones. Common Dreams. Grist. AlterNet. Earthcasts. Intelligent thought. Microcosm Publishing.