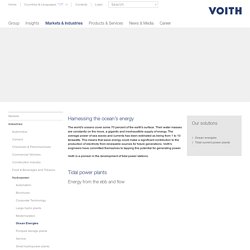 Their water masses are constantly on the move, a gigantic and inexhaustible supply of energy. The average power of sea waves and currents has been estimated as being from 1 to 10 terawatts. This means that wave energy could make a significant contribution to the production of electricity from renewable sources for future generations. Voith's engineers have committed themselves to tapping this potential for generating power. Voith is a pioneer in the development of tidal power stations. Jiaxing New Light Solar Power Technology Co.,Ltd. Ilioss. Intelligent Energy. Intelligent Energy's proprietary, high performance fuel cell platforms have been designed for high volume manufacturing in two distinct modular architectures; Air Cooled (AC) and Evaporatively Cooled (EC). 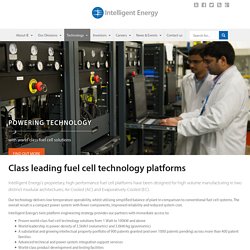 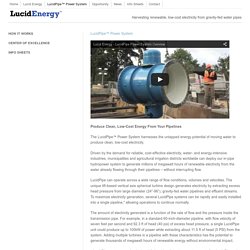 Driven by the demand for reliable, cost-effective electricity, water- and energy-intensive industries, municipalities and agricultural irrigation districts worldwide can deploy our in-pipe hydropower system to generate millions of megawatt hours of renewable electricity from the water already flowing through their pipelines – without interrupting flow. LucidPipe can operate across a wide range of flow conditions, volumes and velocities. The unique lift-based vertical axis spherical turbine design generates electricity by extracting excess head pressure from large diameter (24”-96”), gravity-fed water pipelines and effluent streams. Technology - Kepler Energy. There are three key technologies for extracting energy from tidal streams: ‘Conventional’ horizontal axis turbines; Dynamic Tidal Power (DTP), which is being developed by the leading Hydrology Institutes in China in conjunction with a Dutch consortium; and tidal fences, for which the patented Kepler turbine is the leading machine. 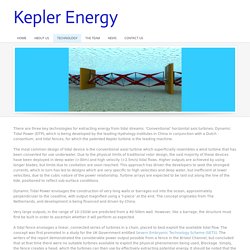 The most common design of tidal device is the conventional axial turbine which superficially resembles a wind turbine that has been converted for use underwater. Due to the physical limits of traditional rotor design, the vast majority of these devices have been deployed in deep water (>30m) and high velocity (>2.5m/s) tidal flows. Higher outputs are achieved by using longer blades, but limits due to cavitation are soon reached. The Kepler tidal turbine consists of a stressed truss configuration of carbon composite hydrofoil blades. eZelleron. Eliodomestico : gabriele diamanti. موقع أميركي يدعو الولايات المتحدة للاستفادة من ابتكارات #دبي_الذكية. EnerPlex - Packr. Powerful, Eco-Friendly Batteries That Last 1000x Longer. Port solar charger 1000mAh, grey/white. The solar charger Port will give your mobile phone energy wherever you go on the spot! 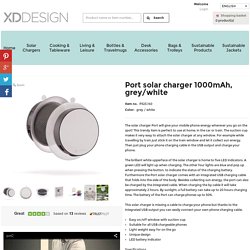 This trendy item is perfect to use at home, in the car or train. The suction cup makes it very easy to attach the solar charger at any window. For example while travelling by train just stick it on the train window and let it collect sun energy. Sunshine solar charger 2600mAh. GoSun Stove: Fast, Portable and Practical Solar Cooker. Fujisawa Sustainable Smart Town Official Site. Design Concepts. Power Tree™ – Design Concept While land constraints have not been a primary concern for solar deployment in the past, this is certain to change. 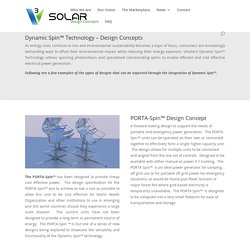 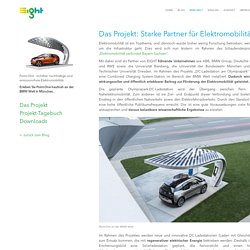 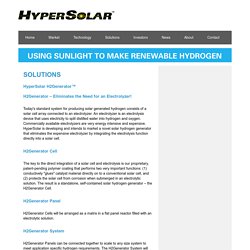 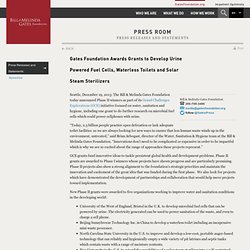 “Today, 2.5 billion people practice open defecation or lack adequate toilet facilities so we are always looking for new ways to ensure that less human waste winds up in the environment, untreated,” said Brian Arbogast, director of the Water, Sanitation & Hygiene team at the Bill & Melinda Gates Foundation. “Innovations don’t need to be complicated or expensive in order to be impactful which is why we are so excited about the range of approaches these projects represent.” GCE grants fund innovative ideas to tackle persistent global health and development problems. Phase II grants are awarded to Phase I winners whose projects have shown progress and are particularly promising. Zenith Solar. Solar thermal magazine. Flip Concentrated Solar Power Technology in Morocco ( Solar Thermal Magazine). 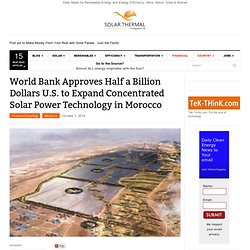 LAGI-2014. Max Fordham. Energy Floors partners with OTEM2000 to create hybrid energy floors. Energy Floors and Spanish start-up OTEM2000 are going to develop hybrid energy floors together. Using our extensive knowledge of human powered interactive floor systems and OTEM2000’s wealth of experience in Solarfloors®, a range of flooring products for the private and public sector will be created. The Hybrid Energyfloor® is the world’s first energy floor that merges two different technologies to produce local clean energy. The floor combines both human power and solar energy to generate electricity and can be installed on commercial streets, rooftops, squares, pavements, public areas or private patios. Home - The Archimedes. Technology - LightSail Energy. These Pollution-Cleaning Towers In China Will Be The Tallest Skyscrapers In The World. When the world's tallest tower is built in Wuhan, China, it will also be one of the most environmentally friendly skyscrapers anywhere.

The building, paired with another slightly shorter tower, goes beyond the usual sustainable design features to try to help restore the surrounding environment. Set on an island within a lake, the towers will help suck pollution out of both the air and water. The larger tower pulls water up from the lake, cleans it, and then puts it back. “The water goes up through a series of filters,” explains Laurie Chetwood, chairman of U.K. -based Chetwoods, the architects on the project. The towers also have pollution-absorbing coatings to help clean the air, vertical gardens that filter more pollution, and a chimney in the middle of the larger tower naturally pulls air across the lake for better ventilation.

Images will be continuously added. The parking lot is fully functional with solar cells, LED's, heating elements, and the textured glass surface. Solar Power Satellites: A Visual Introduction. Image: NASA. Of all the many spaceflight concepts NASA has studied, the most enormous was the Solar Power Satellite (SPS) fleet of the 1970s. Czech-born physicist/engineer Peter Glaser outlined the concept in a brief article in the esteemed journal Science in November 1968, and was awarded a patent for his invention on Christmas Day 1973. In October 1976, the U.S. Department of Energy (DOE) and NASA began a three-phase, four-year joint study of the SPS concept.