Bio « you found me. Jane McGonigal, PhD is a world-renowned designer of alternate reality games — or, games that are designed to improve real lives and solve real problems. 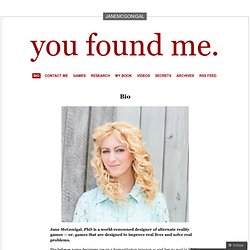 She believes game designers are on a humanitarian mission — and her #1 goal in life is to see a game developer win a Nobel Peace Prize. She is the New York Times bestselling author of Reality is Broken: Why Games Make Us Better and How They Can Change the World (Penguin Press, 2011) — and is the inventor and co-founder of SuperBetter, a game that has helped nearly half a million players tackle real-life health challenges such as depression, anxiety, chronic pain, and traumatic brain injury. She has created and deployed award-winning games, sports and secret missions in more than 30 countries on six continents, for partners such as the American Heart Association, the International Olympics Committee, the World Bank Institute, and the New York Public Library. 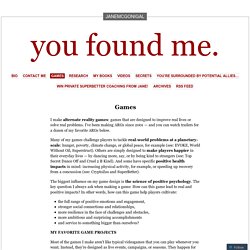 I’ve been making ARGs since 2001 — and you can watch trailers for a dozen of my favorite ARGs below. Many of my games challenge players to tackle real-world problems at a planetary-scale: hunger, poverty, climate change, or global peace, for example (see: EVOKE, World Without Oil, Superstruct). Others are simply designed to make players happier in their everyday lives — by dancing more, say, or by being kind to strangers (see: Top Secret Dance Off and Cruel 2 B Kind). And some have specific positive health impacts in mind: increasing physical activity, for example, or speeding up recovery from a concussion (see: CryptoZoo and SuperBetter). The biggest influence on my game design is the science of positive psychology. Meghatározás, elemzés. ARG history. Alternate Reality Gaming (also known as beasting, unfiction, or immersive fiction) is an interactive fusion of creative writing, puzzle-solving, and team-building, with a dose of role playing thrown in. 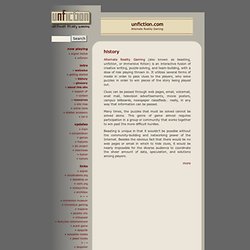 It utilizes several forms of media in order to pass clues to the players, who solve puzzles in order to win pieces of the story being played out. Clues can be passed through web pages, email, voicemail, snail mail, television advertisements, movie posters, campus billboards, newspaper classifieds… really, in any way that information can be passed. Many times, the puzzles that must be solved cannot be solved alone. This genre of game almost requires participation in a group or community that works together to win past the more difficult hurdles. Beasting is unique in that it wouldn't be possible without the community-building and networking power of the Internet.

Alternate Reality Games. ARG’s are designed experiences with a strong potential for emergent, that is to say unexpectedly complex, group play and performance. 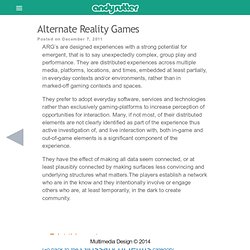 They are distributed experiences across multiple media, platforms, locations, and times, embedded at least partially, in everyday contexts and/or environments, rather than in marked-off gaming contexts and spaces. They prefer to adopt everyday software, services and technologies rather than exclusively gaming-platforms to increase perception of opportunities for interaction. Cloudmakers.org. The Guide X: A Tale of the A.I. 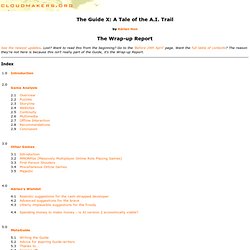 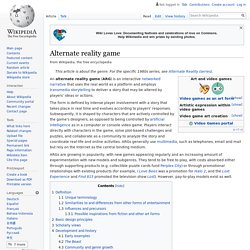 The form is defined by intense player involvement with a story that takes place in real time and evolves according to players' responses. Subsequently, it is shaped by characters that are actively controlled by the game's designers, as opposed to being controlled by artificial intelligence as in a computer or console video game. Players interact directly with characters in the game, solve plot-based challenges and puzzles, and collaborate as a community to analyze the story and coordinate real-life and online activities.

ARGs generally use multimedia, such as telephones, email and mail but rely on the Internet as the central binding medium. Definition[edit] Unique terminology[edit] Among the terms essential to understand discussions about ARGs are: Computer/console/video games. Are Alternate Reality Games the Future? In the summer of 2004, unsuspecting moviegoers in theaters across America witnessed the beginnings of a new form of interactive storytelling hidden inside the debut trailer for Bungie's Halo 2. 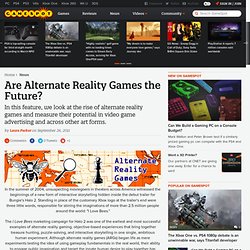 Standing in place of the customary Xbox logo at the trailer's end were three little words, responsible for stirring the imaginations of more than 2.5 million people around the world: "I Love Bees. " The I Love Bees marketing campaign for Halo 2 was one of the earliest and most successful examples of alternate reality gaming, objective-based experiences that bring together treasure hunting, puzzle-solving, and interactive storytelling in one single, ambitious human experiment. In this feature, GameSpot AU looks at the beginnings of ARGs and analyzes their potential impact on the future of the video game industry and their adoption in wider art forms. I Love Bees Bonds knows the score. But it wasn't until 2004's I Love Bees that something quite extraordinary happened. The Year in Alternate Reality Games. This article reflects on the alternate reality games of 2010, commenting on everything from buried muppet pirate treasure to a national manhunt facilitated by Wired. 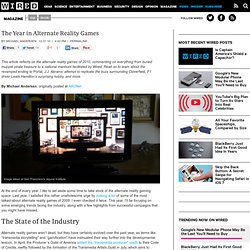 Read on to learn about the revamped ending to Portal, J.J. Abrams’ attempt to replicate the buzz surrounding Cloverfield, F1 driver Lewis Hamilton’s surprising hobby, and more. By Michael Andersen, originally posted at ARGNet Image taken at San Francisco's Jejune Institute At the end of every year, I like to set aside some time to take stock of the alternate reality gaming space. The State of the Industry. Xi (alternate reality game) The game lasted a total of 12 weeks from its release. 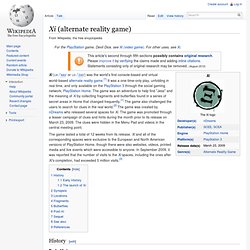 Xi and all of the corresponding spaces were exclusive to the European and North American versions of PlayStation Home, though there were also websites, videos, printed media and live events which were accessible to anyone. In September 2009, it was reported that the number of visits to the Xi spaces, including the ones after Xi's completion, had exceeded 5 million visits.[3] "Xi started at the Edinburgh Interactive Festival a couple of years ago," (from 2009) says Patrick O'Luanaigh, the founder of nDreams. "I saw a talk from Pete Edwards, who runs Home for Sony. Home seemed really exciting, and I thought it would be really cool to have an ARG – something in there to grab people’s attention and to make them want to come in.

One of the game's developers revealed that it took 18 months for nDreams to develop Xi. Reality ends here: A (trans-)media making alternate reality game for cinema students. Cloudmakers.org. Was the Portal 2 Alternate Reality Marketing Campaign Worth It? Portal 2, the brain-bending sequel to Valve Software's 2007 hit is arguably one of the most anticipated video games of the year. 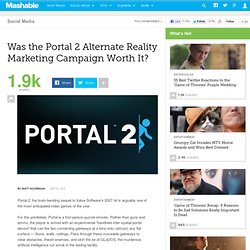 ARG Zombies - A Mobile Alternate Reality Zombie Game. by Owen Morris. Update #5 Reward Changes/Additions! $1 now gets you into the beta on your iOS or Android device! Win a keychain by voting on which one you would like to see. Vote in the comments on our facebook page- Update #4 Gameplay Preview Update #3 Two Player Productions Joins the backers!! Update #2. LOST (sorozat) ARG-k. An alternate reality game (ARG) is an interactive, cross-media narrative. Fictional elements of the narrative, often presented as real, include clues that lead players to discoveries that further the game. Five Lost ARGs have been produced as season hiatus activities for fans. The 5 Most Insane Alternate Reality Games. The game took off with a bang when, during the 2007 San Diego Comic-Con, people found "Jokerized" $1 bills that led them to whysoserious.com, a page advertising jobs for Joker henchmen.

Those eager to be repeatedly punched by costumed vigilantes and/or murdered by their own boss were instructed to be at a certain spot near the convention center at 10:00 a.m. the next day. Upon going there at the allotted time, players discovered a phone number ... written in the sky. "Don't call that, dude -- it's probably Goatse. " ARG Tools.