Speak Freely. Why is the Serval Mesh important, how does it work? 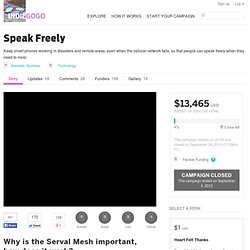 Mobile phones normally can't be used when cellular networks fail, for example during a disaster. This means that millions of vulnerable people around the world are deprived of the ability to communicate, when they need it most. We have spent the past three years working with the New Zealand Red Cross to create a solution. We call it the Serval Mesh, and it is free software that allows smart-phones to communicate, even in the face of catastrophic failure of cellular networks. It works by using your phone's Wi-Fi to form impromptu networks consisting only of mobile phones.

An experimental version of the the Serval Mesh is already available on Google Play, and allows encrypted phone calls, encrypted text messaging, as well as general purpose file sharing, e.g., to easily share maps and other information during a disaster. WiSTiCK – Wireless Sensor Networks with Arduino. Following my last post about IoT and WSN networks, i would like to introduce you a new tool for your first open source WSN. 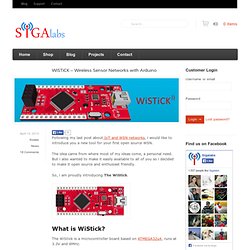 The idea came from where most of my ideas come, a personal need. But i also wanted to make it easily available to all of you so i decided to make it open source and enthusiast friendly. So, i am proudly introducing The WiStick. What is WiStick? The WiStick is a microcontroller board based on ATMEGA32u4, runs at 3.3V and 8MHz. It has 14 digital input/output pins, 6 analog inputs, a hardware serial port (UART), a USB interface, working independent from the serial port (we use this for programming and debugging purposes), mounting holes for pin headers and screws.

Flutter: $20 Wireless Arduino with half mile (1km) range. by Flutter Wireless. Flutter is a wireless electronics development platform based on Arduino. 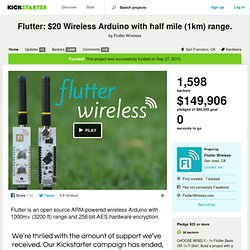 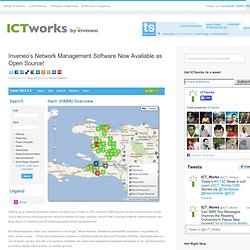 And for the most part network administrators can keep track of inventory and IP addresses with simple spreadsheets. But what happens when your network is a bit larger? More devices, additional bandwidth providers, long distance links, tower relays… These are challenges common to Wireless Internet Service Providers (WISPs). Spreadsheets run out of steam quickly, and the only options available are expensive enterprise packages designed to run global telecom providers.

Instant Wi-Fi Cloud of Cyborg Fauna. According to SciDev.Net, “swarming micro air vehicles” might soon be deployed over disaster areas to set up emergency wireless networks. 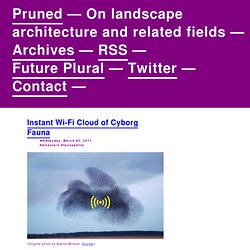 Developed by scientists at the Swiss Federal Institute of Technology, these flying robots will be “emitting a wireless signal” to establish “temporary radio or mobile communication networks to coordinate the search for survivors.” Painful lesson in OLPC mesh networking for Mongolians. Starting to use HSMM-MESH™ Could kinetic mesh networking prevent another BP-like disaster? Mesh Network Details. 2.4Ghz antenna - redux. Building a 2.4GHz Vertical Collinear Omnidirectional Antenna Update (June 4, 2002): It looks like the original links to the pages of the excellent design for this antenna are broken. 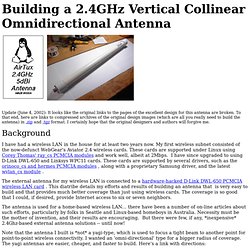 To that end, here are links to compressed archives of the original design images (which are all you really need to build the antenna) in .zip and .tgz format. I certainly hope that the original designers and authors will forgive me. Background. WLAN antenna 2.4 GHz Do-It-Yourself - Ham Radio Library. Homebrew outdoor antenna to 2.4 GHz band.Antenna gain is comparable to panel antennas including the Freedom Antenna Set sold in Finland. 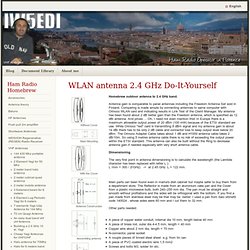 Comparing is made simple by connecting antennas to same computer with Orinoco WLAN card and indicating results in Link Test of the Client Manager. The MegaDroid project. Researchers at the U.S. government’s Sandia National Laboratories in Livermore, California, have stacked up 500 cheap desktop computers to simulate 300,000 Android smart phones in a lab. 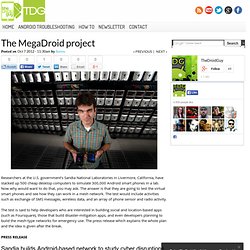 Now why would want to do that, you may ask. The answer is that they are going to test the virtual smart phones and see how they can work in a mesh network. The test would include activities such as exchange of SMS messages, wireless data, and an array of phone sensor and radio activity. The test is said to help developers who are interested in building social and location-based apps (such as Foursquare), those that build disaster-mitigation apps, and even developers planning to build the mesh-type networks for emergency use. The press release which explains the whole plan and the idea is given after the break. Sandia builds Android-based network to study cyber disruptions The project builds on the success of earlier work in which Sandia focused on virtual Linux and Windows desktop systems. It's Time to Take Mesh Networks Seriously (And Not Just for the Reasons You Think)

The internet is weak, yet we keep ignoring this fact. 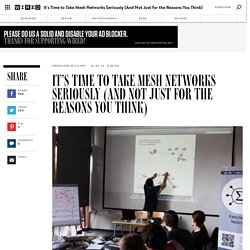 So we see the same thing over and over again, whether it’s because of natural disasters like hurricanes Sandy and Katrina, wars like Syria and Bosnia, deliberate attempts by the government to shut down the internet (most recently in Egypt and Iran), or NSA surveillance. After Typhoon Haiyan hit the Philippines last month, several towns were cut off from humanitarian relief because delivering that aid depends on having a reliable communication network.

In a country where over 90 percent of the population has access to mobile phones, the implementation of an emergency “mesh” network could have saved lives. Compared to the “normal” internet — which is based on a few centralized access points or internet service providers (ISPs) — mesh networks have many benefits, from architectural to political. The Serval Project presents Rhizome - Self Replicating Software and Data Distri. An emergency network for natural disasters. Engineering researchers at the University of Arkansas are developing an emergency communications network that will maintain operation during natural disasters and provide critical warnings and geographic information to people affected by the disasters. 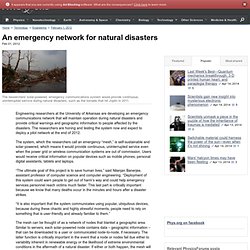 The researchers are honing and testing the system now and expect to deploy a pilot network at the end of 2012. The system, which the researchers call an emergency “mesh,” is self-sustainable and solar-powered, which means it would provide continuous, uninterrupted service even when the power grid or wireless communication systems are out of commission. Users would receive critical information on popular devices such as mobile phones, personal digital assistants, tablets and laptops. “The ultimate goal of this project is to save human lives,” said Nilanjan Banerjee, assistant professor of computer science and computer engineering.