Surprising-toothpaste-ingredient-linked-to-colon-cancer. Regular-use-of-cleaning-products-is-just-as-bad-as-smoking-cigarettes. The Cooking Oil That Could Damage Your Memory And Cause Weight Gain. When we think of dementia, most people think of aging, brain injury or a symptom of a brain disease. 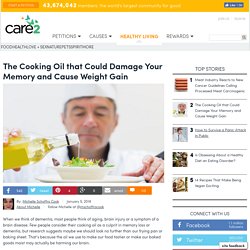 Few people consider their cooking oil as a culprit in memory loss or dementia, but research suggests maybe we should look no further than our frying pan or baking sheet. That’s because the oil we use to make our food tastier or make our baked goods moist may actually be harming our brain. New research published in the medical journal Nature says that’s exactly what we should consider. The study found that canola oil aggravated memory problems and caused weight gain during the 6-month study period. Sadly, canola oil is perhaps the most commonly-used cooking oil and is readily used in the fast food and food processing industry as well. In the study, mice with Alzheimer’s experience an aggravation of memory problems when they consumed canola oil. Additionally, canola is a heavily genetically modified crop.

Love This? Thanks for subscribing! Almost Half Of Personal Care Products Contain This Carcinogen. The chemical 1,4-dioxane is a harmful carcinogen—and guess what: it is in 46 percent of personal care products on the US market. 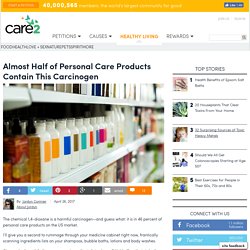 I’ll give you a second to rummage through your medicine cabinet right now, frantically scanning ingredients lists on your shampoos, bubble baths, lotions and body washes. Ah, you don’t see 1,4-dioxane on any ingredients lists, do you? Hold off on that sigh of relief. The chemical 1,4-dioxane is likely not going to appear on any product label. 32 Surprising Sources Of Toxic Heavy Metals. Heavy metal is a serious threat to the health of your body and brain. 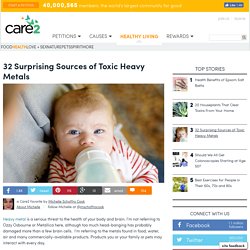 I’m not referring to Ozzy Osbourne or Metallica here, although too much head-banging has probably damaged more than a few brain cells. I’m referring to the metals found in food, water, air and many commercially-available products. Products you or your family or pets may interact with every day. Don’t panic—power is knowledge. Use this list of toxins, and the surprising places they might be lurking, to inform your buying decisions. Aluminum Although not technically a heavy metal, aluminum is a metal that can pose a serious threat to health, particularly with excessive exposure. Unacceptable Levels presented by Yekra. Le saumon, ruine écologique de la Norvège. Une association norvégienne a transmis à Rue89 les résultats catastrophiques de son étude sur l’impact environnemental de l’élevage, question ultra-sensible à Oslo. 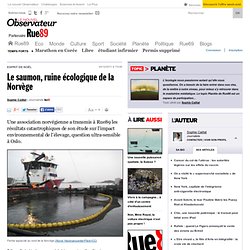 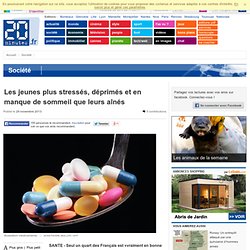 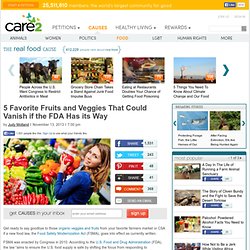 FSMA was enacted by Congress in 2010. According to the U.S. Food and Drug Administration (FDA), the law “aims to ensure the U.S. food supply is safe by shifting the focus from responding to contamination to preventing it.” Clearly this is a goal that we can all get behind, and we applaud the notion of FSMA being able to help prevent the outbreaks of food-borne illnesses that are becoming more frequent. Over the past two decades, the number of farmers markets in America has quadrupled to 8,144. However, those new food safety rules may actually put a halt to some of our healthy eating habits. The problem is the impact of the proposed rules on small farms.

This hot sauce has double the FDA’s limit for lead. That burning sensation in your mouth? 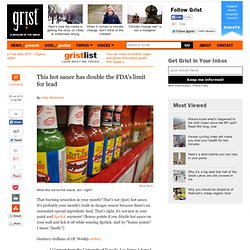 That’s not (just) hot sauce. It’s probably your mouth’s built-in danger sensor because there’s an unwanted special ingredient: lead. That’s right, it’s not just in your paint and lipstick anymore! (Bonus points if you drizzle hot sauce on your wall and lick it off while wearing lipstick. And by “bonus points” I mean “death.”) Gustavo Arellano of OC Weekly writes: [A] report from the University of Nevada, Las Vegas [shows] that there are high levels of lead in Mexican hot sauces. The result? Kids Already Have Middle Age Ilnesses: What Can We Do? The woes of adulthood are hitting today’s children too fast and not only via the pernicious influences of popular culture, marketing and peer pressure. 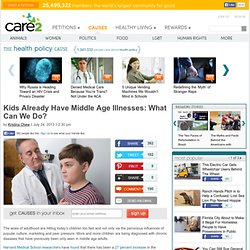 More and more children are being diagnosed with chronic diseases that have previously been only seen in middle age adults. Harvard Medical School researchers have found that there has been a 27 percent increase in the number of children aged 8-17 diagnosed with high blood pressure; one reason is a rise among children in obesity (which is also rising among kids around the globe). Today’s children are also at very real risk of type 2 diabetes, pre-diabetes, sleep apnea and joint pain, all diseases that had struck previous generations as they entered middle age.

Indeed, earlier this year, the American Academy of Pediatrics released its first guidelines for type 2 diabetes, sometimes called adult-onset diabetes, among children, as pediatricians have not been trained to identify and diagnose this disease. It’s a clear sign that the U.S. Safety last: Why a nerve-eating, cancer-causing chemical is still on the market. In November 2002, a small group of scientists gathered at the University of Kansas with one clear mission. 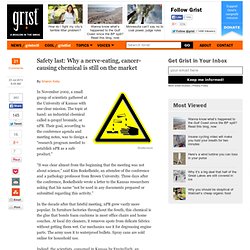 The topic at hand: an industrial chemical called n-propyl bromide, or nPB. Their goal, according to the conference agenda and meeting notes, was to design a “research program needed to establish nPB as a safe product.” “It was clear almost from the beginning that the meeting was not about science,” said Kim Boekelheide, an attendee of the conference and a pathology professor from Brown University. Three days after the conference, Boekelheide wrote a letter to the Kansas researchers asking that his name “not be used in any documents prepared or submitted regarding this activity.”

Pollutants in Californian Breast Tissue. Americans are walking chemical cocktails according to the latest report from the Centers for Disease Control and Prevention. 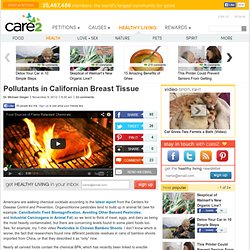 Organochlorine pesticides tend to build up in animal fat (see for example, Cannibalistic Feed Biomagnification, Avoiding Other Banned Pesticides, and Industrial Carcinogens in Animal Fat) so we tend to think of meat, eggs, and dairy as being the most heavily contaminated, but there are concerning levels found in some plant foods too. See, for example, my 1-min video Pesticides in Chinese Bamboo Shoots. I don’t know which is worse, the fact that researchers found nine different pesticide residues in cans of bamboo shoots imported from China, or that they described it as “only” nine.

Nearly all canned foods contain the chemical BPA, which has recently been linked to erectile dysfunction in men. Du Poison dans les gouters de nos enfants. E-coli Sprayed On UK Population BBC===✈ DEA to legalize marijuana chemical for Big Pharma but keep it a crime for everyone else. (NaturalNews) Have no illusions about the true nature of the so-called "War on Drugs" and the actions of the DEA. The War on Drugs has always been about protecting the profits of the drug companies which have a long and well-documented history of copying street drugs, repackaging them as "medications" and selling them to children as FDA-approved drugs (see below).

Today, yet another example emerges as the DEA moves to legalize THC in Big Pharma's pills while simultaneously making it illegal for anyone else to grow, sell or possess THC. The DEA, you see, is working to change the classification of THC from a schedule I substance (like street heroin) to a schedule III drug (pharmaceuticals). So if Big Pharma grows its own marijuana plants, extracts the THC and puts it into a "pot pill," those pills will be perfectly legal.