DEPOPULATION AGENDA 21. Six Deceptions Needed for Agenda 21. Pat Wood and the Agenda 21 Cities of the Future. What Does The Globalist Agenda / New World Order Plan Mean For New Zealanders? [and the rest of the world] Agenda 21: What Sustainable Development Really Means For You Februay 7 2015 | From: StephenBlackheath The following is a (slightly) condensed version of the book by the same name from New Zealand researcher Stephen Blackheath [Intro is available below]. 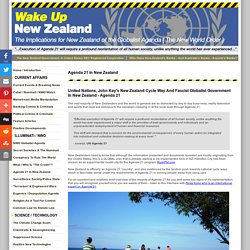 The full version of this free ebook (with references and footnotes) may be downloaded here. Sustainable Development is not an environmental movement. It's a political and economic policy masquerading as an environmental movement. And it has everything to do with an unprecedented expansion and centralisation of global power. I wrote this book for New Zealanders because I am worried that environmentalists are accepting Sustainable Development uncritically as a solution to our problems, when it is anything but. To obtain the truth, you have to negotiate a minefield of disinformation. I tried to strike a balance between research quality and conservation of my time, and I did not always get this right: 2.0 Introduction 3.0 Debt Money. Metro rail: Twenty-storey apartment towers proposed for north-west suburbs. Loaded: 0% Progress: 0% Infrastructure unveiled for Sydney's north-west Proposal for apartments set to be built near Bella Vista, Kellyville and Showgrounds stations in Sydney's north-west. 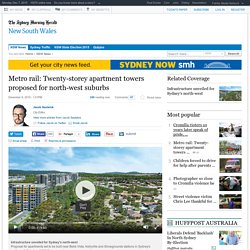 Courtesy NSW Government. Apartment towers up to twenty storeys high will be built near rail stations in Sydney's north-west, under the latest proposals for the area. The tallest buildings would emerge near the Bella Vista and Showground stations on the $8.3 billion Sydney Metro Northwest rail line – in suburbs that have traditionally been marked by low-rise housing. The state government started to release plans for more intensive development along the rail corridor in 2013. Towers proposed near Kellyville, Bella Vista and Showground stations. In September, The UN Launches A Major Sustainable Development Agenda For The Entire Planet. The UN plans to launch a brand new plan for managing the entire globe at the Sustainable Development Summit that it will be hosting from September 25th to September 27th. 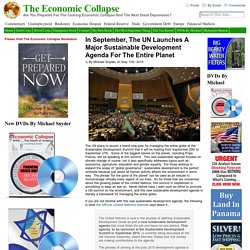 Banksters Align Behind Globalist Climate Change Agenda. Climate change is a globalist scheme for world domination Kurt Nimmo Infowars.com September 19, 2014 A cartel of globalist “development” banks has produced a report “on the need for economic collaboration to help nations adapt and avert the impact of climate change,” UPI reported on Friday. 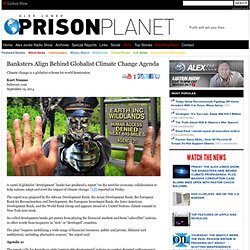 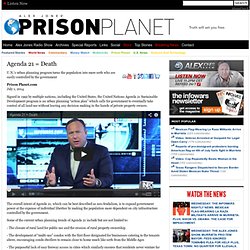 The Green Agenda. "Effective execution of Agenda 21 will require a profound reorientation of all human society, unlike anything the world has ever experienced a major shift in the priorities of both governments and individuals and an unprecedented redeployment of human and financial resources. 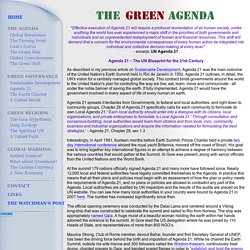 This shift will demand that a concern for the environmental consequences of every human action be integrated into individual and collective decision-making at every level. Eco-Liberation: Radical Environmentalism. Thursday, June 27th, 2013 Like this: Like Loading... by Molly Jane Biocentrism + Deep Ecology + Anti-Oppression + Solidarity = Eco-Liberation! 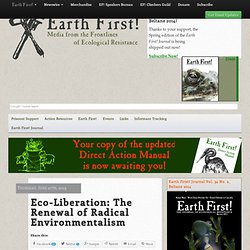 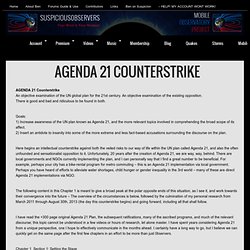 An objective examination of the existing opposition. There is good and bad and ridiculous to be found in both. They Want to Blame You. THE PRINCIPLES OF FREEDOM VS AGENDA 21. Article in NewsWithViews By Tom DeWeese In February, 2014, I was invited to present the keynote address to the annual Clouds Over America conference in Oklahoma City, OK. 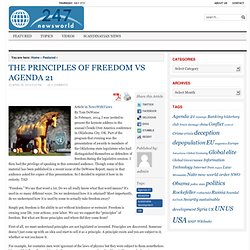 Part of the program that evening was the presentation of awards to members of the Oklahoma state legislature who had distinguished themselves as defenders of freedom during the legislative session. I then had the privilege of speaking to this esteemed audience. Though some of this material has been published in a recent issue of the DeWeese Report, many in that audience asked for copies of this presentation. So I decided to reprint it here in its entirety. TAD “Freedom.” Simply put, freedom is the ability to act without hindrance or restraint. First of all, we must understand principles are not legislated or invented. Recovered Paradise or Oblivion.