Fomalhaut Star Astrology. The fixed star Fomalhaut is positioned at 3º Pisces 52 ’in the southern fish. 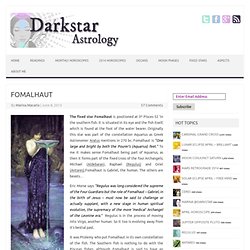 It is situated in its eye and the fish itself, which is found at the foot of the water bearer. Originally this star was part of the constellation Aquarius as Greek Astronomer Aratus mentions in 270 bc. Fomalhaut is “One large and bright by both the Pourer’s (Aquarius) feet.” To me it makes sense Fomalhaut being part of Aquarius, as then it forms part of the fixed cross of the four Archangels; Michael (Aldebaran), Raphael (Regulus) and Oriel (Antares).Fomalhaut is Gabriel, the human. The others are beasts… The Horror-Scope of Algol - by Nick Kollerstrom. Algol. From p.332 of Star Names, Richard Hinckley Allen, 1889. 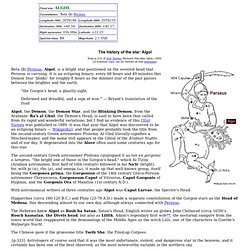 [A scanned copy can be viewed on this webpage] Beta (β) Perseus, Algol, is a bright star positioned on the severed head that Perseus is carrying. It is an eclipsing binary; every 68 hours and 49 minutes this Demon Star ‘blinks’ for roughly 8 hours as the dimmer star of the pair passes between the brighter and the earth. "the Gorgon's head, a ghastly sight, Deformed and dreadful, and a sign of woe. " — Bryant's translation of the Iliad. Algol, the Demon, the Demon Star, and the Blinking Demon, from the Arabians' Ra's al Ghul, the Demon's Head, is said to have been thus called from its rapid and wonderful variations; but I find no evidence of this [Star Names was published in 1889, it was that year that Algol was discovered to be an eclipsing binary — Wikipedia], and that people probably took the title from the second-century Greek astronomer Ptolemy. 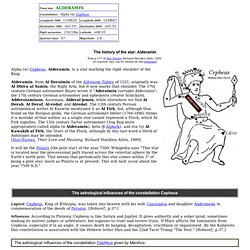 [A scanned copy can be viewed on this webpage] Alpha (α) Cepheus, Alderamin, is a star marking the right shoulder of the King. Alderamin, from Al Deraimin of the Alfonsine Tables of 1521, originally was Al Dhira al Yamin, the Right Arm, but it now marks that shoulder. The 17th century German astronomer Bayer wrote it "Aderaimin corrupte Alderamin"; the 17th century German astronomer and ephemeris creator Schickard, Adderoiaminon; Assemani, Alderal jemin; while elsewhere we find Al Derab, Al Deraf, Al-redaf, and Alredat. The 13th century Persian astronomical writer Al Kazwini mentioned it as Al Firk, but, although thus found on the Borgian globe, the German astronomer Ideler (1766-1846) thinks it a mistake of that author, as a single star cannot represent a Flock, which Al Firk signifies.

Fixed Stars in Astrology. Part 2 – Theory: history, celestial latitude, parans, advices As the planets, fixed stars are a visible presence on our sky, so there has to be a meaning for them too, fixed stars symbolise something and astrologers want to know what. 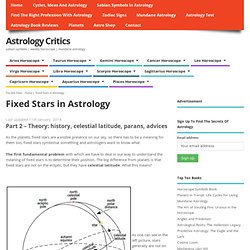 The first fundamental problem with which we have to deal in our way to understand the meaning of fixed stars is to determine their position. The big difference from planets is that fixed stars are not on the ecliptic, but they have celestial latitude. What this means? Fixed Stars. Fixed Stars Lists. Fixed Star Antares. Antares is the alpha star in constellation Scorpio. 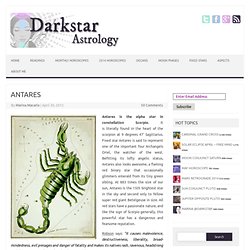 It is literally found in the heart of the scorpion at 9 degrees 47′ Sagittarius. Fixed star Antares is said to represent one of the important four Archangels Oriel, the watcher of the west. Befitting its lofty angelic status, Antares also looks awesome, a flaming red binary star that occasionally glimmers emerald from its tiny green sibling. At 883 times the size of our sun, Antares is the 15th brightest star in the sky and second only to fellow super red giant Betelgeuse in size.

All red stars have a passionate nature, and like the sign of Scorpio generally, this powerful star has a dangerous and fearsome reputation. Robson says: “It causes malevolence, destructiveness, liberality, broad-mindedness, evil presages and danger of fatality and makes its natives rash, ravenous, headstrong and destructive to themselves by their own obstinacy.” It’s interesting how the Scorpions is continually feared and revered throughout mythology.

Fomalhaut Star Astrology. Fixed Stars & The Constellations History. There are two methods of using the fixed stars and their constellations for astrological purposes nowadays. 1) The fixed stars longitude method on the ecliptic or 2) The visual astrology of parans. 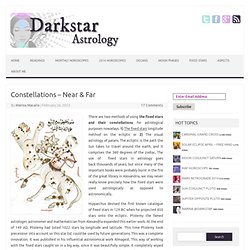