3D Printing, Modeling, and Rapid Prototyping. Getting Started with 3D Design. 3D Design Software 101 While MakerBot operators are more than happy to print the tens of thousands of incredible objects posted to Thingiverse, eventually many want to get started designing models of their own. 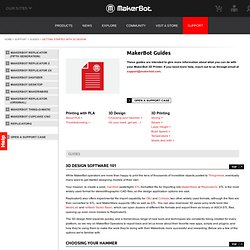 Your mission: to create a solid, manifold (watertight) STL-formatted file for importing into MakerWare or ReplicatorG. STL is the most widely used format for stereolithographic CAD files, so the design application options are vast. ReplicatorG also offers experimental file import capability for OBJ and Collada, two other widely used formats, although the files are then converted to STL, and MakerWare supports OBJ as well as STL. You can also download 3D swiss army knife tools like MeshLab and netfabb Studio Basic, which can open dozens of different file formats and export them as binary or ASCII STL files, opening up even more models to ReplicatorG. Choosing your Hammer To get started building a model, you'll need some good tools. Modern Nerd. Mechanical Design for 3D Printing - The Adventures of Eiki Martinson. 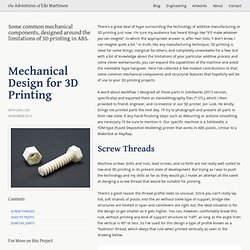 I'm sure my audience has heard things like “It'll make whatever you can imagine”, to which the appropriate answer is, after Han Solo, “I don't know, I can imagine quite a bit.” In truth, like any manufacturing technique, 3D printing is ideal for some things, marginal for others, and completely unworkable for a few; but with a bit of knowledge about the limitations of your particular additive process and some clever workarounds, you can expand the capabilities of the machine and avoid the inevitable hype hangover. Here I've collected a few modest contributions to that: some common mechanical components and structural features that hopefully will be of use to your 3D printing projects. Screw Threads. PhysiblesMarket.com. 3D Printing Service In The UK Offered By London Based 3D Printers.

Www.myminifactory.com. A brief review of the 3D printers of 2012. The avalanche of popular news stories has propelled 3D printing into the minds of consumers. 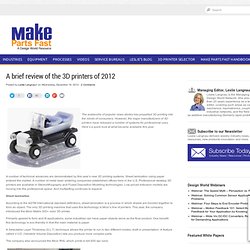 However, the major manufacturers of 3D printers have released a number of systems for professional uses. Here’s a quick look at what became available this year. A number of technical advances are demonstrated by this year’s new 3D printing systems. Sheet lamination using paper entered the market. A number of metal laser sintering companies established offices here in the U.S. 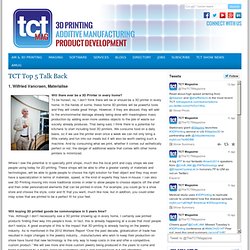 Wilfried Vancraen, Materialise Will there ever be a 3D Printer in every home? To be honest, no, I don’t think there will be or should be a 3D printer in every home. In the hands of some, these home 3D printers will be powerful tools and they will create great things. However, if they are abused, they will add to the environmental damage already being done with meaningless mass production by adding even more useless objects to the pile of waste our society already produces. Where I see the potential is in specialty print shops, much like the local print and copy shops we see people using today for 2D printing.

Will buying 3D printed goods be commonplace in 5 years time? What's the best use of 3D printing / Additive Manufacturing that you have seen recently? Although not a recent example, one application of AM that continues to impress me is the creation of personalized, acoustically-optimized hearing aids. Beyond 3D printing, what technologies excite you the most at the moment? 2. 3. EnvisionTEC. Boots Industries. 3D printing - PICJOY Co.,Ltd. Affordable, Easy-to-Use 3D Printers. 3D Printing Service i.materialise. Rapid Prototyping, Advance Digital Manufacturing, 3-D Modeling, 3-D CAD. Advanced Applications - FORTUS by Stratasys - Manufacturing Tools, Thermoforming, Investment Casting. 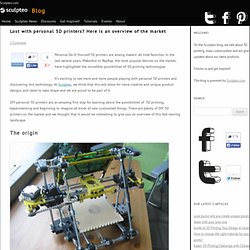 In the last several years, Makerbot or RepRap, the most popular devices on the market, have highlighted the incredible possibilities of 3D printing technologies. It’s exciting to see more and more people playing with personal 3D printers and discovering this technology. At Sculpteo, we think that this will allow for more creative and unique product designs and ideas to take shape and we are proud to be part of it. DIY personal 3D printers are an amazing first step for learning about the possibilities of 3D printing, experimenting and beginning to imagine all kinds of new customized things.

There are plenty of DIY 3D printers on the market and we thought that it would be interesting to give you an overview of this fast-moving landscape: Portabee. Cartesio. Cartesio V0.5 Release status: working Cartesio is a professional grade 3D printer. 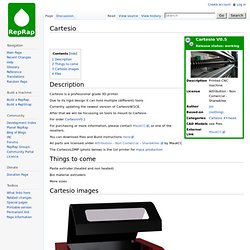 Due to its rigid design it can hold multiple (different) tools. Currently updating the newest version of CartesioW1CE. After that we will be focussing on tools to mount to Cartesio. For older CartesioV0.1 For purchasing or more information, please contact MaukCC, or one of the resellers. You can download files and Build instructions Here All parts are licensed under Attribution - Non Comercial - ShareAlike. by MaukCC The CartesioLDMP (photo below) is the 1st printer for mass production Paste extruder (heated and non heated) Main Page - Fab @ Home. Open source filament maker. Plans now available for the Filabot Wee You might remember Tyler McNaney’s Filabot, the personal filament maker, we featured earlier in the year that about his Kickstarter campaign to raise money for development costs. 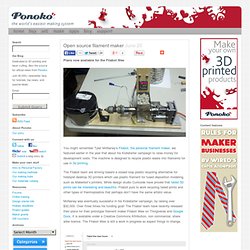 The machine is designed to recycle plastic waste into filaments for use in 3d printing. The Filabot team are striving toward a closed loop plastic recycling alternative for hobbyist desktop 3D printers which use plastic filament for fused deposition modeling, such as Makerbot’s printers. While design studio Cunicode have proved that failed 3D prints can be interesting and beautiful.

Filabot puts to work recycling failed prints and other types of thermoplastics that perhaps don’t have the same artistic value. McNaney was eventually successful in his Kickstarter campaign, by raising over $32,000. ReplicatorG is a simple, open source 3D printing program - ReplicatorG. 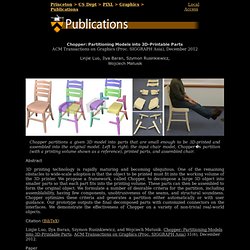 SIGGRAPH Asia), December 2012 Chopper partitions a given 3D model into parts that are small enough to be 3D-printed and assembled into the original model. Left to right: the input chair model, Choppers partition (with a printing volume shown as a reference), printed parts, and assembled chair. 3D printing technology is rapidly maturing and becoming ubiquitous. One of the remaining obstacles to wide-scale adoption is that the object to be printed must fit into the working volume of the 3D printer. (BibTeX) 3D printing and 3D printers news, trends and resources. Industrial Plastic Fabrications. 3D printing, Plastic Fabrication and CNC Machining Services in the UK. Adding a '3D print' button to animation software. G.I. 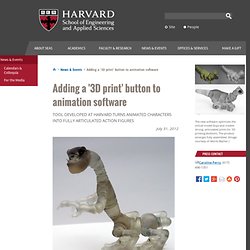 Joe may have finally met his match. (Photo courtesy of Moritz Bächer.) Cambridge, Mass. - July 31, 2012 - Watch out, Barbie: omnivorous beasts are assembling in a 3D printer near you. A group of graphics experts led by computer scientists at Harvard have created an add-on software tool that translates video game characters—or any other three-dimensional animations—into fully articulated action figures, with the help of a 3D printer. The project is described in detail in the Association for Computing Machinery (ACM) Transactions on Graphics and will be presented at the ACM SIGGRAPH conference on August 7.

Besides its obvious consumer appeal, the tool constitutes a remarkable piece of code and an unusual conceptual exploration of the virtual and physical worlds. "In animation you're not necessarily trying to model the physical world perfectly; the model only has to be good enough to convince your eye," explains lead author Moritz Bächer, a graduate student in computer science at SEAS. Venture Scanner : The Best Way to Find and Close Strategic Deals.