Personal Industrial Robotic Arm for Makers – Personal Industrial Robotic Arm for Makers. Petrographic Analyzer for Geoscientists by Mark Smith and Daniel Saftner. Documentary as a Tool in the Hands of Young Artisans by SNEJINA LATEV. Risks and challenges ECONOMIC INABILITY to afford digital technologies and reliable Internet You pledges will buy their cameras! 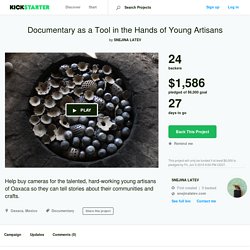 These cameras are for them. They will be available to them to use to document and promote their work even after we finish collecting footage for the film. We will have access to Internet and a temporary media center in Oaxaca at San Pablo Cultural Center. LACK OF EDUCATION in the use of digital technology Your pledges will employ a local assistant/educator! While I am confident in my extensive knowledge and expertise in digital media as the starting point for educating the young members on the team, I plan to hire a local assistant with a background in education to help me devise the best possible experience for the young artisans.

LACK OF COLLABORATION among the diverse communities Your pledges will facilitate starting the documentary process that will bring the youths together. Learn about accountability on Kickstarter. Store. JUMP - The Smartphone Charger That Charges Itself by Native Union. BRG - Gigaom - Wall Street Journal - Gizmodo - Mashable - The Telegraph - Cult of Mac - iDigital Times - Engadget - Engadget 2 - MacRumors - TheNextWeb - iLounge - AskMen - RunAroundTech - Runaroundtech 2 - Geeky Gadgets - PSFK We’ve all faced the frustrating issue of our smartphone running out of power, just when you want to make that call, send a message, or find where you are on a map. 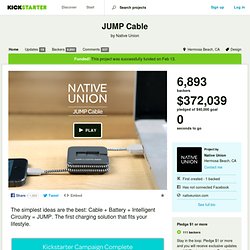 From studying the market, we discovered key user needs that were not being satisfied. JUMP creates a new category of product – one that fulfills these previously ignored aspects of the user experience. PowerUp 3.0 - Smartphone Controlled Paper Airplane by Shai Goitein. 3D mapping is a 'Pisa' cake for Aussie scientists. Australian researchers have created the first ever interior 3D map of Italy’s iconic Leaning Tower of Pisa by using a breakthrough mobile laser mapping system. 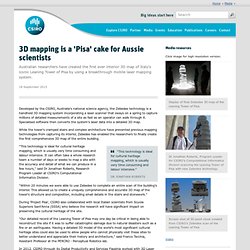 Developed by the CSIRO, Australia's national science agency, the Zebedee technology is a handheld 3D mapping system incorporating a laser scanner that sways on a spring to capture millions of detailed measurements of a site as fast as an operator can walk through it. Specialised software then converts the system's laser data into a detailed 3D map. While the tower's cramped stairs and complex architecture have prevented previous mapping technologies from capturing its interior, Zebedee has enabled the researchers to finally create the first comprehensive 3D map of the entire building.

OpenBeam - An open source miniature construction system by Terence Tam. With funding about to close, I will no longer be able to edit the project page here. 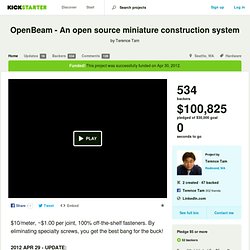 So, please visit us online at the following locations for the latest updates: Safecast X Kickstarter Geiger Counter by Sean Bonner. We wanted to do something special for the Kickstarter community, who helped us get Safecast moving in the first place, and thought that a limited edition version of the geiger counter we designed, at a discounted price, would be a cool way to do that. 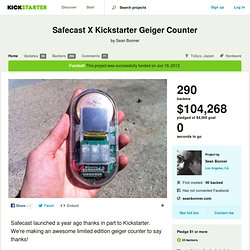 So here you go: a Kickstarter exclusive Safecast geiger counter. Limited clear plastic casing (like these pics), numbered edition of however many people pre-order them here. The only way ever to get this clear version is from this Kickstarter campaign. Obviously, this edition is a real working geiger counter, 100% functionally identical to the forthcoming retail release version.

Around this time last year we created Safecast, an organization with the goal of collecting and distributing accurate and detailed radiation contamination information to people in Japan whose lives had been impacted by the events at the Fukushima Daiichi Nuclear Plant. Our friend bunnie jumped in to help with the design, he wrote about his process here. Building the world's longest marble run relaunch by walter mason. This is essentially the same project as my first unsuccesssful project. the only difference is that it will be running for 90 days as opposed to 33. 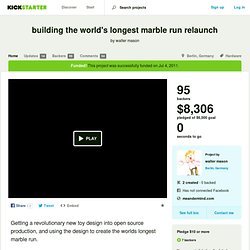 This design will be open source manufacturing. I hope that if it becomes truly popular, it could be cut in the country it is bought in, or at least in the same continent. SkyCube: The First Satellite Launched by You! by Tim DeBenedictis. You, Team SkyCube, have outdone yourselves. 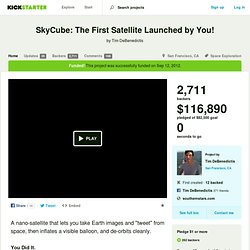 Not only did you meet our original $82.5K funding goal, you surpassed our stretch goal of $110K. Everyone knows Neil Armstrong's most famous quote. But here's something else he said: "Science has not yet mastered prophecy. Try iOS: iPhone App Development Course by Eric Allam. We want to create Try iOS, a Code School course which teaches how to build your own iPhone apps. 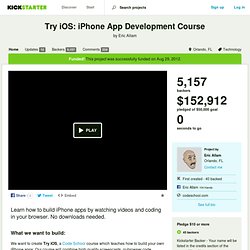 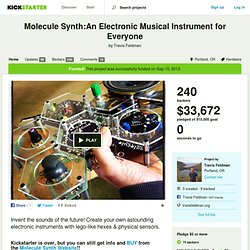 ...I can't wait for my son and I to get our hands on a set! " MakeZine Blog: "[Molecule Synth is] a cool synthesizer that can be pieced together, Lego-like, from a series of hexagonal modules that feature different effects" Coolhunting.com: "Resembling more of a genius child's wind-up toy than a musical instrument...Molecule Synth combines rearrangeable hexagonal pieces to create an unconventional version of the traditional keyboard synthesizer.

" Gadgetronica.com: "From now on, not only are your compositions your brainchild but the instrument on which it was created will be too! Thanks to...the Molecule Synth. " The MOLECULE SYNTH is a unique, utterly new kind of musical instrument. Ghost: Just a Blogging Platform by John O'Nolan. OpenBeam Kossel Pro - A new type of 3D Printer by Terence Tam. Linkbot, Create with Robots by Barobo, Inc. The Linkbot is a modular robotic packed with technology and ready to bring your project from idea to working prototype. 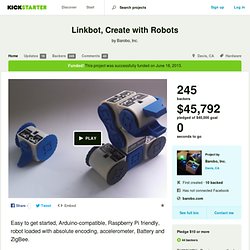 It's easy to get started with these built-in modes. TiltDrive lets you drive a Linkbot using the accelerometer of your smartphone or another Linkbot. ManyLabs. ManyLabs: Sensors for Students by Peter Sand. We are creating a collection of sensor kits for science classrooms. Each kit will be accompanied by web-based interactive lessons that incorporate live sensor data. These interactive lessons will guide students through using the sensors and exploring scientific concepts. In addition to these lessons, each kit will have a teacher's guide.

We will provide full support and documentation for teachers. We will also provide connections between the lessons and the Next Generation Science Standards. We believe students should learn from hands-on real-world experiences. Ultimately we want to build an entire ecosystem of hardware, software, and content for teaching math and science. For this Kickstarter project we plan to design, create, test, and distribute a collection of kits for science classrooms. Each kit uses an Arduino microcontroller, an electronic board that connects to your computer using a USB cable. Spike : Laser accurate measurement & modeling on smartphones by ike. At ike we've been designing measurement & modeling systems for some of the most demanding industrial customers the world over. Now we've made it our mission to bring that functionality to you. Carbon Fiber PLA and More! Performance 3D Printer Filament. by ProtoPlant INC. What is Proto-Pasta? Proto-Pasta is a project that will change the landscape of what is available for consumer grade 3D printing materials and how those materials are evaluated.

We have three goals for this project: 1- Make Available New Materials with Continued Innovation Consumer grade 3D printing is fast growing and material selection is a bottleneck for continued expansion into more demanding applications. PLA and ABS are the two most available materials, but they have some serious drawbacks like low softening temperature for PLA and low stiffness for ABS. VERVE: Plug the world into your computer by inXus interactive.

"[The] possibilities seem endless. " Tom Spendlove, Designer Edge "Verve lets you play games like you never have before. " Vegard Ottervig, Teknofil "[The] interface makes customization the absolute easiest thing ever! " Grant Lahaie, EpicPodQuest "The VERVE has the potential to revolutionize the way we interact with our computers. " "Hackers, makers, tinkerers (is that a word?) "VERVE's strength is that you do not need engineering skills to use it. " "Programming the sensors ... is as simple as a couple clicks of your mouse. " Deltaprintr - A simple, affordable 3D Printer! by Deltaprintr. We engineered the Deltaprintr to be simple, efficient, and affordable. We want as many people as possible to be able to get their hands on this exciting new technology without having to sacrifice quality or user-friendliness.