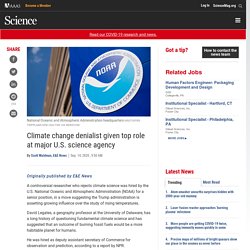 National Oceanic and Atmospheric Administration (NOAA) for a senior position, in a move suggesting the Trump administration is asserting growing influence over the study of rising temperatures. David Legates, a geography professor at the University of Delaware, has a long history of questioning fundamental climate science and has suggested that an outcome of burning fossil fuels would be a more habitable planet for humans.

He was hired as deputy assistant secretary of Commerce for observation and prediction, according to a report by NPR. The move marks an escalation within the Trump administration to undermine the agency's ability to warn the public of climate risks, observers said. American Teens Are Frightened by Climate Change, But They're Starting to Take Action. In a coastal town in Washington state, climate change has a high school junior worried about the floods that keep deluging his school. 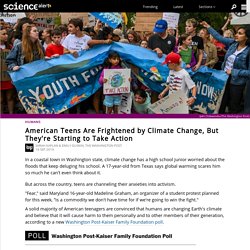 A 17-year-old from Texas says global warming scares him so much he can't even think about it. But across the country, teens are channeling their anxieties into activism. "Fear," said Maryland 16-year-old Madeline Graham, an organizer of a student protest planned for this week, "is a commodity we don't have time for if we're going to win the fight. " How Americans Think About Climate Change, in Six Maps. Americans want to restrict carbon emissions from coal power plants. The White House and Congress may do the opposite.

Percentage of adults per congressional district who support strict CO2 limits on existing coal-fired power plants In every congressional district, a majority of adults supports limiting carbon dioxide emissions from existing coal-fired power plants. But many Republicans in Congress (and some Democrats) agree with President Trump, who this week may move to kill an Obama administration plan that would have scaled back the nation’s greenhouse gas emissions.

Nationally, about seven in 10 Americans support regulating carbon pollution from coal-fired power plants — and 75 percent support regulating CO2 as a pollutant more generally. Global Concern about Climate Change, Broad Support for Limiting Emissions. In a few weeks, world leaders will gather in Paris to negotiate a climate change agreement that will frame the global agenda on this issue for the next decade and beyond. 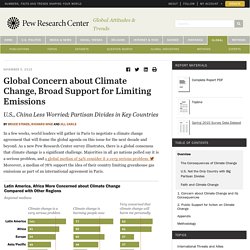 As a new Pew Research Center survey illustrates, there is a global consensus that climate change is a significant challenge. Majorities in all 40 nations polled say it is a serious problem, and a global median of 54% consider it a very serious problem. Moreover, a median of 78% support the idea of their country limiting greenhouse gas emissions as part of an international agreement in Paris. Nevertheless, there are significant regional differences on the perception of the problems posed by global warming. And Americans and Chinese, whose economies are responsible for the greatest annual CO2 emissions, are among the least concerned. Guardian/Vice poll finds most US 2020 voters strongly favor climate action. The climate crisis is set to be a significant factor in a US presidential election for the first time, with new polling showing a clear majority of American voters want decisive action to deal with the threats posed by global heating. 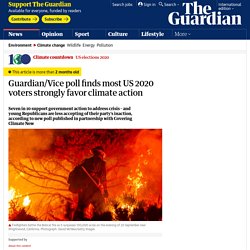 Seven in 10 voters support government action to address climate change, with three-quarters wanting the US to generate all of its electricity from renewable sources such as solar and wind within 15 years. Nearly two-thirds of respondents said they would be more likely to vote for a presidential candidate who supports the complete shift to clean energy, with a further seven in 10 voters supporting US involvement in the Paris climate agreement, which commits countries to tackling dangerous heating. Republicans target green-energy funds to prevent California wildfires, blackouts. The tons of greenhouse gases emitted each year by California wildfires are thwarting the state’s aggressive climate-change agenda, and as far as Assemblyman James Gallagher is concerned, that’s a problem. 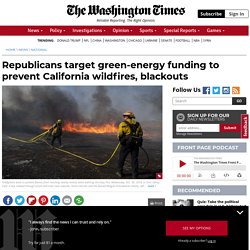 He and other California Republican legislators are seeking to suspend the state’s Renewables Portfolio Standard, which calls for 100% green energy by 2045 — a suspension that could free up billions for PG&E and other utilities to invest in fire prevention measures, including burying aging power lines and thinning overgrown forests. “In 2017 alone, PG&E spent $2.4 billion of your ratepayer dollars on buying expensive renewable power,” Mr. Gallagher said. “They only spent $1.5 billion on updating their infrastructure. That’s completely backward and needs to change.” Ordinarily, such a proposal would be dead on arrival in Sacramento, but these are no ordinary times. 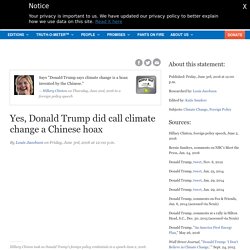 At one point, Clinton said, "Donald Trump says climate change is a hoax invented by the Chinese. " Did he? Yes, though he later said it was a joke. Trump Administration to Begin Official Withdrawal From Paris Climate Accord. WASHINGTON — The Trump administration is preparing the formal withdrawal of the United States from the Paris Agreement on climate change, according to three people briefed on the matter, a long expected move that nevertheless remains a powerful signal to the world. 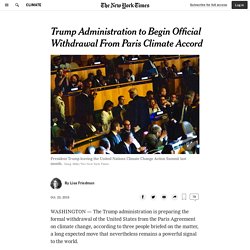 The official action sets in motion a withdrawal that still would take a year to complete under the rules of the accord. Abandoning the landmark 2015 agreement in which nearly 200 nations vowed to reduce planet warming emissions would fulfill one of President Trump’s key campaign promises while placing the world’s largest economy at odds with the rest of the globe on a top international policy priority. E.P.A. Chief Doubts Consensus View of Climate Change. At the same time, the White House is considering a 17 percent cut to the budget of NOAA, one of the nation’s premier agencies of climate science research, according to a memo obtained by The Washington Post. 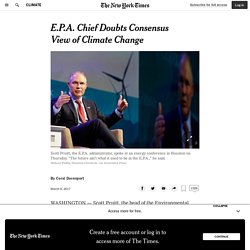 Mr. Pruitt’s remarks on Thursday were consistent with his past public statements questioning the established science of human-caused climate change, but in denying the role played by carbon dioxide, they go a step further. In addition to putting him at odds with the consensus of climate scientists, Mr. Pruitt’s remarks also raise the possibility that, as the Trump administration moves forward with unwinding Mr. Obama’s climate change regulations, it could put the administration in violation of federal law. In 2009, the E.P.A. released a legal opinion known as an endangerment finding concluding that, because of its contribution to global warming, carbon dioxide in large amounts met the Clean Air Act’s definition of a pollutant that harms human health. In his Senate hearing, Mr. Mr. Les États-Unis : le Far West énergétique ?