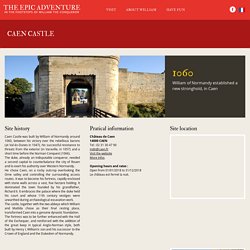 At the time, Caen was but a small market town, yet the duke’s decision to build the castle here was not aimed at controlling the town itself, but at establishing his power over the Cotentin barons. Indeed, they were difficult to control, and Falaise Castle was too far away from the area for William to keep them in check in the case of a rebellion. In contrast with other edifices at the time, Caen Castle looked more like a military fortress than a royal residence. For, although built on a rocky outcrop, the castle is dominated by the hillside where Caen University has since been established. Tapisserie de Bayeux - Visite de la tapisserie de Bayeux - Bayeux Museum. The Bayeux Tapestry - Seven Ages of Britain - BBC One.

A Brief History of the Normans. Types of Castle: Motte and Bailey Castles. The Bailey A bailey is an enclosed courtyard, typically surrounded by a wooden palisade overlooked by the motte. 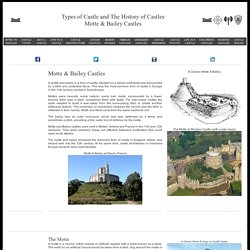 It was used as a living area by vassals who served the lord of the castle, generally including a blacksmith, a miller and most of the necessary craftsmen of the age. A castle could have more than one bailey, sometimes an inner and an outer, such as at Warkworth Castle, where expansion of the castle led to enclosure of a new bailey with a wall. Alternatively, the multiple baileys could flank the motte, as at Windsor Castle. The bailey was often enclosed inside another wooden palisade and surrounding ditch, adding an extra layer of protection.

There was in many cases another drawbridge at the entrance into the bailey that could similarly be raised for protection. Motte and bailey castles later evolved into Norman castles that evolved later into even better Concentric castles. Originally a bailey was controlled by an officer called a bailiff. William the Conqueror. Biography William, Duke of Normandy, conquered England in 1066. 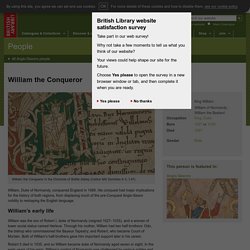 His conquest had major implications for the history of both regions, from displacing much of the pre-Conquest Anglo-Saxon nobility to reshaping the English language. William’s early life William was the son of Robert I, duke of Normandy (reigned 1027–1035), and a woman of lower social status named Herleva. Through his mother, William had two half-brothers: Odo, the bishop who commissioned the Bayeux Tapestry; and Robert, who became Count of Mortain. Robert II died in 1035, and so William became duke of Normandy aged seven or eight. William also launched campaigns against other neighbouring rulers to expand his territory. William and England before the Conquest 1066 was not William’s first foray into English politics. William probably visited England at least once before 1066, in 1051. Nothing else is known about this visit. As well as visiting England, William hosted English nobles at his court in Normandy. 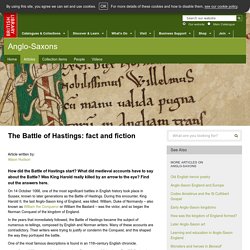 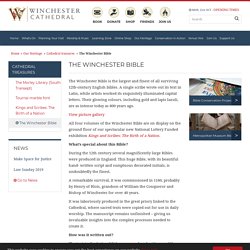 A single scribe wrote out its text in Latin, while artists worked its exquisitely illuminated capital letters. Their glowing colours, including gold and lapis lazuli, are as intense today as 800 years ago. View picture gallery All four volumes of the Winchester Bible are on display on the ground floor of our spectacular new National Lottery Funded exhibition Kings and Scribes: The Birth of a Nation. What’s special about this Bible? During the 12th century several magnificently large Bibles were produced in England. The Making of the Winchester Bible. January 21, 2015 Charles T. 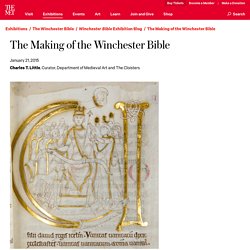 Little, Curator, Department of Medieval Art and The Cloisters Fig. 1. An unfinished image of Ecclesiastes by the Master of the Leaping Figures. Book of Ecclesiastes, V, Winchester Bible, fol. 268. Photograph by John Crook. Medieval Knight. What is Magna Carta? Human Population Through Time. How clean were Medieval people? How did people try to ‘cure’ the Plague? (Flagellants) Jobs in the Middle Ages - Medievalists.net. Want to know what kind of jobs there were in the Middle Ages? 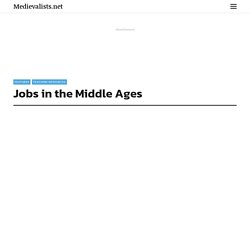 A unique source from 15th century Germany gives us some beautiful images of medieval people at work. Known the House Books of the Nuremberg Twelve Brothers Foundation, these were records of a charitable foundation started in the city of Nuremberg in 1388. The foundation would take 12 poor and needy people and provide them with training in a trade. Starting around 1425 their books would contain one-page illustration of the people they had helped, usually giving their name and what profession they were in. Here are twenty examples of medieval jobs from around the mid-15th century. 1. Hans Lengenfelder is cutting on meat on a thick table, while other products, including sausages, are for sale. 2.

Zenner is placing bread to baked in an oven. 3. Konrad is using a pickaxe and other tools to work over the stone blocks. 1390 AD: London in the Late Middle Ages - Medievalists.net. We recently, we spoke with Dr. 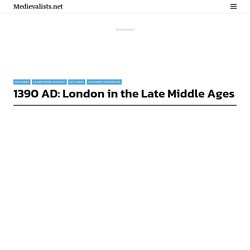 Matthew Green about his new History of London course.