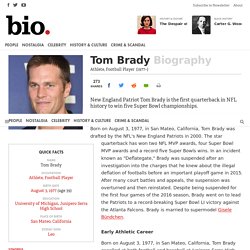 The star quarterback has won two NFL MVP awards, four Super Bowl MVP awards and a record five Super Bowls wins. In an incident known as "Deflategate," Brady was suspended after an investigation into the charges that he knew about the illegal deflation of footballs before an important playoff game in 2015. After many court battles and appeals, the suspension was overturned and then reinstated. Despite being suspended for the first four games of the 2016 season, Brady went on to lead the Patriots to a record-breaking Super Bowl LI victory against the Atlanta Falcons. Patriots win Super Bowl on James White touchdown in overtime. Watch: Falcons and Patriots Players Reveal their Spirit Animals at Super Bowl Media Day. Video: Making Friends and Having Fun with NFL FLAG Football.