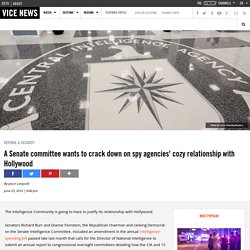 Senators Richard Burr and Dianne Feinstein, the Republican chairman and ranking Democrat on the Senate Intelligence Committee, included an amendment in the annual intelligence-spending bill passed late last month that calls for the Director of National Intelligence to submit an annual report to congressional oversight committees detailing how the CIA and 15 other intelligence agencies interact with the entertainment industry. The measure, which defines the entertainment industry broadly, follows a series of reports published by VICE News over the past year detailing the agency's role in the production of 22 entertainment-related projects between 2006 and 2011.

They included major motion pictures like Zero Dark Thirty and Argo; reality television series such as Top Chef; the cable drama series, Covert Affairs; and books including The Devil's Light by Richard North Patterson. 'State of Surveillance' with Edward Snowden and Shane Smith (FULL EPISODE) The small and surprisingly dangerous detail the police track about you. Tiny Constables and the Cost of Surveillance: Making Cents Out of United States v. Jones.

Introduction As Judge Richard Posner once said, “Technological progress poses a threat to privacy by enabling an extent of surveillance that in earlier times would have been prohibitively expensive,” thereby “giving the police access to surveillance techniques that are ever less expensive and ever more effective.”Among these “‘fantastic advances’” in surveillance technology is the Global Positioning System (GPS), which provides law enforcement with an inexpensive means to track the precise geographic locations of criminal suspects. 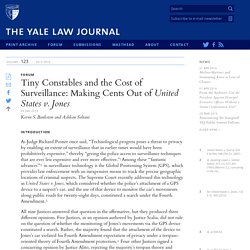 The Supreme Court recently addressed this technology in United States v. Jones, which considered whether the police’s attachment of a GPS device to a suspect’s car, and the use of that device to monitor the car’s movements along public roads for twenty-eight days, constituted a search under the Fourth Amendment. All nine Justices answered that question in the affirmative, but they produced three different opinions. Alito continues: A. 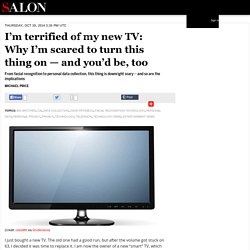 The old one had a good run, but after the volume got stuck on 63, I decided it was time to replace it. I am now the owner of a new “smart” TV, which promises to deliver streaming multimedia content, games, apps, social media and Internet browsing. Oh, and TV too. The only problem is that I’m now afraid to use it. You would be too — if you read through the 46-page privacy policy. The amount of data this thing collects is staggering. It also has a built-in camera — with facial recognition. More troubling is the microphone. You may not be watching, but the telescreen is listening. I do not doubt that this data is important to providing customized content and convenience, but it is also incredibly personal, constitutionally protected information that should not be for sale to advertisers and should require a warrant for law enforcement to access. According to retired Gen. 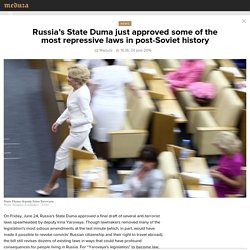 Russians will be required to inform the authorities about anything they know regarding preparations for terrorist attacks, armed rebellions, and several other kinds of crimes on a list that has more than half a dozen different offenses. Anyone who doesn't faces up to a year in prison. Justifying terrorism on social media Publishing online incitements to terrorism, or even expressing approval of terrorism on the Internet, will be regarded legally as publishing such comments in the mass media, subjecting individuals to the same strict penalties now imposed on media outlets. Telephone and SMS records, and police access to that data One part of Yarovaya's legislation that passed the Duma almost without revisions is the language creating new requirements for how Russia's telecoms store data. Republicans are coming for your browsing histories, not your guns.

Congressional Republicans have a plan to prevent deadly attacks like the Orlando nightclub massacre from happening again: Give the FBI easy access to citizens' browsing history and email data without the hassle of having to obtain a warrant first. 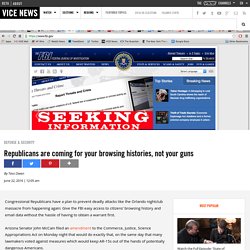 Arizona Senator John McCain filed an amendment to the Commerce, Justice, Science Appropriations Act on Monday night that would do exactly that, on the same day that many lawmakers voted against measures which would keep AR-15s out of the hands of potentially dangerous Americans. "In the wake of the tragic massacre in Orlando, it is important our law enforcement have the tools they need to conduct counterterrorism investigations and track 'lone wolves'" McCain wrote in a statement. So far, authorities investigating Orlando gunman Omar Mateen have concluded that he was a "lone wolf" actor who self-radicalized from consuming extremist propaganda online.