In Sydney Phobia Therapy, I offer a combination of evidence-based therapies including Neuro Linguistic Programming, Psychotherapy and Clinical Hypnotherapy to give you freedom from those limitations. Get an appointment today with the Best Hypnotherapist for phobia in the North Shore. Call Now!

Phobia Therapy in North Shore Sydney. Fear Of Public Speaking (Glossophobia) in North Shore, Sydney. Jerry Sienfeld once joked “if you have to go to a funeral, you’re better off in the casket than doing the eulogy” Bob is very successful and well liked in his career. 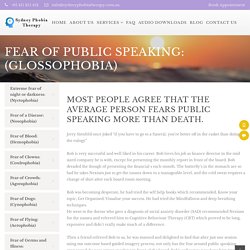 Bob loves his job as finance director in the mid sized company he is with, except for presenting the monthly report in front of the board. Bob dreaded the though of presenting the financial s each month. The butterfly’s in the stomach are so bad he takes Nexium just to get the nausea down to a manageable level, and the cold sweat requires a change of shirt after each board room meeting. Bob was becoming desperate, he had tried the self help books which recommended, Know your topic; Get Organised; Visualise your success.

Then a friend referred Bob to us, he was stunned and delighted to find that after just one session using our outcome based guided imagery process, not only has the fear around public speaking evaporated, he now enjoys speaking in front of the board. Book now. Fear Of Crowds (Agoraphobia) in North Shore, Sydney. Anxiety has been something I’ve dealt with since I was 7, I didn’t know what it was at the time, I just know that it started after my parents messy split up. 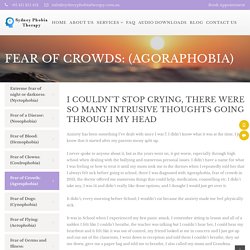 I never spoke to anyone about it, but as the years went on, it got worse, especially through high school when dealing with the bullying and numerous personal issues. Fear Of Heights (Acrophobia) in North Shore, Sydney. I was paralysed by escalators, and in a shopping centre would regularly have to ask strangers if I could hold on to them as we went down. 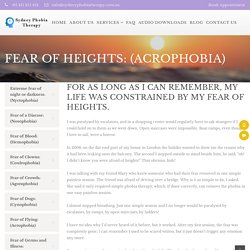 Open staircases were impossible. Boat ramps, even though I love to sail, were a horror. In 2008, on the flat roof part of my house in London the builder wanted to show me the reason why it had been leaking onto the balcony. The second I stepped outside to stand beside him, he said, “oh! I didn’t know you were afraid of heights!” I was talking with my friend Mary who knew someone who had their fear removed in one simple painless session. I almost stopped breathing. Fear Of Flying (Aerophobia) in North Shore, Sydney. My first flight was involuntary. 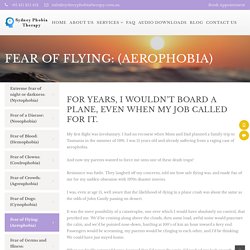 I had no recourse when Mom and Dad planned a family trip to Tasmania in the summer of 1991. I was 15 years old and already suffering from a raging case of aerophobia. And now my parents wanted to force me onto one of these death traps? Resistance was futile. They laughed off my concerns, told me how safe flying was, and made fun of me for my sudden obsession with 1970s disaster movies. I was, even at age 15, well aware that the likelihood of dying in a plane crash was about the same as the odds of John Candy passing on dessert. It was the mere possibility of a catastrophe, one over which I would have absolutely no control, that petrified me. Fear Of Blood (Homophobia) in North Shore, Sydney. I said it to myself for more than 20 years Its a minefield out there. 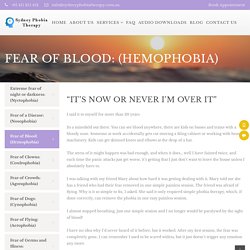 You can see blood anywhere, there are kids on busses and trains with a bloody nose. Someone at work accidentally gets cut moving a filing cabinet or working with heavy machinery. Kids can get skinned knees and elbows at the drop of a hat. The stress of it might happen was bad enough, and when it does… well I have fainted twice, and each time the panic attacks just get worse, it’s getting that I just don’t want to leave the house unless I absolutely have to.

I was talking with my friend Mary about how hard it was getting dealing with it. I almost stopped breathing. Fear Of Needles (Trypanophobia) in North Shore, Sydney. I have been telling myself this story for so many years and have always just put it off. 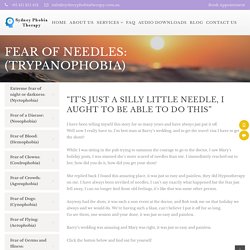 Well now I really have to, I’m best man at Barry’s wedding, and to get the travel visa I have to get the shots!!