Naim SuperUniti network integrated amplifier. I kind of knew it was coming. 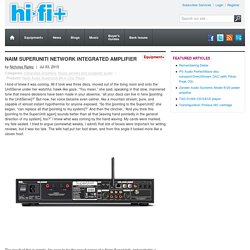 All it took was three discs, moved out of the living room and onto the UnitiServe under her watchful, hawk-like gaze. “You mean,” she said, speaking in that slow, mannered tone that means decisions have been made in your absence, “all your discs can live in here [pointing to the UnitiServe]?” But now, her voice became even calmer, like a mountain stream; pure, and capable of almost instant hypothermia for anyone exposed. “So this [pointing to the SuperUniti]” she began, “can replace all that [pointing to my system]?” And then the clincher, “And you think this [pointing to the SuperUniti again] sounds better than all that [waving hand pointedly in the general direction of my system], too?” The result of this is simple. Technical Specifications Type: Single-box streaming device. Analog Inputs: 1 x 5-pin DIN, 2 x RCA pair, 1 x 3.5 mm front panel jack Sample Rates Maximum: 192kHz (coaxial) 96kHz (optical) UPnP input: Ethernet (RJ45), Wi-Fi Weight: 12.8 kg.

Fon Gramofon review - CNET. Sonos is still undoubtedly the king of multiroom audio, but it can still instill a sense of sticker shock even with its lowest-price items. 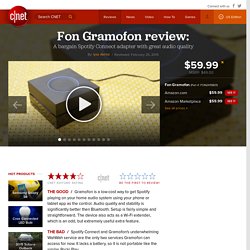 Gramofon is available for $50 (or 49 Euro in the UK, according to the company; Australia availability is still to be determined), which is $150 less than the cheapest Sonos speaker. If you already have a perfectly good audio system and want to use it to listen to Spotify, Gramofon is worth a serious look. It doesn't offer nearly the range of services Sonos does, but if you get your music mainly from Spotify, you might not have much interest in the rest of them. What is Spotify Connect? Spotify Connect is a proprietary system that streams music directly to a Spotify Connect-compatible device and is controlled using the Spotify app on a phone or tablet.

The biggest advantage Spotify Connect has over Bluetooth is that the phone is not tethered directly to the dongle or receiving device. Media Center software. MediaMonkey Standard. Pros Fast rip and burn times. 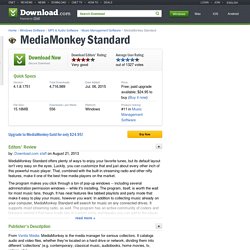 Excellent cataloging and referencing. Easy to use- very intuitive. Does a great job with any audio. Very complete and helpful online Help files; I have always been able to find an answer to my questions. Cons Ripping audiobooks sometimes requires going in to edit the properties. Summary I highly recommend this program. What is FLAC? The high-def MP3 explained. In the late 1990s, one of the original portable music file formats -- the MP3 -- was causing quite a bit of bother. 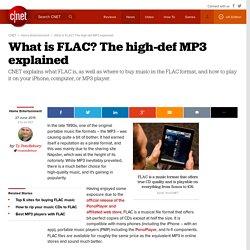 It had earned itself a reputation as a pirate format, and this was mainly due to the sharing site Napster, which was at the height of its notoriety. While MP3 inevitably prevailed, there is a much better choice for high-quality music, and it's gaining in popularity. Having enjoyed some exposure due to the official release of the PonoPlayer and affiliated web store, FLAC is a musical file format that offers bit-perfect copies of CDs except at half the size. It is compatible with many phones (including the iPhone -- with an app), portable music players (PMP) including the PonoPlayer, and hi-fi components. FLAC files are available for roughly the same price as the equivalent MP3 in online stores and sound much better. How to Play FLAC or Other Lossless Audio Files in iTunes. If you buy or download music in FLAC files, you may want to play them in iTunes. 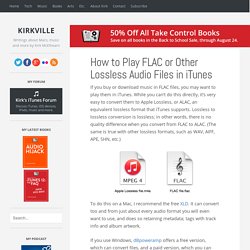 While you can’t do this directly, it’s very easy to convert them to Apple Lossless, or ALAC, an equivalent lossless format that iTunes supports. Lossless to lossless conversion is lossless; in other words, there is no quality difference when you convert from FLAC to ALAC. (The same is true with other lossless formats, such as WAV, AIFF, APE, SHN, etc.)

To do this on a Mac, I recommend the free XLD. It can convert too and from just about every audio format you will even want to use, and does so retaining metadata; tags with track info and album artwork. AVS Audio Converter - convert audio files between any audio formats. Convert your audio for your iPod or iPhone Save audio tracks in M4A format compatible with Apple devices and upload them directly from the program. 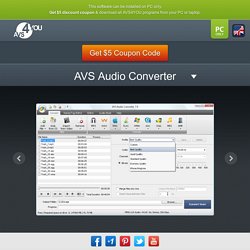 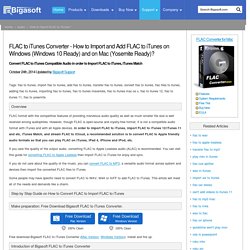 FLAC - documentation. FLAC - download. FLAC File (What It Is & How To Open One) Did you find a FLAC file on your computer and wonder what program should open it? 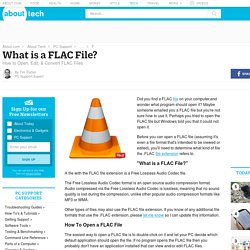 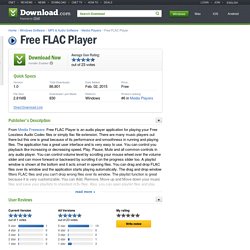 3 Ways to Play FLAC Files. HDtracks - The World's Greatest-Sounding Music Downloads. Recording Formats. In a Linn recording, the company's legendary audio expertise is employed to capture the unique atmosphere and emotion of the original live performance. 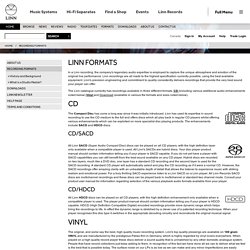 Linn recordings are all made to the highest specification currently possible, using the best available equipment. Linn's precision engineering and commitment to quality consistently delivers recordings that provide the very best sound your player can offer. The Linn catalogue currently has recordings available in three different formats.

CD (including various additional audio enhancements noted below) Vinyl and Download (available in various file formats and sizes noted below). The Compact Disc has come a long way since it was initially introduced. All Linn SACD (Super Audio Compact Disc) discs can be played on all CD players, with the high definition layer only available when a compatible player is used. The original, and some say the best, high quality music recording system. Did you know? Top 6 sites for buying FLAC music. Neil Young's Pono has been in the news a lot recently, but not many people know that the new player is designed as a way to playback FLAC files, primarily those bought from PonoMusic.

While you could wait till the Pono Web store comes online sometime in the next year, there are ways you can get your hands on FLAC music right now. If you want to listen to better-quality digital music, then FLAC files are a great way to do it. They typically use half the storage space of uncompressed music files and should sound identical to music played from a CD. And yes, you can use apps like FLAC Player to listen to them on iOS devices. Or the PonoPlayer of course. Perfect sounds: building the perfect hi-fi. Although a whole range of docks still sell well despite sounding awful, a range of impressive new models, including Arcam's rCube, will provide everything you need in a kitchen or small living room.

One step up is a good all-in-one hi-fi: Arcam again, Marantz and Denon have all cornered a market that is short on space but keen on music. Big names such as Panasonic and Sony have had to raise their game significantly in order to keep up. Where the major brands excel is in one-box solutions, easily available at a good price, that are easy to set up. There is still much to be said for major retailers selling major brands. But for really serious hi-fi, two options remain: a high-end, all-in-one-box set-up such as the NaimUniti, or a traditional separates system. The NaimUniti is one of an increasing number of systems that is able to wirelessly play back a host of digital file formats without sacrificing sound quality. Guide to the Next Generation of Hi-Fi Stereo Systems. Through the late 1980s and 1990s, while hip-hop and grunge music took over the airwaves, another revolution affected nearly every listener, manifested in the way they consumed their favorite songs.

The home stereo system, once a modular system of silver-plated and vacuum-tube-driven components devoted to high fidelity, or Hi-Fi, was replaced by “mini-systems” and “boom boxes;” all-in-one solutions that were more cost effective and took up less space in the home. The compact disc was exploding in the retail world and reeling in customers to repurchase their music collections in digital formats, and the smaller, consumer-market home audio equipment that was available to play this new digital content was rapidly overshadowing the larger, higher-quality components, to conserve that space. During the rise of home theater and DVDs, bringing surround sound into the living room did give consumers a path to continue purchasing modular stereo equipment (known as component equipment).

How should I upgrade my old hi-fi in a digital world? What remains of the stereo system I bought about 20 years ago is a Rotel 820AX amplifier, Mordaunt-Short MS3.3 speakers and a Philips CD player. I own about 20 yards of vinyl – so I need a new turntable – and a somewhat random CD collection. I need to start again. But where? A sub-plot to this sorry tale is that a couple of years ago my wife acquired a Sonos, but one of the speaker units packed up. There are further problems with the Sonos, which I think are due to the inadequacy of our in-house Wi-Fi and my general bafflement over how to make it work. You are not alone: I suspect a lot of Guardian readers have aging hi-fi systems that are not integrated with any newer digital media. The first step is to buy a new turntable, such as the Rega RP1 (£230), which will plug straight into your Rotel 820AX.

I thought the Rega RP1 would be the obvious choice. Either way, the turntable must be set up so that it’s absolutely level, and insulated from whatever it is standing on.