Teachers’ Pets: 3 Devices That Work in the Classroom. While no two educational technology programs are the same, one planning question influences them all: Which device will best serve students’ needs? 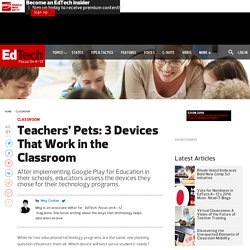 “Some of the things that really excited us about the Nexus 7 and Google Play for Education is the differentiation that could happen,” says Bobby Lehman, an educational technology specialist with the Boulder Valley School District in Colorado. 10 Big Concerns About Tablets In The Classroom. As we look into integrating tablets in the classroom, it’s becoming increasingly clear that buying tablets for the purpose of enhancing learning is very different to buying tablets for recreational purposes such as browsing Facebook and entertainment sites, or even for more serious pursuits such as business or work. 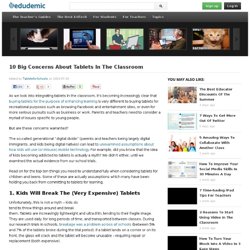 Parents and teachers need to consider a myriad of issues specific to young people. But are these concerns warranted? The so-called generational “digital divide” (parents and teachers being largely digital immigrants, and kids being digital natives) can lead to unexamined assumptions about how kids will use (or misuse) mobile technology . For example, did you know that the idea of kids becoming addicted to tablets is actually a myth? We didn’t either, until we examined the actual evidence from our school trials. Read on for the top ten things you need to understand fully when considering tablets for children and teens. 1. 2. 3. 4. 5. Do BYOD Programs Encourage Bullying? In theory, Bring Your Own Device (BYOD) programs in schools are a great idea; students can use their own tablets, laptops and smartphones in the classroom, and can take advantage of a wider range of apps and programs than they might be able to normally access in school. 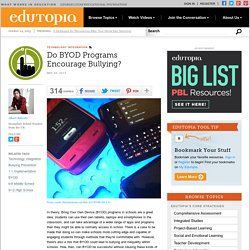 There is a case to be made that doing so can make schools more cutting edge and capable of engaging students through methods that they're comfortable with. However, there's also a risk that BYOD could lead to bullying and inequality within schools. How, then, can BYOD be successful without causing these kinds of problems? The growing popularity of BYOD is a trend that has appeared in the workplace and schools over the past few years; partly, this has been in response to gaps between the technology found at work and school, and what people are using in their spare time. For schools, particularly those whose budgets are struggling to keep up with the pace of technology, BYOD offers cost savings. 4 Big Concerns About BYOD In Schools. The concept of “bring your own device” has been seriously considered by many school districts.

Reducing costs to school districts is one of the most prominent points to the BYOD system. Millions of dollars are spent across the United States in order to update classrooms, labs, and staff development rooms every year. By implementing a BYOD policy, this money can be spent towards other improvements and educational needs. How To Choose The Best Mobile Device For Your School. Last week, even by my standards, was an EdTech overload. I spent a day at BETT 2013 and followed this up with a visit to The Brewery in London for the Apple Education Leaders Summit.

Aside from the fact that they were both free, the two events could not have been more different. Why It's Time To Start BYOD In Your School. I remember fondly, my time as a young and plucky probationary teacher. Exploring the realities of classroom practice and experimenting with new pedagogy. I recall quite clearly the time when my first classroom was equipped with a single desktop computer. Today, it is equipped with 30 desktop computers, a projector, an interactive whiteboard, a visualiser, an A3 colour printer, a laser printer and even a 3D Printer. The Gradual Shift Yet, one could argue that somewhere on this journey, my pedagogy has lost focus and that there remains disconnect between my ambition for interactive learning through technology and the realities of my practice. Let’s explore this concept… From the teacher perspective, the learning environment could be seen as technology-rich, including the integration of teaching aides; an arsenal of technology placed at the teacher’s disposal.

The flipped perspective, from the student’s point of view can be very different. Donald Clark Plan B: BYOD: 7 reasons to leave them to their own devices. BYOD isn’t a recommendation, it’s a realty. 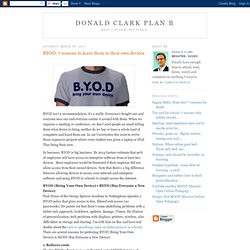 Everyone’s bought one and everyone uses one and everyone carries it around with them. When we organise a meeting or conference, we don’t send people an email telling them what device to bring, neither do we buy or lease a whole load of computers and hand them out. In our Universities few want to revive those expensive projects where every student was given a laptop or iPad. They bring their own.